John McCain Needs A Neuralyzer: Why McCain Is Performing An Encore, Not An Opening Act 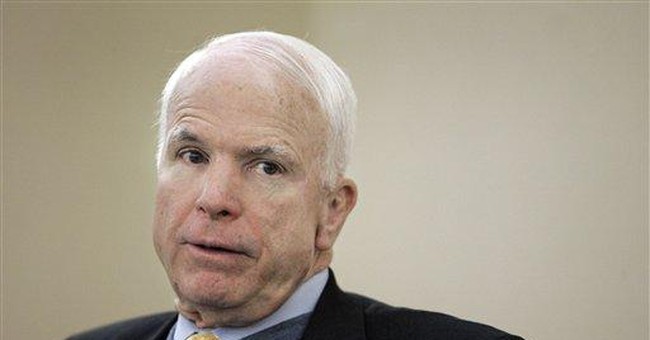 John McCain needs to get ahold of the producers of Men In Black I and II quick. The only way Arizona's longtime thorn-in-the-side of the GOP can claim the Republican nomination is with a neuralyzer, the device the MIB agents use to selectively erase the memory of civilians who have seen the aliens among us at too close a range.

In fact, he's going to need a lot of them as there's a lot McCain has to hope Republicans forget as they head to the polls in Iowa, Wyoming, New Hampshire, Michigan and beyond.

First, they have to forget that the fundraising advantage the GOP built to counter the Dems' union juggernaut was overthrown by the McCain-Feingold campaign finance "reform," and done so in an unconstitutional fashion, proving not only McCain's indifference to the party's success but also to the idea of Free Speech. This bust of a bill also unleashed the 527s on the land, guaranteeing even more secretive and dirty pool politics. Senator McCain's signal legislative achievement turns out to be deeply flawed constitutionally and counterproductive of its announced goals.

Economic conservatives will also have to have their memories erased of Senator McCain's votes against the Bush tax cuts.

The neuralyzer will also have to get to the social conservatives and erase the memory of John McCain's votes against the Federal Marriage Amendment.

The biggest issues for many Republican voters center on immigration and border security. These voters will have to be persuaded to forget John McCain's ill-fated attempted jam down on immigration which McCain ally Lindsey Graham forced through the Judiciary Committee. Not remembering the bill is a bit of a big order since it was known as McCain-Kennedy and was widely understood by conservatives to be tantamount to amnesty.

National security conservatives will have to agree to set aside the fact that McCaiin's grandstanding on the issue of the treatment of unlawful combatants in September 2006 derailed the entire GOP's endgame agenda heading into the elections. The Senate leadership and the White House had agreed on a careful series of legislative propositions on the Gitmo detainees and on surveillance protocols for use when watching terrorists abroad communicating with their allies inside the U.S., an agenda which also included some crucial judicial nominations like the still stalled one of Peter Keisler to the D.C. Circuit of Appeals, an agenda which would have done much to recapture the sense of momentum the upper chamber and the GOP as a whole had lost and which would have focused the public on the war and the role of intelligence gathering in it. Senators McCain and Graham smashed up the entire plan and the Senate majority was erased a few weeks later.

And all conservatives will have to set aside their deep, deep anger over John McCain's Gang of 14 coup that ended the hopes of restoring decency, order and constitutional process to the judicial confirmation process.

Recall what had happened: Serial filibusters were staged by Dems against many Bush nominees throughout 2003 and 2004. The GOP and the president campaigned on the issue of the judges throughout the elections of 2004, and won a 55 seat Senate majority in part on the strength of the outrage on the issue. Majority Leader Frist set about organizing a strategy --the Constitutional Option or Nuclear Option-- which anticipated that a ruling would be requested from the Senate Chair --the Vice President-- on whether or not a filibuster could be used against a judicial nominee. At least 50 of the GOP's 55 senators were pledged to support the chair. A crucial and long-lasting victory would have been won and a principle established.

Days before the vote and the end of the filibusters, John McCain engineered a deal with six other Republicans and seven Democrats which threw some fine nominees under the bus in exchange for a temporary abandonment by Democrats of filibusters against some Bush nominees. The shock and outrage at McCain among conservatives at this awful deal was of a intensity that has rarely been matched. John McCain in effect undid the vote of 2004, compromised away an issue he had not been asked to lead on and on which millions of Republican voters had voted and for which they had contributed. Millions of Republicans care deeply about judges. John McCain did not. He could not allow Majority Leader Frist his victory, but in sabotaging Frist, he sunk his own candidacy. The one issue on which all three core GOP constituencies agree is the importance of originalists on the bench. It was obvious amid the wreckage brought about by the Gang of 14 that John McCain didn't care about the courts. He cared about John McCain.

The neuralyzer will have to be set to be careful not to obscure the memory of John McCain's heroic service and painful sacrifices during his long imprisonment, and it will have to leave the memory of Senator McCain's steadfast support for victory in the war. He is truly a great American.

The independents and the newspapers of New Hampshire love the idea of a McCain candidacy. Some are giving a last salute to McCain for his wartime heroism. Others are expressly attempting to stop Mitt Romney's momentum for the reason that the same newspaper tried to stop Ronald Reagan in 1980 --Romney has the best chance in November.