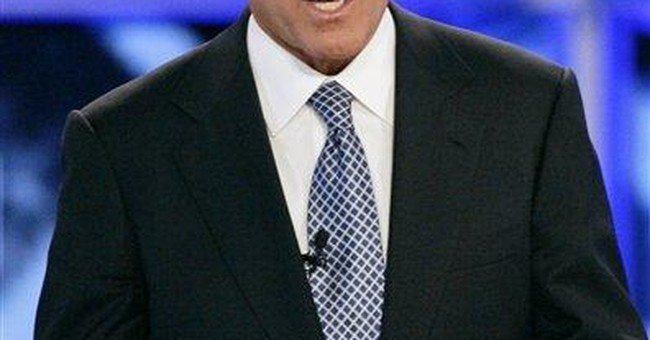 "It looks as if we just beat those campaigns in Iowa two months earlier than we had planned on beating them."

--Romney for President spokesman Kevin Madden on the decision of Rudy Giuliani and John McCain to “skip” the Ames, Iowa straw poll.

The first Republican presidential debate was at the Reagan Library on May 3, 2007. The third was on June 5, 2007 in New Hampshire. In the space of one month and a day, former Massachusetts Governor went from fundraising frontrunner to a dead heat with the other two and a half candidates for the GOP nomination: Rudy Giuliani, John McCain and Fred Thompson.

John McCain opened the year as the MSM-anointed front-runner for the Republican nomination and has faded so quickly as to defy comparison with past political collapses. To be sure other early favorites –including Mitt Romney’s dad—have faded, but never more than six months before the first vote in the first primary is cast. Senator McCain’s long record of sharp sticks in Republican eyes –McCain-Feingold, the Gang of 14, two immigration bills co-authored with Ted Kennedy (and that’s just part of his record since George W. Bush took office)—has not only crippled his campaign, it has done so in record time. Staff lay offs and plummeting cash receipts make it likely that Senator McCain won’t even compete in Iowa’s caucuses, much less the huge set of early primaries. Announcing that he wasn’t going to compete in Ames was a warm-up. Look for an early and hopefully graceful exit from the campaign to allow the senator to concentrate on rallying support for the war.

Rudy was a solid front-runner as the second quarter opened, on top of most polls and a respectable second in dollars raised behind Romney’s. Then came a tough debate in Simi Valley and increased scrutiny of the former mayor’s social policies, especially abortion. Rudy delivered a very strong performance in the New Hampshire debate –helped along by some lightning—but then he too all but declared the campaign in Iowa over with his announcement yesterday of the decision to “skip” the Ames straw poll. That he did so on the day after a good debate showing, thus stepping on his favorable story, hints at the lack of professionalism in campaign management that could be trouble down the line. Pulling out of Ames does more than hint. It declares that Rudy can’t close the sale with traditional social conservatives --yet.

Fred Thompson is the bear in the woods, but when the bear came out of the woods in Newport Beach, California on May 4, he wasn’t very scary. Wrote Robert Novak the following Monday:

"It was not Reaganesque.” “No red meat.” "Too low key." That was the preponderant reaction I heard to Thompson's half-hour presentation (leavened by a few favorable comments, mostly by women, that he was more "statesmanlike" and "presidential" than the announced candidates). Lincoln Club members, like many conservative Republicans, have been unimpressed by the existing field of Republican hopefuls and envisioned Thompson as the second coming of Ronald Reagan. They did not get it Friday night.

Suddenly Big Fred was just another candidate, and an undeclared and underfunded one at that.

By contrast to his competitors, Mitt Romney spent the last month going from win to win, beginning with an appearance on Jay Leno’s show the night before his Reagan Library victory, and concluding Monday night with a Frank Lutz-supervised, focus-group blow-out: a big “Romney won” exclamation from a collection of people-meter-equipped voters convened to judge the proceedings on the stage in New Hampshire. They loved Romney. Scored him off the scale. The MSM left the Granite State debate thinking that their darling John McCain had triumphed despite the Arizona senator’s astonishing dismissal of “fences and barriers” on the southern border and still unpersuaded that abortion matters in Republican primaries.

Luntz’s focus group gave Romney the sort of scores that candidates dream of and local papers write up when they arrive in the SAT results. They especially approved of his answer to the “Mormon question,” a hint that ordinary Americans deeply resent such inquisitions.

Welcome to the Beltway-America disconnect. Even the questions posed by MSM don’t begin to scratch the intense interest many Americans, and most Republicans, have in such super-charged issues as illegal immigration and the threat of domestic terrorism. Giuliani and Romney are separating themselves from the field –and Thompson might as well—because they look like candidates willing to take it to the Democrats, not treat with them. The MSM agenda journalism is actually helping them by refusing to ask the Democrats the sort of questions that really matter while peppering the GOP candidates with the inquiries the left think crucial.

Here is the secret of Campaign 2008: Republicans are sick of being patsies, especially when confronted with the likes of Harry Reid and Nancy Pelosi, Hillary and John Murtha, and everyone in the MSM. GOP voters don’t want any more deals, any more “grand compromises”, any more apologies for winning the past two presidential elections and for believing in victory in war. They are looking for a candidate unafraid to defend the idea of winning in Iraq, confronting the nutters running Iran, or of securing the border. They want a spokesman eager to defend the inherent good of America against European elites, a candidate willing to speak boldly on behalf of marriage, children, and faith.

They want another Reagan.

Thus far that candidate has been Mitt Romney, with Rudy Giuliani in a very close second. The former had the best month, the latter a close second. Rudy stumbled by refusing a contest in Ames. Reagan wasn’t the sort of candidate to pass by challenges. Perhaps Rudy will reconsider.