The Fred Factor and the Al Davis Republicans 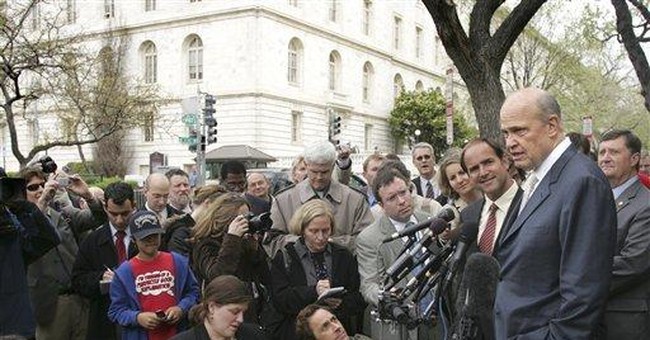 "[Thompson] is sure to face sharper criticism from those who say that his eight-year Senate record was undistinguished and that his credentials as a conservative are marred by his support of campaign finance reform. Some also say he is a lackadaisical campaigner, pointing to his sometimes rambling maiden speech last month in Orange County, Calif., as evidence that he is overhyped.

Republican pollster Neil Newhouse, who helps conduct the NBC-Wall Street Journal Poll with Democrat Peter Hart, said an analysis of their most recent poll indicated that Thompson's entry could initially hurt Giuliani and McCain."  --a Michael Shear and Dan Ballz story in The Washington Post, 5/31/07

It is different in the pool. There are elbows, and reporters, and opposition research.

But from the perspective of a columnist and talk show host, the entry of Fred Thompson into the race is a great day. The sooner the GOP debates get down to the big four (plus Newt if he gets in) the better. Senator Brownback, Governor Huckabee, and Congressman Hunter are fine men and serious public servants, but if you can’t get over 10% in even one state poll from among the first four states in which contests will be held –Iowa, New Hampshire, Florida and South Carolina—you shouldn’t be in the first tier, and only the first tier should be taking up prime time in the months ahead.

Many of my blog readers think I am in the bag for Romney based on my book’s disclosure that if the California primary had been held the day the book appeared I would have voted for Romney. That assessment still holds, but as the book noted, campaigns are long, strange affairs. People cry in the back of trucks. Candidates grab microphones and fall off stages. Even presidents can make astonishing errors in their appearances, and they have the best advance team in the world. So a lot can happen between now and next January and February.

Fred Thompson is yet another entrant in the GOP lists who is serious about the war, making that unanimous agreement among the GOP top tier versus a unanimous endorsement of retreat and date certain defeat among the Democrats. There’s the defining issue f the general campaign.

One of the defining issues of the primary campaign will be the immigration bill, and it has defined John McCain right out of his already thin chance to be the nominee. He has now added McCain-Kennedy 2.0 to McCain-Feingold, The Gang of 14, McCain-Kennedy 1.0 and the display of pique last September on the trial and treatment of terrorists in an impressive bid to antagonize every conservative on at least two grounds. I don’t think he makes it to Iowa and the humiliation of fourth place finishes there and in New Hampshire. As the Post notes, Thompson bleeds McCain immediately, giving all the early McCain boosters who thought they were signing up for a front-runner certain to benefit from the GOP’s “next-in-line” tradition of nominees a chance for a Mulligan. Do-overs are rare in politics, but the unexpected arrival on the scene of an “old friend” presents just such an opportunity.

Mayor Giuliani and Governor Romney might lose some folks as well, but their supporters signed up for something completely different than a coronation, and thus far they are getting exactly what they ought to have expected: vibrant and interesting campaigns by candidates of the sort that don’t normally show up in the GOP primaries.

Fred Thompson arrives with many on the sidelines whispering Reagan. Perhaps, but just perhaps. President Reagan was a Californian, not a southerner, an upbeat and sunny optimist who had spent 16 years on the chicken circuit helping the party, and having made one unsuccessful run for the GOP nomination. Few Republicans every thought to raise questions about Reagan’s fire in the belly.

What Republicans really want is a candidate capable of handling the coming onslaught. There is a great fear in the GOP that Hillary is approaching with Bill in the sidecar and Senator Obama on the bottom of the ticket, MoveOn and Kosputin whipping the fever swamp into a frenzy and Soros pouring his last cent into his last play. Thompson as Reagan meant for a lot of these people not Thompson as a conservative's conservative, but Thompson as a powerful candidate capable of summoning a huge outpouring of energy and enthusiasm from the base and the old Reagan Democrats alike leading to a big win as in 1980 and 1984. Couldn't we please have a candidate who could establish and keep a lead like the Gipper.

Except, of course, Ronald Reagan did not establish and keep a lead in 1980. Until the last few days of the race, President Carter and Governor Reagan were viewed as neck-and-neck in a race too close to call. There isn't any reason to believe that Fred would have any easier a go of it than Rudy or Mitt, and as that becomes obvious in the days and weeks and months after his entry, the folks hoping for an easy win are going to drop that enthusiasm and start looking hard again at all three, asking which one is the best candidate.

These are the Al Davis Republicans --"Just win, baby"-- and their support will be decisive in 1Q08. One reason I suspect the Fred boom may be over before it has even really begun is the recognition that on the stump Fred will be seen as the southerner he is --slow, folksy, plain spoken. In a year when an anti-Bush may be needed, a Brooklyn-born Mob-busting tough guy, or the hyper-intelligent, hyper-eloquent investment banker turnaround executive may emerge quickly as far more likely to be the "something completely different " that Reagan was in 1980, and thus the strong preference of the Al Davis GOPers.

Too early to say, and besides, no one in my business would want a rout one way or the other. A long campaign of intense debates and lots of press attacks and parries is exactly what the eventual nominee will need to be in fighting shape for the fall of ’08. Hillary is not going to get bloodied along the way as Senators Edwards and Obama know better than to poke that nest. She’ll process to Denver, and then when the storm arrives we’ll see which party had the better approach.