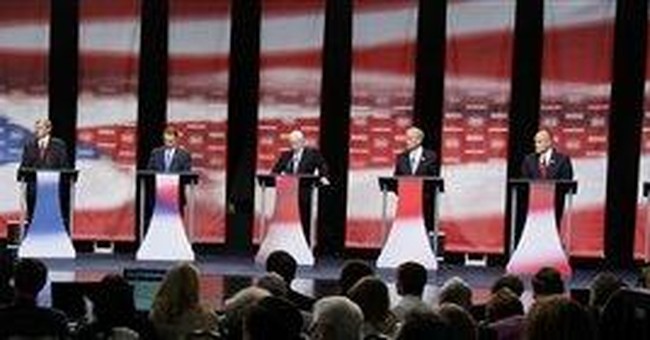 The ten declared GOP candidates for president next gather on May 15 in Columbia, South Carolina. Brit Hume of the Fox News Channel’s Special Report will moderate, and will be joined by the Fox correspondents Chris Wallace and Wendell Goler. The audience will not be spared the unwieldy number of candidates, but at least the questions will have to be less odd than some of those offered up by Chris Matthews.

Given Mitt Romney’s performance in the first debate and the kudos he earned from across the spectrum of pundits, expect the other nine to find some opportunities to take some knocks at the former Massachusetts governor. Expect more “gates of Hell” declarations from Senator McCain who has very little else to offer conservatives who haven’t forgotten or forgiven McCain-Feingold, the Gang of 14 or McCain-Kennedy.

But there will almost certainly be two big subjects for the Fox Three to probe. The first will be Rudy’s abortion stance(s).

By the time we get to Tuesdays night, Rudy will no doubt have retooled his abortion response to something along the lines of:

“You know what voters care about when it comes to abortion and the presidency? They care about judges. I haven’t been particularly effective in getting my message out on this, as my friend Ted Olsen has been kind enough to point out to me. Ted and I have spent a lot of time, a lot of time, talking about judges, and about the sort of judges that my old colleagues from Ronald Reagan Justice’s Department have turned out to be, and of course I am talking about Chief Justice Roberts and Justice Alito and also Judge Mike McConnell and now retired Judge Mike Luttig, although Mike was at the White House when I was over at Justice. Most of these men were ten or more years younger than I am when I was #3 at Justice and then when I went up to New York to take on the mob as the United States Attorney there. But I can tell you this: W knew how to pick legal talent, and how to find originalists, and that’s who I am going to put on the bench as president and I think that’s what people want to know when it comes to abortion and the presidency.”

When the follow-up comes about the Planned Parenthood contributions, Rudy should respond,

That should be his story, and he should stick to it.

The second news hook for the panel will be Al Sharpton’s outrageous slam at Mormons. In a “debate” with Christopher Hitchens this week, Sharpton declared:

“As for the one Mormon running for office, those who really believe in God will defeat him anyway, so don’t worry, that’s a temporary situation.”

The YouTube post of the audio is here. Hume and company will almost have to bring this up to Romney for a reaction.

Romney has been asked and has answered hundreds of questions about his LDS faith by now, many of them by me in A Mormon In The White House. He has proven very, very patient with journalists who are knowledgeable about the church as well as with the ill-prepared. He has refused to take offense, but he has also refused to allow his campaign to become the focus of a theological debate. His affable refusal to give the “big speech” that many lazy observers intone is a prerequisite to seriousness has been accompanied by record fundraising receipts and rising poll numbers in Iowa and New Hampshire.

But Sharpton’s repulsive aside –so very much like the disgusting display of bigotry by Imus which provoked so much outrage by none other than Sharpton—may be the occasion for Romney to tutor the press about how the nearly 6 million Mormons in America are, like any other racial or religious minority—full citizens deserving of the respect of their fellow citizens. “Take any shot at me you’d like,” Romney might say, “but folks like Al Sharpton ought to be called on their bigotry, just like Imus was, and by the same people who condemned Imus.”

Perhaps neither question will get asked, and certainly there are many others that need asking –Iran with nukes?. But Tuesday night will be another significant conversation with the republican electorate, this time moderated by one of journalism’s serious people. Be sure to tune in.