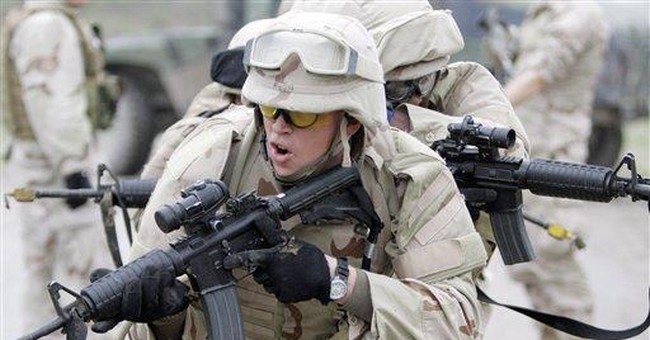 “The Enemy Has Successfully Denied The Western Media Access To The Battlefields”: The Case For Milblogging

When Marine Corps General James Mattis remarked to a reporter on December 23rd of last year that the enemy had “successfully denied the Western media access to the battlefields” of Iraq, he was right. But the enemy had not denied the homefront information from those battlefields because of the vast network of computers and blogs operated by the men and women in uniform serving in the theater who kept pumping out crucial information to their families, friends and admirers back in the States.

When four months earlier General John Abizaid had told me in an interview that “it would be a huge help for everybody if we started talking about our enemies out here, what they stand for, what they want, what their vision of the world is, why they're dangerous, and how this is a worthy fight to fight at this level now, rather than letting it wait to get worse,” I realized that thousands of soldiers, sailors, airmen and Marines were doing just that via their milblogs such as MudvilleGazette and their e-mails to civilian bloggers such as Powerline, Instapundit, CaptainsQuarters, Michelle Malkin and me.

The MSM might have been denied the battlefield because of the risks involved –though some like Michael Yon, Bill Roggio, and John Burns were not deterred—and the anti-Bush media might have refused to talk about our enemies or the worthiness of the fight, the men and women of the American military never stopped reporting on the war or describing in detail the nature of the enemy or the ebb and flow of the battle.

It was the first war in which the military itself was providing the data, and not through the press officers though they have mostly tried to help the public understand the stakes, but via the privates and sergeants as well as the officers at the lower ranks. The milbloggers, in short, have done an extraordinary job of keeping the home front not only safe but also informed. I cannot imagine what the public would think of the war if this vital flow of information –solid, reliable, realistic information—had not been flowing back to the homefront for relay and rereading by the millions of Americans skeptical of the MSM’s ability or willingness to report on the war in anything approaching an objective fashion.

Now, in a stunning admission of almost impossible to believe incompetence, the Army has announced henceforth the blogs will fall silent unless the entry has been preapproved. E-mails to civilians as well. In short, the Army is abruptly ending operations on a key portion of the battlefield –the fight for American public opinion.

Matt at Blackfive has been most eloquent about the absurdity of this policy, though the posts denouncing it across the blogosphere have been growing by the hour. Appearing on my program, Alabama Senator Richard Shelby declared the obvious reaction of most people when he said “I think we ought to hear from the soldiers.” “We should not try to shut up our soldiers,” he added. “They’re in harm’s way, they’re carrying the brunt of this, and their families, and we should support them, and we should listen to them.”

“Operational Security” concerns are said to be behind the ban, but I know of no breach that has led to an injury or a death, and as retired Marine Corps Mike McBride said on my program, some casualties would be acceptable in light of the huge benefit the milblogs and e-mails are bringing to the war effort. That’s for the professionals to decide, but an out-of-the-blue lightening bolt of censorship just doesn’t strike those of us who have been reading the milbloggers since before the war began as an expression of concern over security. Rather, it seems to most of us to be an act of exasperation by senior military brass with a new development not encountered before. Troops have always grumbled, and troops have always written home, but troops have never had this kind of reach or volume before. It looks like the patience of someone grew too thin, and in a very ill-conceived and sudden move, a key bit of battleground was simply ceded to the bad guys.

No, the Army unilaterally disarmed itself, and appeared to do so in a sudden spasm. Hopefully its senior leadership will see the reaction and immediately suspend the new policy pending a thorough review that includes milbloggers, civilian information specialists, and military strategists and historians. The American military has never been in a war like this before, and it cannot possibly think it has the expertise to judge the importance of this troops-to-the-homefront information flow. Maintaining public support of the effort through the truthful accounts of the troops’ lives, or losing that support via the same, is a core value of the milbloggers.

Generating connection between, and support of civilians for the military are two other values. Groups like SoldiersAngeles, the SemperFiFund, the United Warrior Survivors Foundation, and Fisher House have sprung up and grown deep roots in the civilian world largely because the troops and families they serve have been able to communicate with the homefront, and have had their stories told and relayed through the blogosphere and on into MSM. Shutting down the milblogs and the e-mails from the military is an act of astonishing indifference to these connections.

For many reasons, the new Army policy is a serious mistake. Let’s hope the Army’s leadership recognizes this and moves quickly to reverse the new policy, or that the president or Congress will insist that they do.