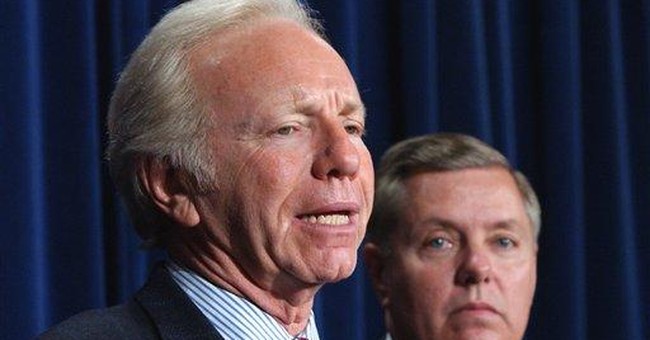 The escalating defeatist rhetoric flowing out from Congressional Democrats illuminates a crucial fact: The momentum has shifted in Iraq, and the Petraeus offensive is increasingly recognized as at least potentially successful in producing an Iraq that is stable politically and competent to suppress both al Qaeda and sectarian ethnic cleansing. The change in the wind petrifies Democrats who bet their political futures on the inevitability of defeat of our mission and violent chaos in the wake of our departure. To have played this contemptible game would be risky enough even if defeat followed, but to have done so when the tide had turned could and should expose the party as the collection of feckless and partisan hacks it has become.

Harry Reid knows this, and has thus abandoned any pretense of caring about victory or of providing General Petraeus with the support he and his troops so abundantly deserve. Others have catalogued just how complete the Majority Leader’s evolution into defeatist cheerleader has become, and there is no reason to expect he will do anything except continue the war against the war throughout the summer and fall, and perhaps even risk the cut-off of all funds to our forces.

There are four fine pieces of analysis available to anyone seriously interested in understanding what is happening in Iraq, three reported on by contributors to the Weekly Standard who traveled to Iraq in the recent past and spent considerable time with General Petraeus and in the field with American forces. The three pieces of reporting are by Max Boot, Reuel Marc Gerecht, and Fred Kagan. The fourth is a summary of the three pieces with additional analysis by blogger Wretchard of The Belmont Club.

Taken together, the reports of progress and the obvious attempt by the Reid-Pelosi-Murtha Democrats to undermine the American mission before it can succeed put a heavy burden on one man –Connecticut Senator Joseph Lieberman. It is increasingly obvious that if the political war in Washington is to be stopped from hurting and possibly fatally crippling the war against the Islamists, Senator Lieberman is going to have to change parties, pulling a reverse Jim Jeffords. (Whether any other Senate Democrat is a potential switcher is impossible to say, but Senator Lieberman certainly understands the stakes and has fought the good fight for years now.)

I don’t think any amount of political payoff could tempt Lieberman as it did Jeffords. The switch would not be because of a desire for more special ed funding or some set of perks he just cannot get from the Dems. Of course he’d want seniority and leadership, but the motivation would have to be the obvious: He can stop the war from being lost and he understands the consequences of such a defeat. Indeed, every single Democratic senator has to realize that their ongoing support for their caucus is encouraging the enemy, undermining the mission and demoralizing the troops.

But more than any other Democrat, Lieberman knows what will follow in the wake of an American defeat. He knows what either an Iraq governed by radical Shias and death squads or a fractured Iraq that hosts in its Sunni regions a flourishing al Qaeda would spell for the neighboring states and ultimately for Israel, Europe and eventually the United States. He knows as well that a nuclear Iran has to be confronted and its ambitions denied or the world will lurch towards unimaginable horrors.

On Tuesday I interviewed journalist and author Lawrence Wright, long a contributor to The New Yorker. Wright’s The Looming Tower won the Pulitzer for general non-fiction last week, and its chilling account of the rise of al Qaeda awakens any objective reader to the facts that this worldwide Islamist threat is not the creation of the Bush presidency, and more than retreat from Iraq would stall its growth or limit its appeal. There is no alternative to fighting it wherever it appears, just as there is no alternative to cabining Iran’s ambitions. (The transcript of Tuesday’s interview with Wright is here, and the audio here. A two-hour interview with him from last September is here, and the audio of that program is here and here.) Wright’s September 2006 New Yorker article, “The Master Plan,” on the grand strategy of the new generation of al Qaeda is more evidence that we have no alternative to victory in Iraq, and that the Democrats’ proposed course of action is simply suicidal.

Joe Lieberman knows this. Indeed, anyone who reads seriously about the enemy and the various fronts in the war knows this and many other hard truths as well.

If Lieberman led a small band of serious Democrats who were effectively restraining the party’s defeatist extremists, his continued stay among his life long friends and colleagues could be understood as far more comfortable for him and far more useful in the long run as the Democratic Party struggles to keep the hope alive of a Scoop Jackson/JFK/Truman wing of the party returning to some influence.

But that isn’t in the cards. General Petraeus needs the balance of ’07 and ’08 to give our forces a fighting chance to win a fighting victory. If Senator Lieberman crossed the aisle and caucused with the Republicans, the Reid-Pelosi charade would instantly halt and with it the daily undermining of the war. The House Democrats elected on a platform of national security seriousness would also be empowered by the return to their joint conferences of senators committed to victory not defeat on a date certain.

Joe Lieberman knows the score and he knows his own ability to preserve the progress already being made in Iraq and the possibility of victory. He would endure incredible hatred if he was to switch and it would take enormous courage to walk that road.

But if he really does understand the stakes and really does believe the statements he has made over the years –and I think he does—he has run out of time and the choice is stark and immediate.

I Know Exactly Who Is To Blame for This New Wave of COVID-19, and I Know Who Is Making a Fortune on It
Townhall
This. Guy. GETS IT. --> Hardhat intellectual RAILS on societal ignorance (sheep?) over Biden, CDC recommendations, and forced vaxxing (watch)
Twitchy
Alexander Vindman Stomps His Little Feet When Americans Show They Don't Care About His Book
Redstate
Mexico's Turn: The Border Mess Is About to Get Much Worse
PJ Media