An Amici Curiae Without Precedent 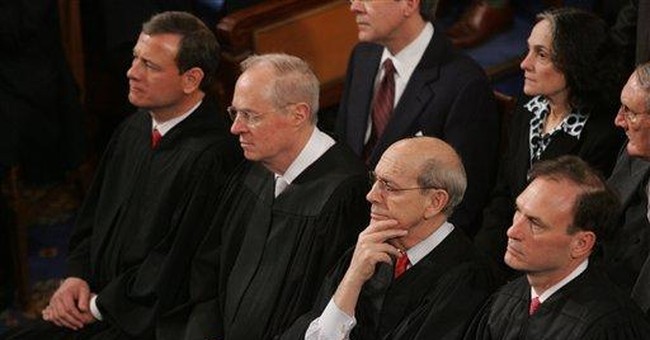 Mr. Chief Justice Roberts and Mr. Justice Alito, I hope you will forgive the rather irregular method I am employing to file my amici curiae in the above-referenced case. My guess is that you and your clerks are pretty overwhelmed with friends of the court filing briefs on every conceivable angle in this matter, so I thought, “Why not use the web to get a word in edgewise?” Someone on the court in some capacity must read the blogs, and this way seems about as likely as the formal procedures to bring a point of view before you.

I taught my ConLaw students the campaign finance cases this week, and, as is always the case, the dazed looks on their faces were even more puzzled than usual. I am of course aware that the blame for this could rest completely at my feet, but I think we all know that beginning with Buckley v. Valeo, your predecessors haven’t exactly been kind to the idea of “Congress shall make no law…abridging the freedom of speech.” Oh, I explained the decision of course, and the distinction between an incumbent-imposed limit on contribution and one on expenditure, but the wreckage of reason and principle that have been left in the wake of Buckley and its progeny, well, let’s just say my students and all law students (and increasingly the public) know that these decisions have Plessy, Lochner, and Korematsu written all over them The politically ambitious among the students are sighing over the prospect of campaigns conducted under the watchful eyes of the FEC legions, and weary already at the prospect of tens of thousands of fund-raising calls mounted over the course of an even moderately successful political career. Those that are simply civic-minded are asking "When did the protection of entrenched power become a 1776/1789 value?"

I wonder: How many fundraising calls do you think now retired Senator Jim Talent had to make in his three races in six years in Missouri? Or Senator John Thune in his two races in four years? Or any elected official with a big state race and a big budget to meet if they are to be competitive? Or even the small district guy or gal who gets up a head of steam to run only to find the rich dilettante declared and fully-funded and standing –empty-headed—across the path to office? Doesn't every incumbent get a built-in advantage? Did the Framers intend the equivalent of the Members of Parliament to have a home field advantage equal to millions of dollars?

How do you think the efforts of Talent or Thune or a thousand other candidates compared with those of John Corzine in his recent runs for governor and senator in New Jersey? Governor C’s got some pretty deep pockets, but your colleagues have written us into the corner where he gets to run on the strength of his bank account while the middle class and even the upper middle class have to beg from dawn until dusk. The problem is bipartisan. Mitt Romney is a talented guy, as is Dianne Feinstein, and both have benefited from sizeable bankrolls. Is that what the Founders had in mind: The entrenched advantage of the rich over the poor or the rising?

That problem’s getting worse, of course. In the old, pre-1976 days the civic-minded but politically inept could dig deep and send forth talented stand-ins with a series of checks that assured them of viability. Think Edmund Burke. No more. Now the super rich and ambitious have a head start on gaining office and running the country even greater than the traditional advantages bestowed by wealth. Considering the built in advantages that wealth brings, many middle class candidates would rather challenge Tiger Woods to match play and hope he sleeps in than go up against a well-heeled opponent in an election.

That’s among the least of our problems of course. So much core political speech is being chilled by fear of crossing the boundary of some obscure FEC regulation that the millionaire’s advantage is really not the greatest weight on our speech.

The real problem can’t be seen that easily.

I read the students the opening to Justice Kennedy’s dissent in Nixon v.Shrink Missouri Government PAC:

The Court’s decision has lasting consequences for political speech in the course of elections, the speech upon which democracy depends. Yet in defining the controlling standard of review and applying it to the urgent claim presented, the Court seems almost indifferent. Its analysis would not be acceptable for the routine case of a single protester with a hand-taped sign, a few demonstrators on a public sidewalk, or a driver who taped over the motto on his license plate because he disagreed with its message. Surely the Court’s approach is unacceptable for a case announcing a rule that suppresses one of our most essential and prevalent forms of political speech.

The plain fact is that the compromise the Court invented in Buckley set the stage for a new kind of speech to enter the political system. It is covert speech. The Court has forced a substantial amount of political speech underground, as contributors and candidates devise ever more elaborate methods of avoiding contribution limits, limits which take no account of rising campaign costs. (Emphasis added.)

I think Justice Kennedy’s argument in this opinion is the most important one he has ever penned, and I hope you will consult it again and again as Wisconsin Right To Life moves to a decision. Lots of commentators like to proclaim this or that case as the key one of this or that term, but I have to say, rarely have two relatively new justices faced such a choice as the one before you two in this matter. You can return American politics to the situation the Framers created and clearly intended, or you can endorse the hokum of 1976. The ill effects of the status quo are so tremendous that I hope you will join Justices Kennedy, Scalia and Thomas in a giant “Oops,” and return the right to say whatever an American wants to say, whenever he or she wants to say it, and at whatever cost he or she wants to spend back to the central position it enjoyed from 1789 until 1976.

Many of us share a respect for the caution that should inform all the Court’s work. Patience is a virtue, even when the law if badly off course and the need for correction urgent. I don’t often hope for the immediate repeal of thirty years of precedent. There are only two other areas in which I hope for such departures.

But if ever there was an occasion for a sharp break with a sad jurisprudential past, here it is, for restraints on political speech are restraints on the debate about all issues. Every single controversy is bound up in this one, and the error of Buckley is the error that touches every dimension of political life in America.

The political system that could otherwise be relied upon to bring about change via statute and amendment is itself trussed up by the incumbents who are in no hurry to restore competitiveness to the electoral landscape. The inmates are indeed running the asylum, and the challengers are locked out by the aftermath of Buckley.

We lost in 1976 the full and fair and absolutely free political debate that had been the legacy of the revolution. Bureaucrats arrived to replace candidates, editors and the public as judges of what could be said and by whom. The gag order entered then on every American has grown broader with each passing year as the inevitable distortions that follow a market restraint began to build and then spread. Now George Soros and his friends –who don’t mind hiring the lawyers and gaming the rules—are in the saddle, and the spontaneous speech that has long characterized American politics begins to erupt only to be tamped down by worries about registration, incorporation, reporting and safe harbors.

You two can change that, and with a very simple stroke of the pen. Simply declare that the First Amendment meant what it said, and if the public wants a different system for campaigns, the public will have to amend it.

If you do not join with Justices Kennedy, Scalia and Thomas now, the moment will pass. Once you embrace the Buckley fiction, you own the distortions –the tens of thousands of distortions—Buckley had bred. “You break it, you bought it,” is the old saying. You endorse contribution limits on some theory in 2007, it will be very difficult to walk away in the future. This is indeed a very unique moment. You two can change American politics for the better in an instant and without apology.

Clarity is a wonderful thing. Restore it to campaign finance, please. Send the incumbents on an equal footing to the people, and every candidate to their purses and their sponsors as equals. Return free speech to its place --first among equals in the rights guaranteed in the Bill named for Rights.