Giuliani’s Judges: The MSM Gets Out Its Carving Knife 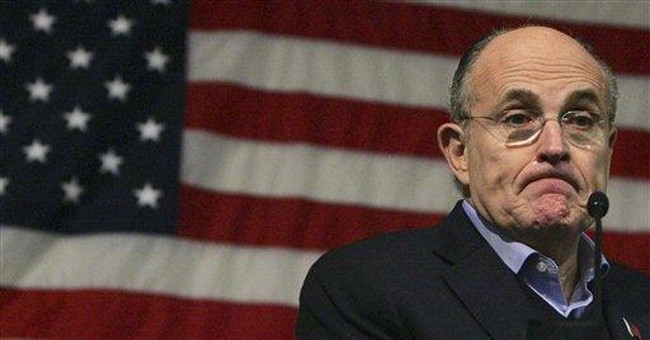 First it was Mitt Romney’s turn, and the weeks of January and February saw story after story on Romney’s alleged flip-flops and pandering. Conservative pundits pining for a different candidate joined in, and the memory of Romney’s very good 2006 dimmed. (Not the contributions and endorsements, though, and when this month comes to a close, the first round in the money primary will be very interesting to judge.)

Now the knives have come out on Rudy Giuliani, and today’s article in Politico on the mayor’s appointments to the judiciary while serving as mayor is a stunner. Key graphs:

A Politico review of the 75 judges Giuliani appointed to three of New York state's lower courts found that Democrats outnumbered Republicans by more than 8 to 1. One of his appointments was an officer of the International Association of Lesbian and Gay Judges. Another ruled that the state law banning liquor sales on Sundays was unconstitutional because it was insufficiently secular.

A third, an abortion-rights supporter, later made it to the federal bench in part because New York Sen. Charles E. Schumer, a liberal Democrat, said he liked her ideology.

Cumulatively, Giuilani's record was enough to win applause from people like Kelli Conlin, the head of NARAL Pro-Choice New York, the state's leading abortion-rights group. "They were decent, moderate people," she said.

"I don't think he was looking for someone who was particularly conservative," added Barry Kamins, a Democrat who chaired the panel of the Bar Association of the City of New York, which reviewed Giuliani's appointments. "He picked a variety from both sides of the spectrum. They were qualified, even-tempered, academically strong."

I argue in my new book, A Mormon In The White House? Ten Things Every American Should Know About Mitt Romney, that reliability on judges is the second most important issue for republican voters. A commitment to victory in the war is by far the most important issue, but seriousness about who goes to the Supreme Court is the second most crucial issue, and all the rest are distant. The reason is the ages of the sitting justices. George Bush might yet get an opportunity to appoint a third justice, but if he doesn’t the next president will almost certainly have multiple appointments. The nomination and confirmation of Chief Justice Roberts and Justice Alito only guarantees the court remains closely divided for a period of time, and it could move decisively to the left or right by 2012, and remain there for a decade or more.

The inability of John McCain to regain the momentum he enjoyed in 2000 is primarily the result of the horrific choice he made in torpedoing the “constitutional option” in the spring of 2005 when he first declared against it, and then assembled the Gang of 14. The wreck of his presidential ambitions occurred then, even though Beltway-Manhattan elites still don’t understand how grievous McCain’s self-inflicted political wound was. Just as President Bush’s nomination of Harriet Miers deeply damaged his second term, McCain’s display of disdain for the importance of the courts permanently alienated large numbers of conservatives who see the court as the great engine of destructive power when it comes to many cherished rights and to the traditional culture.

Which is why Rudy Giuliani needs to respond in detail to the Politico’s barrage. Just last week I spoke with the mayor about judges. Here’s that exchange, which I reprint because of its importance in light of the Politico piece:

HH: You know, you picked up Ted Olson’s endorsement, taking a digression. That’s a big deal. Will he be playing a role in your campaign?

RG: He sure will. I mean, Ted Olson is someone I have…first of all, he’s a very, very good friend. I mean, he’s someone…he’s been my friend since those days, and we’ve been through a lot together. Yes, Ted will play a very big role in my campaign, and I mean, if Ted weren’t my very, very good friend, he’d be somebody I’d still want to rely on as probably one of the biggest experts on the Constitution in this country, and the person who probably has argued before the Supreme Court more than anybody I know.

HH: He or Judge Starr, one of those two are the two most…

RG: He or Ken have probably argued before the Supreme Court more than anyone that I know, and their knowledge of it is remarkable. I mean, it’s a great asset to anybody.

HH: Will he help you pick judges if you are the president, and you’re making Supreme Court selections?

RG: He’d be one of the first people that I’d turn to for advice and help and assistance. And I was involved in the Reagan administration in the judge selection process, although that was run by the deputy attorney general, and I was involved in the U.S. attorneys and U.S. marshals. But I watched all of it, and I appointed 100 judges myself. And it’s something I thought of, when I was the Mayor, as one of the most important things that I did.

HH: Did you have a litmus test for those hundred?

HH: A pro-life voter looking at you, knowing that you’re pro-choice, but not concerned that presidents really matter so much in that, except as far as judges are concerned, what do you tell them about who you’re going to be putting on the federal bench?

RG: I’m going to say I’d put people like…I mean, the best way to do it is to just say I would, I could just have easily have appointed Sam Alito or Chief Justice Roberts as President Bush did, in fact. I’d have been pretty proud of myself if I had been smart enough to make that choice if I were the president.

HH: Do you expect justices like Roberts and Alito to come out of a Giuliani administration?

RG: I hope. I mean, that would be my goal. I mean, they’re sort of a very high standard, and so is Justices Scalia and Thomas. That would be the kind of judges I would look for, both in terms of their background and their integrity, but also the intellectual honesty with which they interpret the law.

HH: Now you know, the first President Bush got this big head fake with Justice Souter. Do you think you can get fooled the same way that he did on that one?

RG: All of us make mistakes. I mean, your goal and your intent would be not to, but I learned a long time ago that you’re never 100% correct in the decisions you make, and I think that that…and with judges, that’s even more difficult, because they change their minds. But I was very aware of that when I was appointing judges to the criminal court in New York. And my goal there was more the criminal justice issues. You know, were they going to be tougher on crime, basically. Were they going to interpret some of the massive grants and rights that were given to criminals with an eye toward protecting the victims and protecting society. And I think I did a pretty good job of that. I can’t say I was 100%, but I think I did a pretty darn good job of that.

The Politico report challenges the mayor’s assessment of his own skills in picking judges. So now the question becomes urgent: Whom would a President Giuliani nominate to the United States Supreme Court?

Look for Governor Romney and the other Republicans to focus on judges again and again in the weeks ahead. Social conservatives know that in electing a president they must first have a leader the equal of George W. Bush in commitment to victory and toughness in the face of political opponents committed to defeat, but they also demand seriousness about the courts.