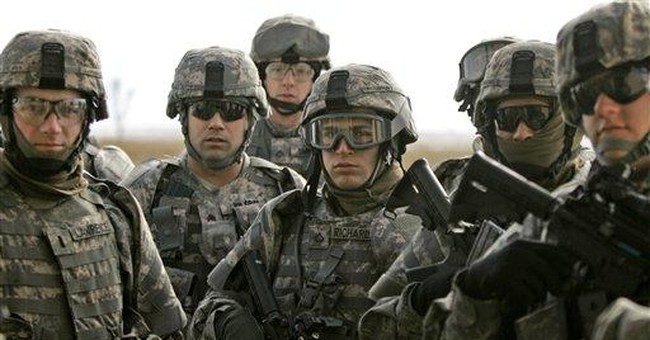 The president gave the Library Room speech on January 10. Tony Snow had briefed some bloggers before the speech, and made a few appearances on talk radio afterwards (including on my program.) The Vice President appeared on Fox News Sunday four days later, and the National Security Advisor made the rounds of the other shows. Senator McCain, Governor Romney and Mayor Giuliani –the big three of the GOP presidential campaign—all endorsed the plan. The president appeared on 60 Minutes.

And that was it.

It never stood a chance.

First, business-as-usual dictated that the White House released all the crucial details before the speech, thus draining the address of audience and drama. Ratings were in the tank as a result, as one would expect from the closest thing to a rerun the political world sees. I asked Snow why the rush to gut the audience, and he explained how this allows the White House to get inside the MSM’s news cycle and thus positively affect the coverage.

Tony no doubt believes this. It is nonsense, though, and the new news cycle doesn’t care what the morning papers say or don’t say. Americans respond to first person appeals, not the laundered spin of the MSM –an impact that is not merely blunted but wholly destroyed by the promiscuous peddling of talking points prior to launch. If the president is going to have a chance of persuading the public, the public has to actually watch him. They didn't. He didn't. It isn't that complicated.

When I suggested that Steve Jobs built audience and interest by holding all details about the iPhone in the deep freezer, Tony responded that the war in Iraq isn’t the iPhone –completely true, of course, and completely beside the point. Creating audience and gaining credibility with it, whether the financial and electronics press, or the American public, always begins with the audience’s attention.

Want to kill all of the State of the Union’s impact? Tell everyone what is in it.

Want to build audience? Tell no one. Don’t even give a copy to the Speaker. Make her listen and react, and all the Congresspeople as well.

That’s point one. Now to the "follow up" that wasn’t.

Explaining why it is necessary to “surge” and why the sacrifice of American lives is not just noble, but necessary, requires a daily engagement by the Administration’s best communicators, and across the entire media spectrum. The center-right doesn’t much care what is said on Russert’s Sunday coffee clatch, and there is a good argument that independents don’t either. There is no mass audience anywhere, and no single appearance on a single show will do. The key message –the war can be lost in Iraq, with slaughter on a scale approaching Rwanda and immediate effects on American security—is not getting through or not being believed. Part of the problem is that in a shattered media environment, the Administration and the Pentagon, as well as GOP leadership on the Hill, are not making the case day-in-and-day-out. “Making the case” doesn’t mean the Sunday shows, by the way, or an op-ed here or there.

It means the Today Show, the O’Reilly Factor, Lou Dobbs and Jay Leno.

It means the Weekly Standard and the New Republic, and every paper’s D.C. bureau chief.

And it means, most definitely, the blogs, and not just on conference calls that allow the list to get checked off all at once.

And it means the entire Cabinet, and the deputies, and the White House staff. Ask yourself how many of these men and women you have seen or heard discussing the war in the days since the president's speech. Where's the sales force? And that is what it is, just as Reid-Pelosi-Clinton-Obama constitutes a sales force. Only difference: They are out-selling --out-persuading-- the Administration's team. By a lot.

I asked then-Secretary Rumsfeld on May 9 of last year about the information war we are in, and whether anyone at the Pentagon really understood it and was waging it. His response:

I don't know how to answer that. First of all, the truth is, and it's embarrassing to confess this, that I suppose I work about 13 hours a day. And I'll bet you that 12 1/2, or 12 3/4 of those 13 hours a day, I spend doing things instead of thinking about how I communicate, and what the message ought to be, and fighting the enemy on their level, against their media committees, and their active efforts at disinformation. And I probably ought to spend, and we here in the Department, ought to spend more time thinking about those messages, and how we can counteract the lies, because they are enormously successful. They can put out a lie, and then we're asked the question is that true. And we can know we think it's not true, but we have to be honest, and we have to be accurate. So we then have to spend two or three days trying to find out what the truth is, before we can rebut the lie. Well, the lie's been around the world 15 times by the time we even get our boots on.

In other words, "No. Nobody's in charge."

I think the Administration is in a similar bind today vis-à-vis the American public –so harried by the press of the Beltway press that the communications team has lost sight of the fact that they cannot win with old media, period. They need to focus on new media with audiences open to the message.

In the last election the GOP base stayed loyal to the president and the GOP. One major reason for that loyalty has to be that these voters get their information –detailed, reliable, persuasive information—from sources willing to argue the case for victory, and who do so day in and day out. Whether that is Rush or Sean Hannity, Powerline or the Weekly Standard, Fred Barnes, Morton Kondracke or Charles Krauthammer on Special Report in response to serious questions from Brit Hume, or a dozen columnists at Townhall.com, the audience that is listening or reading closely is supporting the idea of victory in Iraq (even as they separate from the Administration on other issues.) Repetition matters, as does the appeal through non-traditional channels.

The Bush/Cheney political staff knew the importance of these channels in 2004, and used them to reach not just the base but the center paid off in persuaded voters.

In 2006, the base stayed tuned in, and turned out, but the center did not hold or stayed home. The left had co-opted the various message senders, and the result was a loss of control of the Congress.

Now the whole war effort is being undermined by a replay of the elite media/anti-war campaign which condemned Southeast Asia to a holocaust, and the White House is flat-footed. Even the most able press secretary in a generation cannot be everywhere. Snow needs every Administration official to be part of the effort to persuade the country, and not just to show up, but to be smart on the details and the threat. When cabinet officials make appearances, they cannot be tired of their own points. Worn down or out? Then quit. Still committed to the idea that the Administration is engaged in defending the country? Then get the details right and communicate them.

Why do nine brigades matter?

What are the consequences of retreat?

I watched today as Secretary of State used a prime media opportunity to dispatch Michelle Kwan with Undersecretary Hughes on a goodwill mission to China. Fine. Wonderful stuff. I really do appreciate Ms. Kwan’s willingness to help.

But this is not serious, and it may even be defeating the delivery of the crucial messages intended to persuade not just Americans but the world about the stakes.

If, as the president has argued, and as I believe, the war –in Iraq, in Afghanistan, in Somalia and across the globe—is the central calling of our time, then the men and women in charge of winning it need to embrace the very difficult task of persuading a public bombarded every day with a contrary argument.

Every day. In many places. With passion.

One final question: Does the United States, more than five years into the war, operate an internet site where the president’s speeches and the other crucial arguments about the war by commentators who genuinely understand the stakes are translated on an immediate basis into Arabic and Farsi? If not, why not?

If the American public’s opinion matters, how much more the opinions of those in the Muslim world we seek to engage on our side?

You cannot win an information war unless you engage in it. And we are not engaged.

Leftists Are About to Kill Millions of People Right Before Our Eyes
Townhall
Blue-check gun-grabbing DBAG's attempt to backpedal after praying for Republicans to catch cancer, suffer, die, and BURN IN HELL backfires
Twitchy
Witnesses: Police Refused to Enter School as Uvalde Shooter Rampaged, Subdued Parents Begging Them to Act
Redstate
Mass Shooting Facts to Shut Down Your Liberal Sister and Her Annoying, Man-Bunned, Non-Binary 'Boy' Friend at Your Memorial Day BBQ
PJ Media