The Problem Isn't Muqtada Sadr (or Nasrallah), but Ahmadinejad and Khamenei 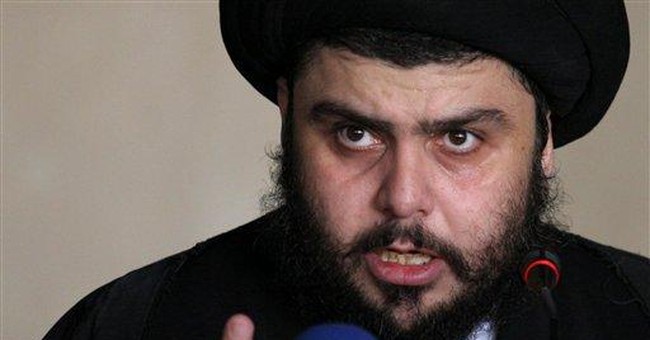 The Pentagon's most recent report on the conditions in Iraq has a lot of good news and a lot of bad news. As is typical, the report was cherry-picked by the mainstream media (MSM) to emphasize the worst developments from early August through early November, and only the briefest of mentions referred to progress made there by Coalition forces.

The report deserves to be read closely because it is very comprehensive and quite candid about the front in the global war that is Iraq. Here are the key graphs:

"More than 45,000 additional Iraqi soldiers and police have completed initial training and equipping since August 2006, bringing the total number of ISF (Iraq security forces) that have been trained and equipped to 322,600. By the end of December 2006, the United States and its Coalition partners will have met the force generation targets while continuing the efforts to improve the ISF's capability to meet emergent requirements. However, the trained-and-equipped number should not be confused with present-for-duty strength. The number of present-for-duty soldiers and police is much lower, due to scheduled leave, absence without leave, and attrition.

"The ISF increasingly took operational lead, assuming primary area security responsibility and demonstrating an increased capability to plan and execute counter-insurgency operations. As of November 13, 2006, there were 6 Division Headquarters, 30 Brigade Headquarters, and 91 Iraqi Army battalions that have been assigned their own areas for leading counter-insurgency operations. In September 2006, Multi-National Corps-Iraq (MNC-I) transferred command and control of the Iraqi Ground Forces Command (IGFC) to the Ministry of Defense Joint Headquarters. Joint Headquarters also assumed command and control of the Iraqi Air Force and Navy, and IGFC assumed command and control of two Iraqi Army divisions (4th and 8th). In total, 104 Iraqi Army combat battalions, 2 Special Operations Battalions, and 6 Strategic Infrastructure Battalions are now conducting operations at varying levels of assessed capability."

The report did identify Muqtada al Sadr's cadres as the greatest threats to the near-term stability of Iraq:

"The group that is currently having the greatest negative affect on the security situation in Iraq is Jaysh al-Mahdi (JAM), which has replaced al-Qaeda in Iraq as the most dangerous accelerant of potentially self-sustaining sectarian violence in Iraq. JAM exerts significant influence in Baghdad and the southern provinces of Iraq and on the Government of Iraq. JAM receives logistical support from abroad, and most, but not all, elements of the organization take direction from Muqtada al-Sadr. JAM and Badr Organization (see below) members periodically attack one another and are political rivals.

"The Badr Organization was one of the recognized militia under the Coalition Provisional Authority Order 91. Although it participates in the Government of Iraq, Badr's members attack Sunni targets and compete with JAM for power and influence among the Shi'a. Badr receives financial and materiel support from abroad."

The report goes on to detail the crucial fact about Iraq: Long-term stability cannot be achieved until and unless Iran and Syria are deterred from their support for instability:

"Iran and Syria continue to influence security negatively in Iraq. The Iranian government sees an unprecedented opportunity to bring Iraq into its sphere of influence and to prevent it from re-emerging as a threat to Iranian interests. Tehran also views the situation in Iraq through the prism of Iran's ongoing tension with the United States and the West -- especially the continued presence of U.S. forces in Iraq, Afghanistan, and the Persian Gulf, which threatens to constrain Iran's regional ambitions. Iran seeks to ensure that the Coalition bears political, economic, and human casualty costs to deter future U.S. regional intervention. To achieve these objectives, Iran continues to pursue a dual-track strategy of supporting Shi'a unity and a stable government in Iraq -- either a functioning, unified Shi'a-dominated central government or a federated state -- on one hand, while facilitating militia activities in Iraq on the other. Iran has developed links to southern Iraq and the Kurdish region to facilitate access and perhaps to safeguard its interests in case Iraq were to split into a collection of sectarian enclaves.

"Despite repeated warnings by the United States, the Syrian regime continues to provide safe haven, border transit, and limited logistical support to Iraqi insurgents, especially elements associated with the former Iraqi Ba'ath Party. The Syrians also permit former regime elements to engage in organizational activities, such that Syria has emerged as an important organizational and coordination hub for elements of the former Iraqi regime. Syria has taken a relatively pragmatic approach in dealing with Islamic extremist groups, such as al-Qaeda in Iraq and foreign fighters; although it has detained and deported many foreign fighters, Syria has allowed others to transit to Iraq."

There, in three excerpts, is the situation in Iraq: a growing Iraqi military of increasing competency but still with significant gaps; radical militias that attack each other, Sunnis, and the Iraqi military and coalition forces; and two neighbors supplying crucial support to the enemies of the government.

Al Qaeda remains a threat in Iraq as it does in Afghanistan and increasingly in Somalia. But by far, the biggest problem for Iraq -- in the region as a whole and indeed the world -- is the increasing recklessness of the government of Iran. Headlines about Sadr are really headlines about Iran's leaders Ahmadinejad and Khamenei, just as headlines about Hezbollah are headlines about Iran's designs in Lebanon. A revolutionary regime is busy attempting to install its surrogates in nearby states, just as the Soviet Union did after the collapse of Germany.

The attempt by Stalin to install his proxies in Greece led to a bloody and prolonged civil war in that country, but Truman had the will to refuse Stalin that victory. The same attempt was made in Korea and throughout Africa and Asia. Because first Truman, and then Ike and subsequent American presidents usually refused to fold, the ambitions of Stalin and his successors were stalled.

When Jimmy Carter cleared the way for a new revolutionary regime to take up residence in a crucial region of the world, a blunder of unimaginable consequences occurred before our eyes. Sadr is no more the crucial problem in Iraq than Nikos Beloyannis was in post-war Greece.

To win in Iraq, the government of Iran needs to be restrained and ultimately replaced with a genuinely democratic one. Unless and until the radicals of Tehran are removed, there will not be "stability" in any meaningful sense of the word, only at best pauses between gambits.