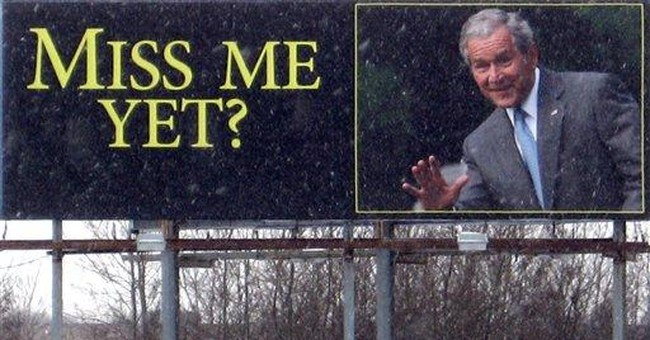 As America loudly repudiates the leftist agenda of President Barack Obama and his Congressional allies, a group of partisan GOP opportunists is busy promoting a theory of “Republican revisionism.”

What does this theory hold?

Namely, that the GOP wasn’t “all that bad” – and certainly not as bad as the socialist hordes who have ostensibly pushed America to the brink of financial ruin over the last year. In advancing this theory, the GOP is looking to recast itself as a party that can be trusted with your tax dollars – while simultaneously attempting to reframe the legacy of the President (and dozens of other GOP politicians) who couldn’t be trusted with your tax dollars.

This effort is most clearly visible in the GOP’s recent attempts to co-opt the Tea Party movement. It can also be seen within the opportunistic machinations of former House Speaker Newt Gingrich, who has been pushing a new “Contract with America” in spite of his obvious betrayal – and subsequent scuttling – of the original movement fifteen years ago.

The GOP’s new revisionist message was summed up in a billboard that appeared recently on Interstate 35 in Wyoming.

“Miss me yet?” a smiling picture of former President Bush asks passing motorists.

What this theory of “Republican revisionism” lacks is even a tangential basis in fact. That’s because Republicans – at least prior to the election of a Democratic Congress in 2006 and a Democratic President in 2008 – were engaged in precisely the same policies they now spend all of their time railing against.

Honestly – why do you think they were booted out of power in the first place?

Republicans are no strangers to massive government overreaching.

For example, President Bush responded to the September 11 terrorist attacks by creating a huge new government bureaucracy, implementing an Orwellian domestic wiretapping capability and engaging our military in two costly foreign wars with no defined objectives and no exit strategy.

Meanwhile, he supported the unconstitutional suppression of free speech by signing so-called “campaign finance” reform, dramatically stifling the ability of the public to criticize incumbent politicians. Fortunately, the Supreme Court has since overturned several of McCain-Feingold’s most anti-First Amendment provisions.

Bush and his cronies loved pork barrel spending, too. In 2005 – over the strenuous objections of taxpayer advocates – he signed a massive $286 billion transportation bill that included 6,371 pet projects inserted by Republican and Democratic lawmakers. The bill was a pork-fest that dwarfed previous Democratic transportation boondoggles.

Why did a Republican President sign such a monstrosity?

“The president has to work with the Congress,” a Bush spokesman said at the time.

In case anyone forgot, Republicans controlled both the U.S. House and Senate in 2005.

Bush and his GOP allies also fought to create new entitlement spending – including a prescription drug benefit to Medicaid that has cost taxpayers hundreds of billions of dollars. They federalized education with No Child Left Behind, although erasing the “soft bigotry of low expectations” has done nothing to bridge America’s achievement and innovation gap with the rest of the world.

Perhaps most revealing, for the vast majority of his administration, the “conservative” Bush kept his veto pen in his pocket – refusing to wield the one potent weapon (other than the bully pulpit) that could have been employed on behalf of American taxpayers.

As a result of Bush’s fiscal recklessness, budget surpluses turned into deficits and a $5.7 trillion national debt soared to $10 trillion. Also, Republicans are quick to forget that Bush is on the hook for a considerable portion of the unsustainable spending that is currently driving our debt even further into the stratosphere.

Indeed, Bush cemented his anti-free market legacy in late 2008 with the passage of the Troubled Asset Relief Program (TARP) and tens of billions of dollars worth of automotive bailouts – additional examples of his kneejerk tendency to resolve every crisis faced by the nation with an unprecedented expansion of government power and taxpayer debt.

Was Bush a better steward of your tax dollars than Obama?

Yes – but that’s the problem. Getting mugged worse the second time around doesn’t absolve the first thief of his culpability.

The simple, unavoidable truth is that Bush and his GOP allies were fiscal liberals, and no amount of “Republican revisionism” can erase that fact.