Obamacare: How the Unions are "Getting Well" 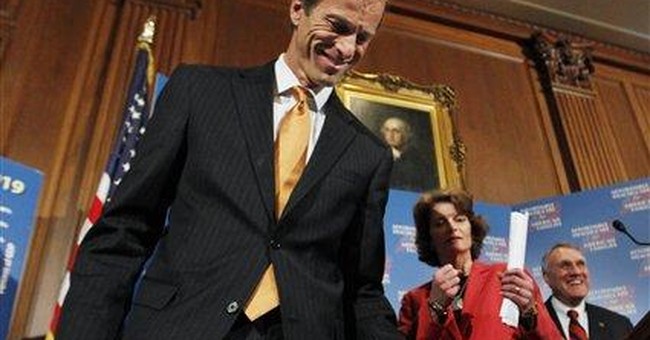 It’s already being called the “Second Louisiana Purchase,” but the sad truth is that a controversial payoff to U.S. Sen. Mary Landrieu’s home state of Louisiana is among the smallest of the thinly-disguised bribes and kickbacks that are being offered in Washington D.C. to secure passage of President Barack Obama’s socialized medicine proposal.

In fact, at “only” $300 million, this disgustingly transparent (and yet transparently successful) effort by Democratic Majority Leader Harry Reid to “negotiate” for Landrieu’s support on a key health care vote doesn’t hold a candle to the real graft that’s going on in our nation’s capital.

For example, you’d have to multiply that dollar amount dozens of times over to arrive at the $10 billion in so-called “reinsurance” money that has been tucked away for organized labor in the $2.6 trillion House bill.

What’s that “reinsurance” money for, exactly?

That’s simple - it’s a bailout for union leaders who have grossly “mismanaged” funds that were supposed to pay for their retirees’ insurance claims.

Of course in a bitterly ironic pill for taxpayers to swallow, at the same time Obama is hoping to shower money on these labor leaders for their ongoing corruption and incompetence, he has removed any accountability whatsoever over their future actions by rescinding Bush-era disclosure requirements on top union officials.

And you thought Capone’s Chicago was corrupt? Apparently it’s got nothing on Obama’s Washington, D.C.

Amazingly, though, both versions of Obamacare do something far worse than slipping billions of dollars into the pockets of organized labor leaders as a payoff for their support in the 2008 election: They actively seek the forced unionization of the entire health care industry.

In the $2.5 trillion Senate proposal, for example, a union-stacked “personal care attendants workforce advisory panel” would be established under the Department of Health and Human Services (DHHS). This panel would have the authority to compel union affiliation – and payment of union dues – in exchange for allowing “private” providers access to federal reimbursements for community care.

Similarly, the House proposal gives sweeping regulatory authority – including the approval of compulsory union dues – to DHHS in its role as the provider of public plans.

“The House resolution establishes a scenario that would effectively exclude non-union employers from eligibility to work on program-funded contracts,” a recent opinion-editorial published in the Houston Chronicle noted. “It also requires participating health care providers to pay wages and benefits that have been collectively bargained or that union-friendly appointees determine are competitive.”1

The scam works like this: In order to become eligible for federal reimbursements, employees who provide home care must agree to be “reclassified” as federal employees, with the strings of compulsory union membership and dues attached, of course.

Pioneered by former California Gov. Gray Davis and disgraced Illinois Gov. Rod Blagojevich – both of whom also owed huge campaign debts to organized labor – this scam lies at the heart of both the House and Senate versions of Obamacare. In fact, it is being pushed most aggressively by the Service Employees International Union (SEIU), which like the rest of these declining organized labor behemoths is desperate for new dues-paying members.

This scam is also why Obama and the leadership of both the House and Senate refuse to consider passing a bill that doesn’t include a so-called “public option.”

Obama and Congressional leaders know that compulsory union membership – established within the framework of a government-administered health care system – is vital to organized labor’s long-term survival.

Bailout billions from the government may come and go, but the effective nationalization of hundreds of thousands of doctors, nurses and home care providers would provide the unions with a steady stream of billions of dollars in annual revenue for years to come.

That’s the “purchase” we should be keeping our eyes on as the health care debate moves forward.