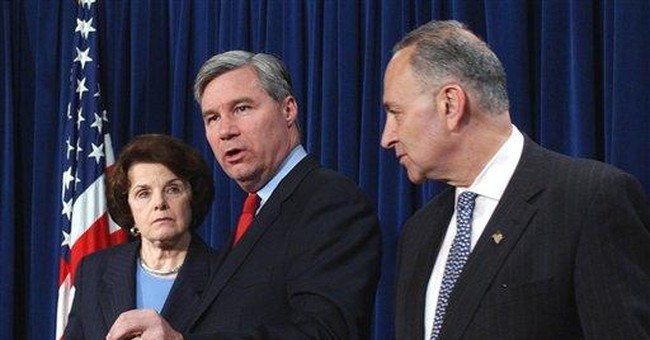 Late last month the Center for the American Progress released a report entitled “the Structural Imbalance of Talk Radio.” The study purportedly provides a seriously analysis of the partisan programming that exists on talk radio and concludes that it is overwhelming right of center. Notwithstanding the pseudo-scientific nature of this report, it’s clearly more pseudo than science.

To start with the study rests on an amazingly loose definition of what constitutes left and what constitutes right leaning programming. It doesn’t include any of the programming broadcast nationwide by National Public Radio and then places in the category of right leaning programming almost any format that doesn’t embrace a hard left agenda. As a result – stations in LA, NYC and San Francisco were listed as having little to no “progressive” formats. Tellingly the study acknowledges that “only hosts with evident and near- indisputable leanings were categorized.” This resulted in almost all programming not promoting Che Gueverra being categorized as “right of center.”

But the flaws don’t stop there. Although this study fails to accurately identify programming – it is indisputable that talk radio skews right – it’s greatest failing is its implication that the skew itself is an issue which needs a legislative solution. Moreover, this study’s recommendations reject two fundamentals of the American system – free speech and free markets.

It is axiomatic that under the First Amendment the federal government should not make assessments of the political content of talk radio or of any news program and they clearly shouldn’t link keeping your license to those assessments. Setting aside questions about indecency, obscenity or hate speech, the type of programming criticized in the CAP study is exactly the type of activity that the First Amendment exists to protect.

In the view of CAP, the federal government should legitimately be concerned because “too much time” is being spent discussing tax relief, school prayer, or gun owner rights? As an aside, on the same day that the CAP report was issued, MSNBC released a news story covering the political contributions of the mainstream media It was no surprise that the news report indicated that editors, producers and news anchor lean to the left and give accordingly – almost 9 to 1 according to the report. And frankly it was actually quite refreshing to see representatives of the liberal media put up their own money to back the leftwing causes the advocate for a change. The irony is that notwithstanding this overwhelming bias in political contributions, no centrists or people on the right advocated legislation to restrict the political contributions of the news media. Americans recognized that our Bill of Rights explicitly provides a wide zone of freedom for this type of conduct even if it is overwhelmingly biased to the left.

On the other hand, the CAP study not only identifies the talk radio programming which discusses current events and public policy disputes from a conservative perspective as a problem, it then goes forward and offers solutions that are even more troubling.

What kind of solutions? First it conceives of the rehabilitation or creation of so called citizen councils which would operate apparently in lieu of arbitron ratings. These citizen groups would assess the usefulness and benefits of a given talk radio broadcasters programming to the locality. We’re not told how these individuals would be selected and fundamentally we’re given no explanation for why they are even needed. In the free market, a radio broadcaster has every incentive to make sure that the programming that is provided is welcomed because if he fails to do so, he’ll be out of business. Unfortunately in a bow to a government regulatory scheme more consistent with Hugo Chavez than the free market, the Center for the American Progress rejects viewer and listener decision-makers as the drivers of radio programming.

Secondly the study recommends issuing assessments – also known as fines – to radio station owners that fail to provide “balanced programming.” And interestingly, they recommend handing this bounty over to National Public Radio – the very same programming entity that the study itself doesn’t even acknowledge exists. Again if the study’s own definition of what constitutes right and left programming is any indication of how these fines will be assessed, NPR is in for a huge windfall.

Finally the study determined that since women and minorities were more likely to support Democrats and “progressive” politics, women and minorities should have greater ownership of radio stations. But since the stations in question already have owners, CAP would use the pretext of corporation ownership concentration as a rationale for divestiture. How the government would go about determining which women and minority owners would provide the “balance” the CAP is seeking is unknowable, but it clearly would be lucrative for the lucky few who are likely to resell their licenses the same way they did in the late 70’s and 80’s – the last time this minority ownership scheme was tried. So other than a wealth transfer, it’s not clear how this policy would meet their stated goals.

Ironically, the study fails to acknowledge the overwhelming hostility among radio audiences to the hard left programming format that they advocate. The abysmal collapse of Air America is a case study in the futility of the so-called “progressive” format. With all of the financial support, publicity and promotion given this network, its staggering failure nationwide is clear evidence that there is neither need nor interest in this type of programming.