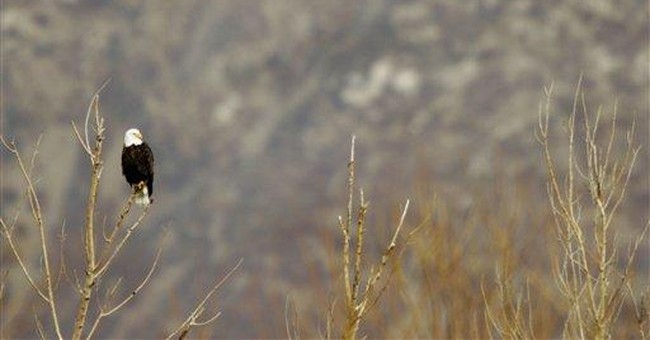 Spring is a refreshing time of the year when most of us know how to enjoy the beauty of Mother Nature and her splendor. It is also a good time to remind people of the beauty of this great nation, the United States of America, despite those who work so hard to paint America as ugly.

Let's look at some of the things the ugly crowd chooses to forget. We have not had a terrorist attack on our soil since September 11, 2001. The growth in the national economy has been vibrant for the last four years and continues strong. The unemployment rate is at a multi-decade low for all those who want to work.

Even though the price of gasoline has skyrocketed in the last several years due to the laws of supply and demand, most of us are still planning to take our summer vacations with our kids and grandchildren. And since home ownership in the United States of America has reached a record high of over 70 percent, some of us might have to cut our own lawns.

And despite all the conflicts in which we are engaged around the world to help other nations, and despite the politicization of the lives of those who serve in our all-volunteer military, those men and women are still valiantly protecting us and some have even given their lives.

Although we all have the right to vote for our elected officials, only about 50 percent of us usually find the time to exercise our responsibility to vote. Our liberties are fading due to an abusive tax code, out-of-control federal government spending, runaway social programs and more political promises of even more indeterminable government programs. Yet, this is still the "sweet land of liberty."

The politically incorrect police want to take God out of our vocabulary, out of our public institutions and off of our currency. They have totally misinterpreted the First Amendment of the Constitution. Yet, they are the first to cry "Lord help us" in the midst of a national disaster.

Many celebrities and those with access to the influential mainstream media have abused the freedom of speech with deception, lies and personal agendas. But it is the beauty of America that has provided them the opportunity to become rich enough to talk trash against America the Beautiful.

But beware! "Big Brother" is working hard to minimize even more of our freedoms. Government has minimized our freedoms by dictating how and how much we pay in taxes. It has minimized our ability to work toward energy independence because of too much regulation. It has limited the ability of U.S. businesses to compete in the global marketplace because of too much taxation and regulation.

But we can still drive from sea to shining sea without having to go through Checkpoint Charlie. And we can still buy groceries 24 hours a day to fill those refrigerators and freezers that are already full. We can still talk to our grandchildren about a future uncertain, because it is still a future of hope.

It's about leadership. The United States of America is beautiful and great because of its historical leadership during its most challenging times. We now face similar challenges with national security, keeping the economy strong, replacing the tax code, restructuring Social Security and Medicare and reducing our dependence on foreign oil.

America the Beautiful is also about the will of the people. The ugly reality is that some elected officials have hijacked the will of the American people with deception, lies, unrealistic promises and a total lack of leadership.

Sometimes it takes a long time for people to figure out who's telling the truth, and who the real leaders are, because of so much information and misinformation. But eventually, enough people will figure it out. And even though we will never be able to completely silence the ugly crowd with reality, they will eventually become a mere whisper.