April's Fools: One Born Every Minute 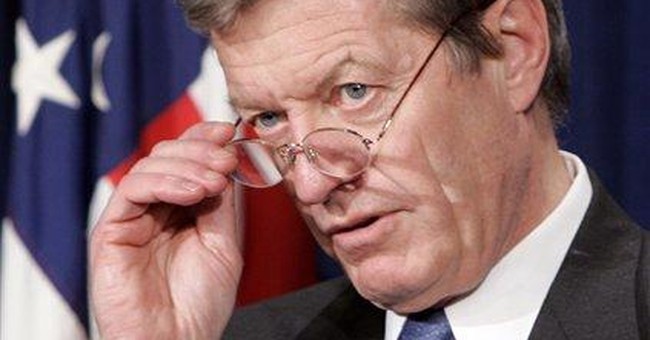 An old and popular English proverb cautions us that a fool and his money are soon parted. Senate Finance Committee Chairman Max Baucus (D-MT) is taking us all for fools with some of his recent statements and votes.

On January 4, 2007, Senator Baucus spoke on the Senate floor about the imperative need to repeal the Alternative Minimum Tax (AMT). The AMT was enacted in 1969 to make sure that a handful of millionaires could not take advantage of completely legal tax deductions and shelters. Because Congress did not index the AMT's income levels to inflation, millions of families earning just over $60,000 today are getting hit with larger tax bills just for playing by the rules.

Sen. Baucus stated, "I am pleased to join with my friend Chuck Grassley, and our fellow Committee colleagues, Senators Schumer, Kyl and Crapo to introduce legislation today that will repeal the individual AMT. Our bill simply says that beginning January 1, 2007, individuals will owe zero dollars under the AMT." Baucus added, "It is truly bizarre that we've designed a tax that deems more children 'excessive deductions' and punishes duly paying your state taxes."

You read that correctly. The Democratic chairman of the Senate's chief tax writing committee said he wants to completely eliminate one of the cruelest components in the income tax code. Maybe we are making progress. Baucus even sponsored a bill, S 55: "A bill to amend the Internal Revenue Code of 1986 to repeal the individual Alternative Minimum Tax." Five Republican and two Democratic Senators joined him as co-sponsors. One of them, Charles Grassley (R-IA), ranking minority member of the Senate Finance Committee, recently offered Baucus and his Democratic colleagues a chance to make good on their promise.

On March 23, Grassley sponsored an amendment to the Senate's 2008 budget bill that read, "To amend the budget resolution for fiscal year 2008 in order to accommodate the full repeal of the Alternative Minimum Tax preventing 23 million families and individuals from being subject to the AMT in 2007, and millions of families and individuals in subsequent years." Seems fairly straightforward doesn't it? With the previous statement by Baucus and support of liberals like Chuck Schumer (D-NY), this amendment probably sailed right through with nary a dissenting vote.

Except that it didn't. The vote wasn't even close. A bipartisan coalition of Senate liberals, including Baucus, Schumer and Republicans Olympia Snowe (R-ME) and Judd Gregg (R-NH), defeated the Grassley amendment by a vote of 53-44. As hard as this may be to believe, Senator Baucus lied on the floor of the Senate, and he lied to the American people with his vote on the Grassley amendment. We were all fools to believe him, and we and more of our money will soon be parted.

Worse, the congressional majority has no intention this year of cutting one sentence from the 9 million-word income tax code. In fact, they plan to wring even more tax dollars from the pockets of American families by unleashing the IRS dogs on us.

Congressman John Lewis (D-GA), chairman of the House Ways and Means Oversight Subcommittee, said at a March 20 hearing, "For some time, I think the IRS has been underfunded. They have a major task…and we need the revenues to fund the things we want to do."

Consider Lewis' statement in context of the liberal majority's overall agenda. Their agenda and accompanying rhetoric include nothing about increasing economic freedom and protecting the homeland from Islamic terrorists. Instead, they want to manipulate the tax code to shake down law-abiding Americans for every last penny. They want U.S. troops to fail in their missions across the globe. That's all.

Have you heard one mention of restructuring or reforming Social Security and Medicare or ensuring the continued economic prosperity the majority of Americans currently enjoy? You have not and you will not. The liberal mission is just the opposite, as judged by their words and their votes. It is not an exaggeration to argue that they only want to raise taxes, lose the war and distract the White House with never ending investigations.

If all the liberals wanted from us was more taxpayer money to spend on pork projects and entitlement programs, history shows that the best way to raise federal revenue is to cut or eliminate the taxes we pay. Surely there are some smart liberals in Congress who know that federal coffers swell when tax rates are lowered. But the liberals are not interested in just taking our money.

They want to mug us first and then break our kneecaps for good measure. The problem is that these pirates of Pennsylvania Avenue want both our money and our economic freedom. Their political ideology cannot survive in power for the long term if the American people have resources to challenge their tyrannical grip on our lives.

Some of us devote a lot of time pointing out the lies and deception, and explaining the foolishness of liberal policies. But too many people don't get it or even want to get it, and that's just fine with the leaders of liberal destruction.

That way, there are more April fools all year long.

Biden Reminds Gun Owners the Government Has Nuclear Weapons
Townhall
What the actual EFF is THIS? This CAN'T be real: Mom trashes 5-year-old daughter and preteen son in rant about 'white girl tears' (watch)
Twitchy
Biden Threatens to Nuke Americans but Manages to Blow Up a Big Democrat Narrative Instead
Redstate
The Morning Briefing: We Can't Let the Psycho Marxist Democrats Win the Critical Race Theory Fight
PJ Media