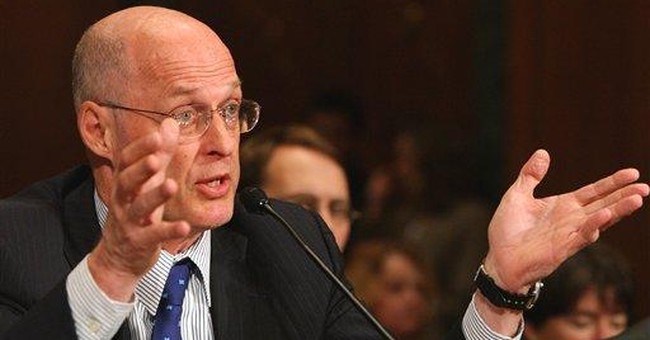 Last week I discussed the testimony delivered February 8 by Treasury Secretary Henry Paulson before the Senate Budget Committee on President Bush's fiscal year 2008 budget proposals. When asked by Budget Committee Chairman Kent Conrad (D-ND) about proposals to reform entitlement programs, Paulson said, “Let's take the politics out of this . . . without prejudging outcomes, without trying to negotiate this in a public arena.” Senator Conrad responded, “I think that is a very constructive statement.”

This smacks at an attempt to negotiate solutions to the nation’s most imminent fiscal crisis – federal entitlement spending – in the backrooms of the Capitol, out of view of the public and the media. It also smacks at pandering to the Democrats in Congress who have no desire to restructure entitlement programs.

Now Federal Reserve Board Chairman Ben Bernanke is pandering to the Democrats on tax policy and class warfare. Considering Mr. Bernanke’s credentials and professional history, I was surprised by his remarks.

On February 14, Bernanke delivered his Semiannual Monetary Policy Report before the Senate Banking, Housing and Urban Affairs Committee. According to a Washington Times report of the hearing, “Bernanke urged action...to balance the budget and curb income inequality through better education, saying such goals should take priority over tax cuts.”

In response to a loaded question from Senator Bob Casey (D-PA) on whether Congress should extend tax cuts or increase Head Start funding, Bernanke replied, “I can’t speak to the overall combination of taxes and spending, other than to say that they should be in balance.”

First, the Head Start program received $6.8 billion in the fiscal year 2007 continuing resolution, or less than half of 1 percent of the president’s $2.9 trillion 2008 budget proposal. The 2003 rate cuts on capital gains taxes alone produced $110 billion in federal revenues in 2006. Most Head Start teachers could tell you that the capital gains rate cuts produced enough tax revenue to increase the Head Start budget 16 times over.

Second, addressing the tradeoff between taxation and spending is easy, Mr. Bernanke. If Congress cuts the growth in federal spending and maintains low tax rates, the surge in revenues from low tax rates will balance the budget. The problem is that Congress has never found an excess tax dollar that it could not spend. We have a spending problem, not a tax problem.

Regarding Mr. Bernanke’s comments on the income gap, the Times reported: “Mr. Bernanke said taxes have an ‘important’ role to play in narrowing the widening income gap between rich and poor through income-transfer programs . . . ”

Bernanke’s statements on the so-called income gap between undefined groups of rich and poor Americans echo President Bush’s January 31 remarks on Wall Street that “income inequality is real; it’s been rising for more than 25 years. The reason is clear. We have an economy that increasingly rewards education and skills because of that education.”

The president and his hand-selected Fed chairman seem oblivious to the underlying principles of our free market economic system. Did Bush and Bernanke suddenly forget the litany of economic metrics that have risen since the 2003 tax rate cuts became law? They are arguably more concerned with scoring political points with the Democratic-controlled Congress. As the Times report went on to state, “Mr. Bernanke's remarks . . . were received warmly by Democrats.”

In other words, Mr. Bernanke pandered to the Democrats’ desire to not make the 2003 tax cuts permanent, increase spending on entitlement and discretionary programs, and meddle with the dynamics of our successful free market economic system.

Democrats in Congress will spend the next 21 months before the 2008 presidential election criticizing phantom inequities in the economy, and singing a never-ending chorus of class warfare rhetoric. Republicans have two choices.

They can remain quiet and avoid the inevitable media characterization of favoring the wealthiest among us. Or they can go on the offensive and boldly explain how low tax rates on income and investment create jobs and increase personal wealth for all American families who participate in the economy.

The administration and Republicans in Congress will either defend their convictions and the principles that have created the greatest economy in the world, or relegate themselves to a permanent minority.