Control Does Not Fill the Leadership Void 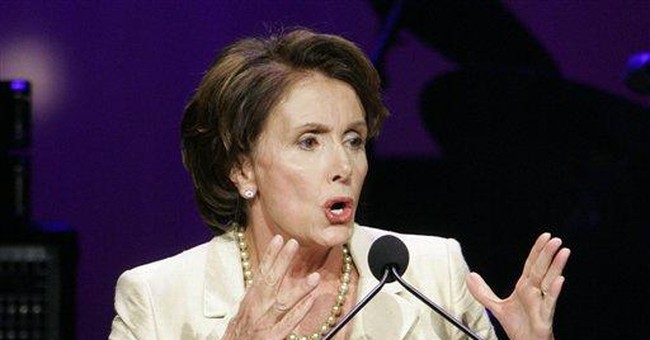 Democrats are celebrating their new majority status in Congress with lots of speeches about bipartisan cooperation and a less-than-inspiring agenda for their first 100 legislative hours. Time will tell if they keep their word on working with Republicans, but the voters want leadership on the big issues, not platitudes about comity and meaningless political victories.

Under the leadership of then-Speaker Newt Gingrich, House Republicans in 1994 made progress on significant issues through the Contract with America. But under the last six years of Republican control, even with a Republican president, we have seen a leadership void in both the House and Senate. This lack of leadership is one reason voters were persuaded to put the Democrats back in control.

History has taught us that real leadership must ultimately come from the president and an engaged public. Congress was not designed to lead, and its members, too often concerned solely with the next election, are afraid to lead.

Enough voters were so disgusted with the Republican leadership void that even Democrats looked appealing in contrast. This, despite the Democrats’ dismal record over 40 years in failing to fix the problems they caused. Out-of-control Social Security and Medicare costs, an insane tax code and rampant illegal immigration top the list. The costs associated with the escalating war on Islamic terrorism will only compound the crisis in the entitlement and tax code structures.

Most congressional Democrats are in denial that our economic infrastructure needs major renovations. The known problems will not go away, and they will not fix themselves. President Bush made a valiant effort to restructure Social Security with a proven solution, but weak-kneed Republican leaders did not follow. As a result, the Democrats’ denial and scare tactics torpedoed the president’s leadership.

Does all the bipartisan rhetoric mean Democrats might now embrace Bush’s personal retirement accounts proposal for Social Security or a continuation of the modest tax rate cuts that have produced our historic economic successes? Will the Democrats allow more free market solutions to improve Medicare and our health care system, or work with Bush to achieve victory over Islamic terrorists? I don’t think so.

Instead, Speaker Nancy Pelosi (D-CA) and the old warhorses of the extreme liberal left plan to push a seven-point policy agenda that turns back the clock from our 21st Century economic expansion to the grand old days of the Depression and New Deal socialism.

Researchers at the Heritage Foundation and numerous opinion writers and media pundits (present company included) have effectively argued the inanity and fiscal recklessness in each point of the Democrats’ agenda. The bottom line is that, for the next two years, Congress will produce at best incremental changes to miniscule issues that pander to those Americans content with the status quo. At worst, and of course not yet mentioned by liberal leaders, illegal aliens will be granted amnesty and Social Security benefits.

Some members of Congress on both sides of the aisle will tell you that the incremental movement in the legislative branch is just the nature of our three-branch system. That’s true, and that’s why we shouldn’t expect real leaders or real leadership to lead the day in the so-called People’s House.

Regardless of which party controls the proceedings, 535 wannabe leaders cannot lead our nation out of a paper bag. Congress has the power to approve, disapprove, review, recommend, reject and restrict laws. They use this power to manipulate regulations derived from the laws, intimidate regulatory agencies through the budgeting process and restrict our economic freedom through taxing and spending.

Though Congress is ideally an important component of the system of checks and balances envisioned by our founding fathers, it is essentially a committee of committees and subcommittees. That is why common sense solutions rarely make it to the floor of the House or Senate for an up or down vote. A committee that sets out to design a horse often ends up with a camel. A Congress that sets out to achieve a bipartisan spirit and accountability will end up with another volume to the tax code.

This nation has been blessed with a few great leaders, especially at the most critical times in our history. With a global war occupying our military and a crumbling economic infrastructure threatening our prosperity at home, we are unfortunately devoid of political leaders when we desperately need them. This leadership void must be filled by the people, and consistent public pressure. The pressure must come from all of us.

Control of Congress may give a few political party leaders a fleeting sense of power, but it cannot fill the genuine leadership void that plagues our nation’s capitol.

We will receive the leadership we demand, or accept the void we have.

We Have Another School Board Hot Mic Fiasco. Want to Guess What Was Said? Hint: It's Full-Blown Woke.
Townhall
Peter 'One-Horse Pony' Doocy asks President Biden about those $2,000 checks on their way out the door
Twitchy
Obstructing Biden Administration Cabinet and Sub-Cabinet Nominees -- The Democrats Made These Rules
Redstate
Insanity Wrap #154: Revolutionary Discovery That Two Plus Two Equals White Supremacy
PJ Media