Orwellian Logic at the U.N. 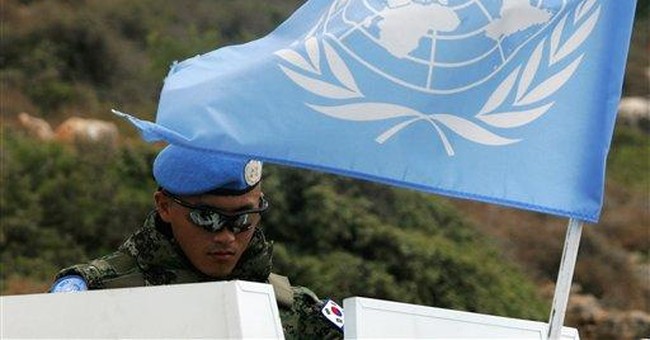 In George Orwell’s novel 1984, the protagonists in the totalitarian society employed “newspeak,” the inversion of words to create false meaning. “War is peace,” “good is bad,” “moral is immoral” are merely a few of the possible inversions.

While Orwell passed this mortal coil years ago, his notion of false meaning is alive and well and residing in the United Nations.

In fact, there is scarcely a sentence uttered at this institution that isn’t Orwellian. Human rights, for example, the hallmark of U.N. efforts does nothing to promote these rights. The commission organized to promote this goal is composed of the most serious violators of freedom.

The fifty-seven Muslim nations invariably condemn Israel as an autocratic nation occupying and dominating Arab territory in the West Bank. Yet this condemnation overlooks the fact that Arabs comprise twenty percent of Israel’s population, are accorded the citizenship and rights of every Israeli and even have representation in the Knesset. By contrast, Jews are oppressed in every Arab Muslim state, are denied their right to worship and, in most instances, have been forced to emigrate.

U.N. pronouncements have indicated “Zionism is racism” while, the racism or the denunciation of infidels – non-believers – is embraced whenever Wahhabism prevails.

At this late date, after 9/11, 7/7, the Madrid bombings and a host of terrorist attacks all over the world, the U.N. cannot come up with a definition of terrorism, relying, instead, on the empty cliché that “one man’s terrorist is another man’s freedom fighter.” Tell that to innocent women and children maimed by suicide bombers.

Terror at the U.N. is a relative term: if it leads to Jewish blood being shed or Western lives being lost, it is acceptable or, at the very least, not worthy of condemnation.

If Ahmadinejad violates the non proliferation treaty endorsed by the U.N., he is welcome to speak in its chambers as a conquering hero. Arafat brandishing a weapon as he spoke to the General Assembly was heralded as well.

Although the U.N. charter states specifically that nations can engage in “anticipatory self defense” when threatened, Israel is invariably rebuked for defending itself against attack with the absurd claim that Israel’s retaliation is “disproportionate.” If this standard were applied universally (of course, it isn’t) would that mean the U.S. should have responded to the 2800 deaths at Pearl Harbor with an attack on Japan that killed 2800?

As I see it, those who follow U.N. activity have an obligation to point out Orwellian newspeak. When U.N. officials ignore this critique –as they do– it should still be made public. Shame will not enter this U.N. equation, but the sources that provide funding should want to know why this multilateral organization has turned meaning on its head.

Those who cover the U.N. understand full well that a body housing democracies and dictatorships cannot long prevail as long as the good and bad are treated in the same manner. When Zimbabwe and the Sudan are considered the equals of the United States and the United Kingdom, relativistic standards must be imposed. Even a debating society must realize at some point that some views are more valid than others.

Hence word inversion is a useful, alas, a necessary tactic in an organization that refuses to consider a universal standard of justice, freedom, fair play, representative government and human rights. Orwellianism is the guide for nations that cannot justify their actions in the context of morality, but nonetheless want political recognition in this world body.

Moreover, the more one uses the languages of dissimulation, the more it is believed and accepted. It is a Gresham’s Law of communication in which the bad, or in this case the lie, drives the good or the truth out of circulation. That is the U.N. methodology derived directly from newspeak. Whoever said this isn’t 1984 hasn’t been to the temple of lies at First Avenue and 42nd Street in Manhattan.