No Longer Sarah Plain and Tall! 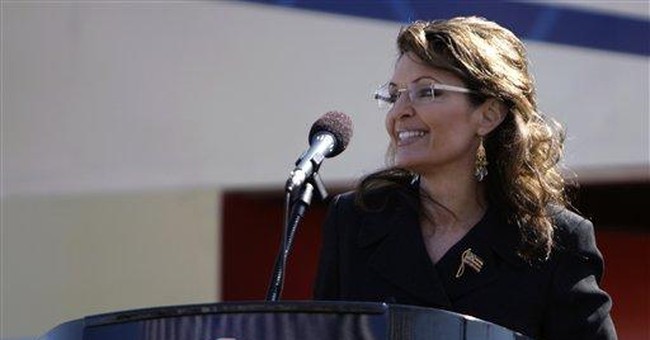 Last week Sarah Palin appeared on Bill O’Reilley’s show discussing a crude joke levied at her on the animated television show - “The Family Guy.” For those who may not have seen either the show itself or the O’Reilly interview, here’s what happened.

In the animated show two Sundays ago, a teenaged character named Chris is romancing Ellen, his classmate. She has Down Syndrome. As Chris delves into Ellen’s background, she makes this statement, “My dad’s an accountant and my mom is the former governor of Alaska.” The fact that the actress who does the voice for Ellen, Andrea Fay Friedman, has Down Syndrome in real life complicates this story. In fact, Freidman attempted to make Palin the bad guy by saying that the former governor has no sense of humor.

In an e-mail statement sent to the New York Times Friedman went on to say, “I thought the line...was very funny. I think the word is sarcasm... My parents raised me to have a sense of humor and to live a normal life.” Not a bad statement for an adult with Down Syndrome.

Friedman’s plausible defense of the program is obviously self-serving. Unfortunately, she reminds me of a black comedienne who uses the “N” word in her routine; but would picket any white person who did so.

Even more ironic than the fact the Down Syndrome actress wants to secure her career at all costs, is the fact that the program was aired on the Fox Family Network. The Fox News Network has hired Sarah Palin as a commentator, and is obviously very protective of the governor. This glitch shows that the Fox News Network operates independently from its entertainment branch.

Before I go forward with my comments, let’s take a moment to define Down Syndrome. The WebMD says that most kids with this condition have: “Distinct facial features, such as a flat face, small ears, slanting eyes, and a small mouth, a short neck and short arms and legs, weak muscles and loose joints though muscle tone usually improves by late childhood, and below-average intelligence.”

For my money, Bristol Palin gave the quintessential comment on the matter in a statement on her mother’s Facebook page. Bristol declared: “People with special needs face challenges that many of us will never confront ... why could anyone want to make their lives more difficult by mocking them? ... If the writers of a particularly pathetic cartoon show thought they were being clever in mocking my brother and my family yesterday, they failed.”

As the national debate rages about the latest set of tasteless remarks about the former governor and her family, there is a shift in the tone and tenor of the criticism levied against her. The comments about her do not reflect a new level of political persecution; instead they reflect the fact that the ex-governor is starting to reach icon status. Cultural icons like Sarah Palin and Tiger Woods are famous because of who they are - not just because of what they do. Icons don’t just make the news; they are the news. Their fans dote and their detractors perseverate. They fight the harassment of the paparazzi and the gratuitous use of their names and images. Simply sighting an icon can be a life-defining event versus sighting the garden-variety celebrity.

A great example of how one rises from celebrity to iconic ranks is the meteoric ascent of Paris Hilton. Her family name brought her into the limelight and her “jet set” lifestyle made her the envy of everyone on the celebrity party scene a few years ago. Suddenly she stepped into the icon zone. Wikipedia defines her career as follows: “an American socialite, heiress, media personality, model, singer, author, fashion designer and actress.” This means that she has no permanent job other than being a celebrity.

Returning to the assertion that Sarah Palin has become an icon, let me quote Time Magazine, which said last week, “Palin hits the same mystic chords as Clinton. A woman who goes to war against the 19-year-old boy who knocked up her daughter and then posed for Playgirl is far more comprehensible to most Americans than deficit spending is. In her Fox interview with Chris Wallace the day after her Nashville speech, Palin said she'd been focusing more on ‘current events’ since she quit as governor of Alaska.”

Even her political allies are starting to weigh in on the love vs. hate Palin campaign. A prominent Tea Party leader from Texas (Dale Robertson) is warning that the movement “is becoming nothing more than a wholly-owned subsidiary of the Republican Party.” He goes on to slam Sarah Palin as being a part of “a growing insider's attack to the heart of the Tea Party.”

Contrary to Mr. Robertson’s sentiments, countless newspapers and magazines are hailing Palin as the de facto leader of the Tea Party movement. If these writers are correct, her best selling book Going Rogue may become a manifesto. In addition, her commentaries on Fox may help focus and refine the insights of millions of followers.

Sarah, Plain and Tall is the title of a book and a trilogy of movies known by children everywhere. The award-winning book is a study of the universal themes of loneliness and abandonment. For months many Americans wondered if Governor Palin and her family could survive the rough and tumble atmosphere of modern American politics. Fortunately for Mrs. Palin, her epitaph will not be “Sarah Plain and Tall.” In fact her destiny is to become a culturally defining icon. She will undoubtedly become a role model of what a wife, mother, and citizen can be.