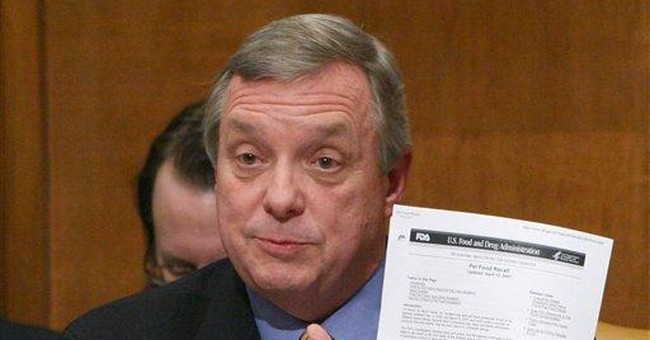 Last week, Senator Dick Durbin made comments that should have won him the “Most Racially Insensitive Remarks of the Year Award.” His statements were made in a committee markup. An audio recording of the heated exchange between Senator Durbin (D-IL) and Senator Brownback (R-KS) revealed the unfortunate bias of the Senator from Illinois. Senator Durbin justified the fact that 41% of pregnancies in DC are terminated by abortion by essentially saying, “It’s a black thing!” His exact words are listed below:

Durbin: In terms of safe, legal and rare, to the Senator from Kansas, I will tell you two things. First, it is a fact that a disproportionately large number of African Americans seek abortion in America, not just in the District of Columbia, but all across the nation.

Durbin: No, but it’s also a fact that a disproportionately large number of African Americans live in the District of Columbia.

Durbin: I’m telling you, look at the numbers.

Durbin: Look at the numbers, and you will find this to be true.

Brownback: This -- this is not high enough?

The problem with Durbin’s flippant, patronizing remarks were that they were classic statements of a bureaucrat that does not care about the welfare of people in the District of Columbia.

Many concerned residents of DC believe that there is a culture of death in the city. According to the Guttmacher Institute, the rate of abortion in DC is twice the national average. In addition, DC also has the highest HIV/ AIDS rate in the nation. Although the city has shaken its 80s and 90s moniker of “Murder Capital of the World,” there still needs to be special care given to the preservation of all human life – especially black life in DC. As I listened to Senator Durbin’s remarks, I could not help but think that if there were more white or Hispanic fetuses aborted, he would have been more alarmed. Like other kinds of black-on-black crimes, there seemed to be no remorse on the side of the political power structure.

Brownback said that before the federal ban against funding abortions was in place, DC shifted over $1 million from an AIDS fund to an abortion fund. Brownback’s amendment to preserve the ban on taxpayer-funded abortions in DC failed in committee, marking a low in the concern for life among those given oversight to the District’s affairs.

Let’s take a moment to trace the racial trends to which Durbin alluded. Let’s see if his logic holds water. Blacks account for over a third of all abortions in the nation, though they represent 12 percent of the population. Nationally, whites account for 58% of the abortions in the nation. This means that whites and other groups abort the remaining two thirds of babies nationally. Roughly speaking, approximately 1500 black babies are aborted each day in the nation. This is compared to approximately 3,000 babies aborted each day by others.

Returning to DC statistics, the 2006 abortion numbers show that blacks decided to terminate 78% of the pregnancies ended by abortion, while only 18.2% of the abortions were performed on white fetuses instead of the 26% national proportionality equations would suggest. Many concerned Americans want to know why so many black babies die. A National Public Radio program in November 11, 2007 showed that during the decade before, Washington, DC had one of the highest rates of teen pregnancies in the nation. At the time of that report, the decadal teen pregnancy rate had dropped from 1 in 6 teenage girls pregnant in 1996, to 1 in 16 by 2007. On that program Brenda Rhodes Miller, Executive Director of the D.C. Campaign to Prevent Teen Pregnancy, talked about progress that had been made and work still left to be done.

The DC Campaign To Prevent Teen Pregnancy is a 501(c)(3) nonprofit organization established in April 1999 as a result of the work of the Mayor’s Committee on Reducing Teenage Pregnancies and Out-of-Wedlock Births. The leadership of this organization is comprised of many card-carrying Democrats. This means that lowering abortion rates can be a bi-partisan effort. The Board of Directors of DC Campaign to Prevent Teen Pregnancy is composed of local and national community leaders who are committed to improving the lives and well being of teens. Current board members include former DC city council members and noteworthy citizens, including both ministers and secular leaders.

One can only wonder how much higher the abortion level in the District might be if there had not been a moratorium on funding abortions. DC is clearly in a precarious place concerning this issue. Other regions are taking important leadership steps that DC might follow. Arizona, for example, just passed legislation that includes guidelines for abortions: a one-day waiting period, parental notification for minors seeking abortion, and doctor's disclosure about the risks and alternatives.

All of us can make a difference in this emotionally charged debate. As citizens, we must continue to actively, boldly and compassionately work to reduce abortions. I believe it’s possible to decrease the number of abortions by 50 percent over the next ten years.

In conclusion, Durbin got it all wrong. He is supporting continuing a culture of death in the nation’s capital. We, however, must abort abortion.