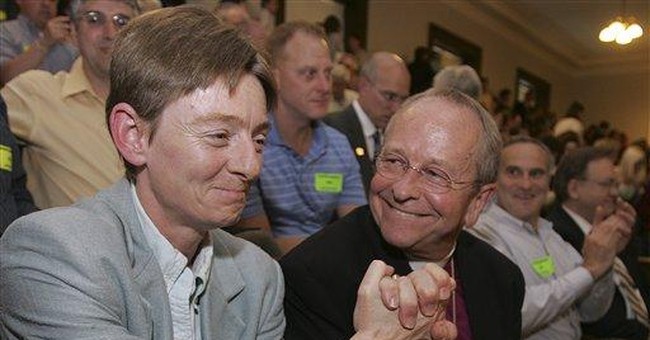 Late Thursday, U.S. Department of Justice lawyers filed a motion to dismiss a case that challenged the 1996 Federal Defense of Marriage Act often referred to as DOMA. DOMA currently prevents couples in states that recognize same-sex unions from securing Social Security spousal benefits, filing joint taxes, and other federal rights of marriage. Justice Department lawyers concluded that allowing federal marriage benefits to gays would infringe on the rights of taxpayers in the 30 states that specifically prohibit same-sex marriages.

Naturally, gay activists were upset, apparently angered that they could not just bend the Department of Justice to their will. Perhaps I should not be surprised by their ire. Their greatest allies have been out-of-control courts and runaway legislatures.

Yet I was very surprised at how disrespectful they seemed to the White House. It appears that these groups feel the administration owes them a special dimension of allegiance. Despite the president’s promise of greater gay inclusion in the political mainstream and his declaration that June should be considered gay pride month, gay activists like the Human Rights Campaign, a gay rights lobbying group based in Washington and Lambda Legal, called on Obama to begin steps to end DOMA as he promised on the campaign trail. President Obama would be very unwise if he caved into the pressure tactics of gay activists at this early stage of his presidency. After all, many Christian leaders have been disturbed by the president’s stand on abortion, his lifting the bans on embryonic stem cell research, and his liberal economic policies.

Even though the president made very explicit and emphatic campaign promises that he opposes DOMA and would call for Congress to repeal it, the president is too smart to knuckle under to the cries of a vocal minority that cannot shift the balance of power in his favor in either 2010 or 2012. For these reasons and others, Justice spokeswoman Tracy Schmaler made the inevitable statement, “Until Congress passes legislation repealing the law, the administration will continue to defend the statute when it is challenged in the justice system.”

While all of this is happening on a national level, grassroots pro-marriage activists need to seize the moment by reversing some of the victories that gay marriage advocates have achieved. We need to ta ke advantage of President Obama’s lack of support for gay marriage and slow down the momentum of the gay movement. The best way to do this is to give the voters a chance to let their voices be heard. After all, in the 30 cases in which the people were able to choose; they chose marriage between one man and one woman.

Two battles in which we are most poised for victory in the near future are Maine and Washington, DC. First of all, the state of Maine is ripe for a reversal of its recently minted same-sex marriage laws. Secondly, the DC City Council’s decision to pursue gay marriage can be derailed by an irate electorate that feels disenfranchised.

The efforts toward a DC DOMA are headed by Rep. Jim Jordan (R-Ohio) and Rep. Dan Boren (D-Oklahoma) and 28 co-sponsors, demonstrating the bi-partisan agreement toward defending traditional marriage. DOMA is a legitimate exercise of Congressional power under the Full Faith and Credit Clause and does not violate either the Equal Protection Clause or the Due Process Clause of the United States Constitution. We must use legal measures to continue the battle to protect our families and our way of life now. We must encourage “Blue Dog” Democrats to work with Republicans and see this Act become law.

There have been previous introductions of a DC DOMA in Congress and gay activists are assuring themselves that this proposal will fall flat as=2 0 others have in the past. In fact, Mitch Wood, President of Gay and Lesbian Activists Alliance of Washington, D.C. has said, “We already have assurances from House Speaker Nancy Pelosi that she opposes any congressional action to overturn the marriage-recognition legislation, now in its congressional review period and expected to become law on July 6.

“We are working in coalition with several local and national groups committed to GLBT equality, in addition to our good friend and champion, Congresswoman Eleanor Holmes Norton (D-DC), to ensure that both the currently-pending bill and the full marriage equality bill expected later this year will withstand any attempts to overturn them at the local or congressional level. We will keep you apprised of developments.”

Gay radicals were not expecting pro-marriage America to resist their strategies so vehemently. Our endeavors in Washington have been successful thus far because we have brought blacks, whites, Hispanics, and Asians together based on their common belief in biblical marriage. Such camaraderie makes the overwhelming possibility for all communities across America to rise up together. Our goal is not to just register a political opinion; we must protect marriage for the next generation. We must guard our children’s religious liberties which will likely be abridged under massive gay legislation.

While our organizations work to speak with every congressm an on Capitol Hill, it will take the grassroots of community mobilization to achieve our goals. You are most important in this effort. Let your representatives know that you stand for biblical marriage and you want them to vote YES to DC DOMA. If you need to know how to contact your representatives, log onto www.thetruthinblackandwhite.com Become a voice…make a difference…defend marriage!