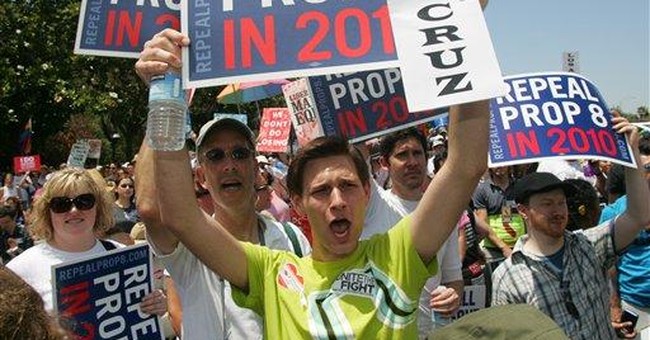 Last week marked a nadir in the battle for biblical marriage. Two huge events occurred. First, former VP Dick Cheney voiced his support for same-sex marriage. Second, New Hampshire became the sixth state in the Union to legalize gay marriage. Despite these two events, nationalizing same-sex marriage is absolutely not inevitable. Gay marriage proponents are only too aware that the recent California Supreme Court ruling that the 2008 Proposition 8 victory will stand guarantees that a fresh round of marriage amendments, initiatives, and referendums will undoubtedly be levied in the states that have scored temporary victories for same-sex marriage.

I must admit that Cheney’s defection from his party’s long-term stance on marriage was especially disappointing. His open admission of his transition to same-sex marriage advocacy - which places him left of President Obama - seemed especially hypocritical in light of his second term ascension to power on the wings of the same sex-marriage controversy. Perhaps this admission explains why the Bush administration ran out of steam on the issue shortly after their 2004 victory. Numerous pro-family groups who have supported the GOP for years are questioning where their values will find a new political home.

While these groups meditate on the political ramifications of recent marriage regulations and decisions, new alliances are being formed and millions of nameless and faceless Americans will soon join the struggle to affirm biblical marriage. The New Hampshire legislature muddied the waters in the marriage debate by attempting to throw the religious community a bone, declaring that conservative ministers would not be forced to perform same-sex marriages.

Despite the New Hampshire governor’s attempt to paint this as a compromise position, the religious services exemption is tantamount to giving pro “biblical” marriage proponents the sleeves out of one’s vest. In most cases openly gay people will not seek out conservative ministers to perform their weddings. Only activists seeking a precedent setting case would even entertain coercing a biblically faithful minister.

Knowledgeable pro-traditional marriage advocates understand that the real danger lies with the unintended consequences of gay marriage on the next generation. Redefining marriage, redefines family, the redefinition of family changes the definition of parenting, the definition of parenting changes the dynamics of education. As a result, in the state of Massachusetts, eight-year olds are reading Heather has Two Mommies. To make things worse, their parents cannot opt out of these classes.

In California five-year olds are asked to become gay “Allies” and they can join such a club, which meets during breaks in their elementary classrooms. These kinds of ill-advised social experiments may produce a host of unexpected consequences. If gay marriage is allowed, the nation will soon begin to experience more and more degradation of the nuclear family - resulting in fewer kids being raised by both a mom and a dad. There have been no studies that suggest that any other marriage arrangement beats the power of having one mom and one dad investing in their own biological children.

What will the landscape of America look like if same-sex marriage is legalized across our nation? According to the writings of Dr. Stanley Kurtz, nations who have gone this way see a dramatic increase in out of wedlock births, long-term singleness, and other symptoms of the devaluation of the institution. If the American family loses the presence of its birth dad in the home, there will be several huge consequences.

Malcolm D. Williams in 1997, used a sample of 1,610 10-13 year-olds in a study. He found that children who learn to share significant ideas with their fathers had fewer behavior problems and developed stronger cognitive abilities than their peers.

The Journal of Family Psychology in 2000 reported a study of 116 African American students ages 10-13. The boys with married parents were found to have much higher levels of self esteem and a better sense of personal power and self-control compared to single-mother homes.

Repeatedly, scholarly studies focused on adolescence show that early onset of puberty in girls is a major problem. It is associated with negative psychological, social, and health problems. Depression, alcohol consumption, and higher teenage pregnancy rates are some of the results. An eight year study of girls and their families showed that a father’s presence in the home, with appropriate involvement in his children’s lives, contributed to later pubertal timing of the daughters in the seventh grade.

These studies and scores of others suggest what most Americans have always known: that both boys and girls, are deeply affected in both biological and psychological ways by the presence of their fathers. We have emphasized the father half of the biblical duo called “parents,” assuming the mother is intact within the family setting.

In conclusion, let me cite the fact that even former Vice President Al Gore sees the need for strong fathers to remain in the nuclear family. In June 2000 he said, “Don’t ever doubt the impact that fathers have on children. Children with strongly committed fathers learn about trust early on. They learn about trust with their hearts. They learn they are wanted, that they have value, and that they can afford to be secure and confident and set their sights high.”

Most gay activists do not seem to understand that two mommies or two daddies cannot replace the balance of one mother and one father. Despite the incredible adaptability of children, our entire culture should advocate for family structures which promote the most positive environments of our next generations.

Let’s set our sights high. Let’s not fall victim to the inevitability argument of our opposition. We need simply need an army of bi-partisan leaders to strategize, organize, and prioritize the protection of marriage!