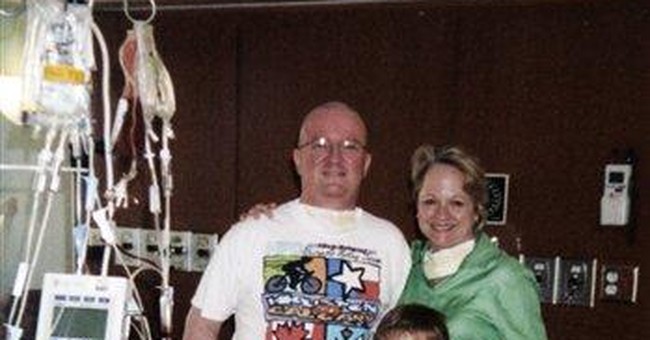 Just two years ago my wife and I sat in the office of a world famous surgeon at one of the nation’s most prestigious hospitals. As we stared into the face of this sharp, young physician, we felt inspired and hopeful. The doctor exuded confidence despite the fact that he told us that the type of cancer I was fighting was especially deadly – on average only 15% of patients following traditional surgical approaches lived five years after surgery. His institution, the world famous Johns Hopkins University Hospital, had developed a special treatment protocol which was years ahead of most domestic hospitals. Their techniques promised to quadruple my survival prospects.

This treatment required massive doses of chemo therapy, radiation, multiple surgeries, and post surgical chemo. After conferring with our doctors, we decided to go with the Johns Hopkins approach. The drive to the hospital was a great deal farther than other local hospitals, but we made the commitment because of the caliber of treatment we knew we would receive at the hospital.

The biggest shock of the entire process was that we received a large bill for the first minor preparatory surgical treatment- insertion of a special feeding tube, and a rare 24 hour chemo delivery system. The first chemo treatments were called “experimental” and bill of nearly $10,000 was racked up in less than two weeks by the preliminary procedures. There was a constant tug of war between us and the insurance company. The insurance company preferred local doctors and local tests. Hopkins, seemingly impervious to the insurance company’s complaints assigned a team of five doctors to manage my case, because of several complications I experienced in the course of treatment. Eventually the insurance company paid for all my tests, treatments, and procedures. The fact that I actually just cheated death on two occasions prior to the major surgery was the defining factor of the treatment protocol.

Today (eighteen months after surgery) I am cancer free. I am glad I worked with Johns Hopkins Hospital. I am convinced that their superior care has contributed to my survival. The cost of this new lease on life was approximately $100,000 of unexpected personal costs beyond traditional medical costs. These numbers do not include personal income loss due to illness. Was it worth the price? You better believe it was. I am thankful to be alive.

Recently, a lady at my health club stopped me to enquire about my doctors and the treatment I had received. Her father, who lives in England (under universal health care), has the same type of cancer but was essentially sent home to die. She is attempting to get my doctor to consult with his physicians overseas.

I am convinced that Americans have the world’s finest doctors and best hospitals. Our national conundrum is how we help each individual get the care they need.

Unfortunately, many Americans have too few treatment options available to them. Further, a huge number of our citizens are not covered at all. I have yet to see the program that answers all the issues, but I am encouraged by the direction that some opinion leaders are taking.

Senator Sam Brownback has made the following statement,

“Our healthcare system will thrive with increased consumer choice, consumer control and real competition. I believe it is important that we have price transparency within our health care system. This offers consumers, who are either enrolled in high deductible health plans or who pay out-of-pocket, the ability to shop around for the best prices and plan for health care expenditures. Also, the existing health insurance market forces consumers to pay for extra benefits in their premiums.”

“America is at a crossroads when it comes to our health care. All Americans want to increase the quality, affordability and portability of health care… I believe we can reduce costs and improve the quality of care by increasing competition. We can do it through tax cuts, not tax hikes. We can do it by empowering patients and their doctors, not government bureaucrats. That's the American way to reform health care."

“… spending is now about $2 trillion a year, which is close to $7,000 for each one of us. It consumes about 17% of our gross domestic product, easily surpassing the few European nations where spending is close to 10% and far higher than any other country in the world. If we reduced our out-of-control health care costs from 17% to 11%, we'd save $700 billion a year, which is about twice our annual national deficit.”

In addition to these quotes most thinking leaders would agree with the following conclusions:

1. The tax code needs to be reformed so that it does not penalize Americans without coverage.

2. Health access must be given to impoverished or low income citizens (a tax credit may be best way to handle this).

3. The nation needs to accelerate the speed of drug evaluation and release by the FDA.

4. Incentives that promote wellness and disease prevention must be written into health insurance programs.

There is a huge need for Americans to find an answer to our health care woes. As we have already stated, our medical system is the best in the world. Our doctors, nurses, and hospitals are the finest available on the planet. There is just one thing missing – the ability to make healing our own people a priority. We must heed the biblical challenge that was given to Jesus in his earthy ministry, “Physician, heal thyself!”