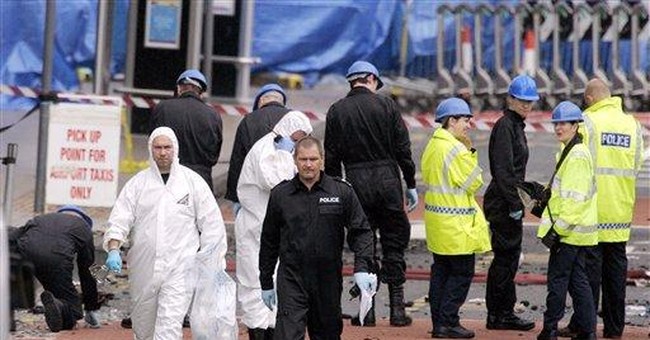 “Allahu Akhbar” --- God is (the) greatest! was shouted by a man as he swung his fists at an innocent bystander in Glasgow, Scotland. The screamer was involved in a botched attack on that city’s airport. He and his accomplice planned to kill or maim enough UK citizens to release a fresh wave of fear over the nation.

What he lacked in skill he made up for in zeal, and, to a certain extent, he succeeded. After all, he made the front page of most newspapers and was the lead story on most radio and television news programs.

Unholy acts of torture, suicide bombings, and beheadings have become choice methods of religious expression for some Islamic radicals. There have been too many incidents to dismiss these attacks as isolated outbreaks. Only the naïve believe that the flare up of radical Islam is a temporary response to the wars in Iraq and Afghanistan.

We ask, “How is it that a tolerant, politically correct society like Britain provokes people to respond to the nation in such a manner?” This is an inappropriate question that presupposes that the West is creating an atmosphere of conflict. A more appropriate query is, “Why is Islam trying to dominate the world again?”

We are observing an age old pattern of Islamic imperialism. This is not the result of U.S. and British foreign policy glitches, alone. These are the pervasive and dangerous manifestations of an ancient ideological war. Traditional-minded Islamic families and mosques are raising a new generation of terrorists as intolerant advocates of jihad. While I would be the first to say not all Muslims are evil, I would be very quick to add that we cannot separate the political aims of Islam from its spiritual goals. Unfortunately, in the name of religious tolerance, western cultures may actually be emboldening a terrorist element in their society.

This past week, terrorism was on the mind of every American traveling overseas. My wife and I were in Greece during the tumult. Modern day Greeks are painfully aware of the nearly 400 years of domination their ancestors suffered under Turkish Muslims. Churches and historic buildings were desecrated during the Muslim occupation of the land. The Greek light of democracy and freedom was snuffed out during a long night of national fear. One of the greatest civilizations in human history lay ravaged and imprisoned by a backward, brutish occupation force that only understood the politics of the sword.

Further, religious intolerance was practiced in Greece just as it is every nation in which Islam has the upper hand. For example, “non believers” paid higher taxes, had no say in the government, and were not free to evangelize others. In some modern nations non-Muslims cannot even enroll in school until they change their Christian names to Muslim names.

Greece was set free because they mobilized a religious revival along with military/political action in 1822. God’s grace helped them overcome horrific odds and turn their nation around. Many people died during Greece’s 400 years of occupation, but until Greek apathy died they were unable to turn things around.

Just one day after Gordon Brown became UK’s prime minister, he had to deal with one of the major threats of the next decade – terrorism and Islamic fascism. It was almost as though his enemies said, “We want the new government to know that they have to deal with us.”

How should the UK and other European countries respond to modern Islamic imperialism? They should be totally intolerant to any immigrant violating their national laws, even in the name of cultural pluralism. Next, countries applying to the European Union, such as Turkey, should demonstrate internal religious liberty and a willingness to accept non-Muslim citizens. Finally, terrorist violence should be punished quickly and fiercely.

Sometimes westerners are so concerned about giving other religions “absolute religious freedom” that they allow these groups to undermine everyone else’s freedom. I have seen video tapes of the kindest looking little Muslim children vowing to kill Americans, Christians, and Jews.

Christians are being jailed internationally for preaching against sexual sins and the gay lifestyle. Conversely, western governments are starting to look the other way as Islamic groups incite terrorism and attempt to set up Sharia law (which violates their nation’s internal laws). Islamic radicals do not feel that our concessions are olive branches of peace; they believe that western governments are so depraved that they should honor the “superiority” of Islam. The west is so afraid of making Muslims mad or appearing racist that they violate basic principles of domestic justice.

The UK experienced God’s grace and divine protection this past week. These attempted attacks should be seen as warnings. Ironically, on the day of these foiled attacks, I stood on the very spot where the apostle Paul brought the gospel of Jesus Christ to Athens. He preached to them about an “unknown God” that had been worshipped in Athens – but not fully understood (Acts 17:23). Perhaps God is telling all of Europe to stop following humanistic and atheistic philosophies. The greatest hope for civil peace in the region, once considered the cradle of Christianity, is to stop acting as though the God of Christianity is unknown to them.