Up With Veto Power 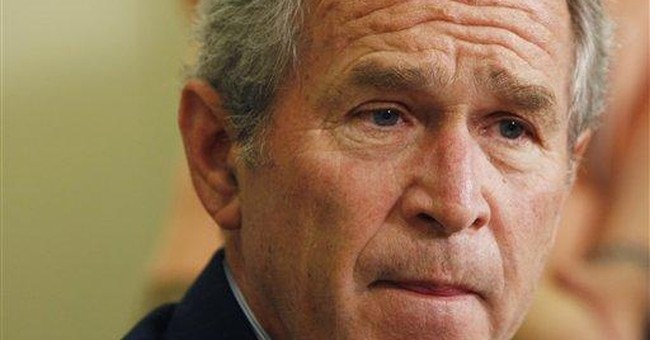 On 9-11, I was shocked by the news concerning both the Pentagon and the World Trade Center. I closed my downtown D.C. office early and headed home. I’ll never forget the traffic jams that we experienced that day. Yet the commuters were more courteous than they had ever been before. The police and state troopers were obeyed with gratitude by dazed workers who worried about the nature of the attack on our nation.

During the next few days, President Bush came to the forefront and set all of our minds at ease. His presence in New York was comforting and his words exuded a confidence that was contagious. Most Americans were glad he was in charge. Some even publicly said that Vice President Gore could never have responded to the crisis as well as George Bush did. At the end of that period, the President’s approval ratings were at their all-time high. We were willing to follow him anywhere he led. It seemed as though everyone thought that our national authority was resting in the right hands.

Last weekend, I happened to listen to a C-SPAN broadcast that focused on the problems of the Iraq War. It was hard to believe that these folks were speaking of the hero of 9-11. Bob Woodward, of Watergate fame, spoke very disparagingly about the foibles of the current administration.

In addition, President Bush was personally accused of some of the greatest abuses of power since Nixon. The participants in this broadcast also made a clear reference to psychological problems similar to Nixon’s. His accusers cited cases in which he redefined laws, allegedly misled the nation, and mismanaged multiple opportunities to redeem his reputation or legacy. They made the poor man sound totally schizophrenic. On the one hand, he is so tenacious in the pursuit of the Iraq War because his personal vendetta went haywire. On the other hand, Bush was seen as being too passive concerning Katrina and a host of other issues.

As a result of these kinds of perceptions and his diminished approval ratings, the President may be tempted to just try to ride out the next 18 months with as little conflict as possible.

I personally hope that he will be bold and use his power to protect America. Even though he is a lame duck, he still has a huge opportunity to leave a final contribution that will be remembered. His legacy will be determined by taking steps based on sound political analysis and deeply shared moral principles.

I was encouraged by the fact that the President decided to veto an embryonic stem cell bill last week. Cynics like Hillary Clinton called Bush’s veto a totally political decision based on ideology. Others, like Charles Krautheimer who spoke out on FOX’s Special Report with Britt Hume, said that they respected the fact the President had acted on the basis on genuine moral concern.

Perhaps the President will come full circle and back the morally-minded, values concepts that got him elected in the first place. Millions are waiting to see the man they elected appear again. In their hearts, they have wondered whether a George W. Bush impostor has taken residence in the White House.

A June 20th A.P. article written by Deb Reichman made the following observation “…Announcing his veto to a roomful of supporters, Bush said, ‘If this legislation became law, it would compel American taxpayers for the first time in our history to support the deliberate destruction of human embryos. I made it clear to Congress and to the American people that I will not allow our nation to cross this moral line.’ "

Even though that sounded like the old George Bush that the “Values Voters” of 2004 voted for, many of them anticipate that he will use his veto power again. I personally hope that he will keep his promise to strike down the Local Hate Crimes Prevention Act of 2007 (HR1592) passed in Congress this May. He must veto this law because of legal loopholes which can limit our religious liberties and muzzle the Church.

Let the White House know we want the strength of the man we elected to show himself courageous and veto the Hate Crimes Bill at comments@whitehouse.gov.