The State of the Union Address – The Missing Page 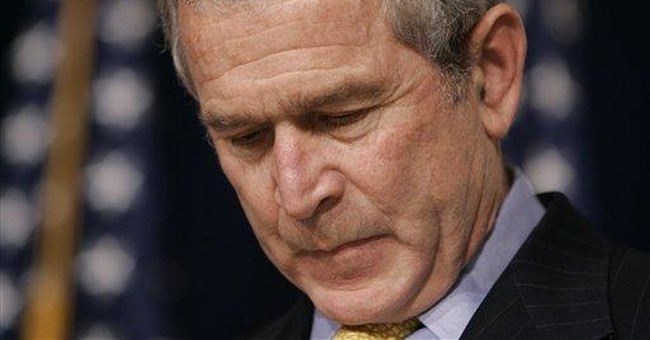 Last week’s State of the Union address was well-rehearsed, clear, and very cogent. Many believed it to be one of the president’s best efforts at oratory. Saturday’s Washington Times carried an article entitled, President's Union Speech Pleases Conservative Base. This article suggests that most conservatives feel as though the president’s tone and demeanor showed strength and resolve. They were comforted by the thought that the president is not going to abdicate his strong leadership role in the nation.

Unfortunately, evangelical Christians, who are one of the most loyal groups of the president’s supporters, feel just the opposite. They feel that President Bush has started to back away issues which he heroically championed just two years ago. Their concern with The State of the Union speech was not about what the president said. Their concern was focused upon what he did not say.

The Wall Street Journal ran a front page article on January 24, 2007 entitled “Bush's Conservative Base Frets.” The article suggests that the Christian right is not alone in their reservations about the president’s speech. The article points to a joint WSJ/NBC News poll which stated that the issues which most concern conservatives (after the war and terrorism are taken off the table) are moral values and poor control of immigration. The people polled were not just “wild eyed” evangelicals – they were conservatives of every stripe. In other words, the values voters of 2004 have not gone away. The war and terrorism have just temporarily eclipsed the ongoing cultural concerns of many social conservatives.

Tony Perkins, President of the Family Research Council made the following declaration: "I applaud the president's leadership. He refused to surrender his role of commander-in-chief to the new majority. However, I believe the president failed to challenge the new majority to advance core family and cultural issues, issues that many in the new majority campaigned on last year. These same issues will motivate pro-family Americans to rally around an administration that needs support."

Despite the media hype about evangelicals abandoning the GOP and the president in last November’s election, it seems that this group has remained rock solid. Perkins’ comments beg the question, “Are social issues polarizing or have they become overly politicized by political opportunists?”

Over the years, evangelical organizations like the Family Research Council have been unwavering in their support for the president. They have often felt unheard and neglected although they have delivered huge numbers of votes to the GOP. Ironically, white evangelicals have felt as though they have painted themselves into a political corner. On the surface, they appear to be the mirror opposite of their black evangelical counterparts, who have historically supported democratic leadership. Both blacks and whites have received more lip service than results from their high touted, public officials.

Most evangelicals (black and white) believe in the president’s heartfelt faith. On the other hand, a minority of faithful, evangelical church-goers are beginning to question the GOP’s sincerity. David Kuo’s kiss-and-tell book, Tempting Faith, adds fuel to this beleaguered group’s thinking. It portrays a secretly exploitive administration which plays the “faith card” without sincerity.

I cannot buy Kuo’s conclusions. The work has the feel of a remorse filled biography. It is as much of a personal expose’ as it is a repudiation of the White House. However, I don’t want to minimize Kuo’s struggle to keep his own motivations pure. In fact, I pray that Kuo will find peace.

On a macro political level, the nation needs the moral voice of the faith community. Therefore, many evangelicals are unwilling to withdraw from the political arena. While only time will reveal the true sentiments of the White House, I believe the administration has simply been attempting to juggle too many diametrically opposed agendas.

This juggling act will become both confusing and exhausting to maintain. Tony Perkins and others are saying, “It’s time to stop juggling!” “Lead, based on your core principles,” they declare. Their argument is that new black, white, and Hispanic alliances will emerge in the religious world. These grass roots alliances (around socially conservative issues) will force the new Democratic leaders and Republicans to work together. This process of change will be slow and tedious.

If Perkins is correct, the president missed a great opportunity to create some bi-partisan traction for socially conservative issues. It’s time for a paradigm shift. Both the White House and the evangelical movement must learn how to build bridges in new ways. The administration’s softened position on marriage protection, the sanctity of human life, and a host of other social issues will not help boost his approval ratings. The president’s voting base wants to see him lead with conviction on issues that matter to them. The President’s “fall from grace” may end when conservatives see this happen.