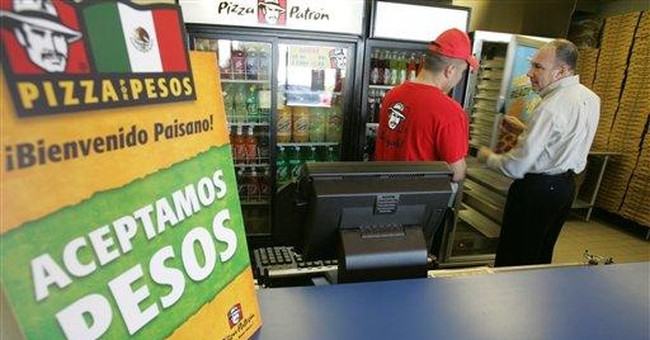 Every American knows that one of the biggest blights upon America’s legacy of freedom and economic opportunity was slavery. Slaves were pushed beyond normal limits. In fact, they were treated like chattel or livestock versus full-fledged human beings. In addition to atrocious working conditions, slaves were often disciplined severely with whippings, torture, and lynching. It took the nation over a hundred years and a civil war to wean itself from its first addiction to cheap labor.

Like a man returning to smoking, our generation has once again gotten hooked on cheap labor. Unfortunately, we are forgetting that this kind of labor may be dangerous to our national health.

What am I referring to? The cheap labor of illegal aliens. They are victims of what I would like to call “the new slavery.” Although the problem can be solved, it is important to remember that the situation is complex both morally and economically. The advocates of amnesty programs often opine that U.S. citizens are not willing to do jobs that “illegals” eagerly perform.

Last month, Swift & Co. was raided and 1,200 people were arrested on alleged identity theft and immigration violations. This company is a meat processor who was hit in six states by federal authorities. This kind of raid sends a signal to large companies that they are not exempt from the laws of the land. A slap on their wrists with financial ramifications and lots of negative PR will go a long way towards creating a sense of urgency with regard to reforming “the new slavery.” Swift will have to create an American-caliber job site – instead of a third world plant on American soil.

As much as I rejoice over the way companies like Swift are handled, I am concerned about smaller companies operating in remote areas. These companies’ survival may actually be challenged by hasty enforcement transitions. Let me give you an example of what can happen in a small community.

Labor Day weekend, Crider Inc. based in Stillmore, GA lost nearly 700 of its mostly Hispanic 900-member work force. Stillmore has an interesting history. In the late 1990s, Hispanics began to move to the area. Since then the Hispanic population has tripled in the state of Georgia. Therefore, problems we would equate to border towns in other states began to occur in the deep South - the buckle of the “Bible Belt.” At that time, Crider’s processing lines were made up predominantly of African-Americans.

The change to a Latino workforce, predominately from Mexico, was gradual. The company’s officials have repeatedly assured the press that their Hispanic hiring practices were unintentional (which I find hard to believe). Safety standards seemed to deteriorate. The poultry industry is known for slippery floors and bitter cold working conditions. Crider took employee danger to another level with the accidental death of one of its employees in a forklift accident in 1997.

But what do you do when the change comes too fast? How do we add quality jobs to the national economy? Don’t get me wrong, I am not in favor of giving a shady company a get-out-of-jail-free pass. I do want to recommend that a strategic approach be taken to cleaning up the thousands of companies who are practicing a new form of slavery.

The black community temporarily benefited from the new jobs which were made available. Unfortunately, the company did not think through its transition. Under the current structure, these positions are an invitation to be permanently added to the bottom rung of the American work force. In the future, even nationalized employees will want something to look forward to - a career path or a personal road to prosperity.

The inevitable upward aspirations of future workers must be balanced with the company’s ability to turn a reasonable profit. Crider is experiencing a crisis and still needs 300 employees to return to normal output levels. Simply put, the transition is not working.

The economic impact of the Crider raid may be one of the reasons we don’t see heartier enforcement efforts on a national basis. After the raid, the company suddenly raised pay. Next, they sought replacement workers. Two hundred were hired through a state funded employment agency. The plant was ill-prepared for such a dramatic change of workers and black workers have not stuck. The company is experiencing high employee turnover and even threats of legal action from disgruntled new employees.

According to a Wall Street Journal story of January 17, 2007, the productivity of the plant has dropped by nearly 50%. The pincher movement of rising labor costs teamed with lower productivity may temporarily threaten this company’s profitability and perhaps its survival. The Journal says that Crider is now looking to Laotian Hmong workers from Minnesota and Wisconsin to fill in the blanks.

What does this mean for this company, the community, and the nation? It seems to me that immigration reform has to become a priority - not an afterthought. Pat answers and blanket amnesty approaches simply muddy the waters. Therefore, I recommend we close the borders and start the long process of Americanizing American businesses so that free enterprise can truly work.