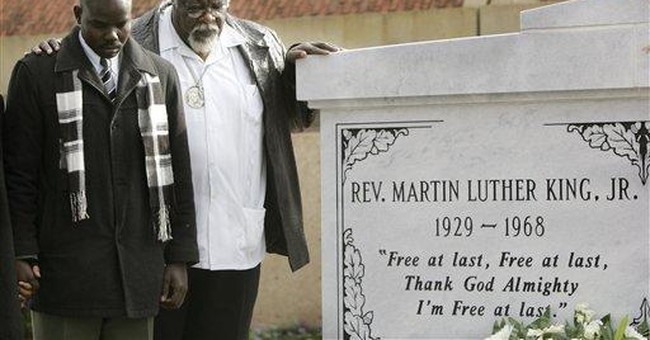 Everything from legalizing gay marriage to withdrawal from Iraq have been couched in the terms: “Martin would have been for this!” The truth is that we can only take his speeches and writings and infer how he would have navigated the murky waters of the third millennium.

Therefore, before we start making pontifical statements about the nature of King’s direction, let’s review the history of which we are sure.

Aware that discussing these issues candidly could ignite bitter, violent outbursts, King appealed to the faith of the African-American community. He encouraged his listeners to believe in the power of biblical justice. King’s sermon went one step further than most of that day by encouraging them to act on their belief in divine justice and use the American tradition of legal protest.

During the next 30 days, King received 30 to 40 threatening letters or phone calls each day. King wrote in “Stride Towards Freedom” that one night he received an ominous phone call just as he was about to doze off to sleep. The caller promised that before seven days passed, King would be sorry that he ever came to Montgomery, Alabama.

By his own admission, King was afraid and offered a desperate prayer from his kitchen table. He felt as though he could hear an inner voice saying, stand up for righteousness, stand up for truth; and God will be at your side forever.

Although King’s uncertainty disappeared, three days later his house was fire bombed. Steadied by his “kitchen prayer,” he boldly preached to the crowd that gathered outside of his badly damaged house. He sent them away with his own firebombs of love and faith instead a call to arms, riot or violent retaliation.

We celebrate Dr. King’s birthday not just because his courage and resolve advanced civil justice for blacks. His life was also a gift to all Americans. Today, his dream is a living legacy, which is still changing the nation.

There is no question that Dr. King was a great man. Yet he may not have been as unique as many would attempt to paint him. In all due respect to Martin Luther King, Jr., Rosa Parks, Ralph Abernathy, Andrew Young, and countless other civil rights luminaries, the black church was their spiritual mother. Each one of these leaders took their cues from the historic charter and mission that the Black church had set for itself.

Many excellent black churches commissioned their leaders to the dual role of biblical interpreter and social reformer. Just like the Old Testament prophets, black preachers have charged with the task of bringing a sense of divine justice to the social ills of their generation.

One strategic contribution was the church’s involvement in creating the first major black financial institutions: banks and life insurance companies. Black churches not only provided people with spiritual comfort and hope but also established an economic support system that served to lift their people.

The church emerged as a credible bridge to future financial power for financially cautious former slaves and their descendents. The church refused to wait for a government welfare agency or secular non-profit organizations to lead the way.

The black church remained vigilant through the years. Time and time again, she has risen up important leaders who were wedded to the unique needs of both their people and the American culture. For example, overcoming the devastation of the Great Depression was no easy task for anyone in America. Thankfully, new heroes arose in the black community to meet the challenge in the 1930s.

Some black churches held classes in the fundamentals of job seeking and household economics for people. In addition to public training, behind the scenes pastors negotiated access to jobs in hospitals, stores and schools. These jobs had been closed to blacks prior to that time.

Each generation has had several black leaders arise from the black church to innovatively guide its constituents. In light of this history, we return to the question – “What would Dr. King do today?”

King would most likely be a social conservative. He would attempt to protect families and the dignity of both working class people in the U.S. He would not ask big government’s permission to confront the Goliaths of poverty, crime, drug abuse and teen pregnancy that stalk urban America. King would rally local church leaders and begin to solve tangible problems through volunteerism.

Dr. King knew that the greatest obstacle to social advancement in both the black and the white communities is a lack of vision, courage and determination. In this regard King was like former Supreme Court Justice Thurgood Marshall who explained his enormous success in challenging the racially biased application of laws during the civil rights movement like this: “I did what I could with what I had.” Like Dr. King, that’s the best any of us can do.