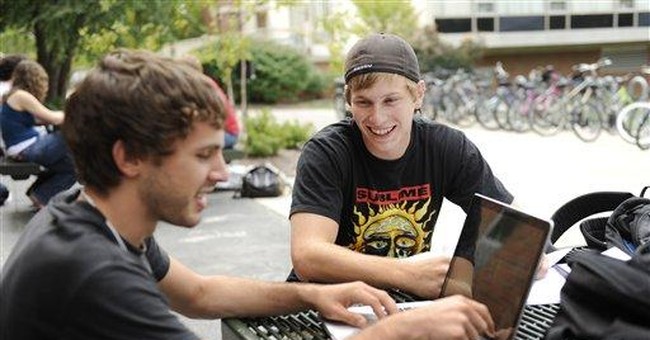 SKOKIE, IL – Hundreds of Chicagoland residents flocked to a townhall meeting on education reform last week, as school choice advocates continued a nationwide push to highlight the issue during National School Choice Week. The program, which was co-sponsored by local conservative talk station AM 560 WIND, featured a panel discussion among syndicated talker Michael Medved, political strategist and author Dick Morris, and former House Speaker Dennis Hastert. The trio traded ideas on how to improve America’s schools and attempted to diagnose a number of the system’s key flaws in a discussion moderated by John Tillman of the Illinois Policy Institute.

“Our current system is wrong. Competition is the bedrock of America, and it’s time that education reaches the market economy,” Hastert asserted, prompting nods of agreement from his co-panelists. “It come down to a core American value: equal opportunity,” Medved added. “Conservatives don’t believe in equal outcomes. But from the time of founding, part of what this country is about is everybody gets a shot. That’s what we’re affirming here tonight,” he said. Morris suggested that by injecting greater competition into the system, individual schools and districts could serve as educational laboratories. “We’ve tried testing, standards, and funding increases. The only remaining option is opening up the status quo to experiments,” he said, arguing that outcomes should dictate future priorities. “Let’s find out what works, and let the money go with the kids. At that point, when people ask which schools to close, the answer is the empty ones.”

During the wide-ranging discussion, the panel explored a number of potential experimental programs, from inner city public boarding schools, to significantly shortening summer break, to reinstituting trade schools as a viable and respected option for students.

“We have this idea in the US that every child is the same. We also have this idea that every single American child should go to college. That’s not a good idea. College prep work sets up a huge number of children for guaranteed failure. It’s perfectly possible to make a great living and be a wonderful citizen without being a college prep student,” Medved said.

The applause turned to boos and jeers at any mention of teacher’s unions -- although panelists were quick to draw a distinction between what they called the corrupt practices of unions and individual teachers. At one point, public school teachers in the crowd were asked to raise their hands. They were greeted with a prolonged ovation. “Good teachers transform lives, but not every teacher is equal, unless you’re talking to the unions,” Morris said, echoing a sentiment featured in a short film trailer that played during the event.

Medved added a word of caution: “Let’s not just make the teacher’s unions the big bad enemy,” he implored the audience, citing his own mother’s publicly-funded health benefits that helped her afford medical treatment after suffering a stroke. “Teachers making a respectable living and receiving good benefits is not something to oppose. If we do, we’ll lose that argument. The problem is the corruption of unions who protect the worst teachers who have no business being in a classroom. We are not on the side of bad, lazy teachers,” he said.

Each speaker praised innovative steps that have already been taken by some jurisdictions, including tying driver’s licenses to school attendance for teens. Ultimately, though, government policies can only go so far, Hastert contended. “It’s not just money or policy that leads to success. Parents need to care. Then, teachers will care because parents care. We can’t legislate that, but we should encourage it,” he said. “Home schooling is the epitome of that idea, and the people involved in that movement are very vocal. I take my hat off to them.”

Many of the audience questions dealt with breaking the disproportionate strength of the unions, which led to an extended discussion of Governor Chris Christie’s ongoing battle with the New Jersey Education Association. “Christie has started to do what people say can’t be done. He is changing the psyche of the public. But for us to do here [in Illinois] what he’s doing out in New Jersey, we need a different governor,” he said to loud applause. Democrat Pat Quinn was elected to his first full term as Governor of Illinois in November.