GOP Running Up the Score In Big Ten Country 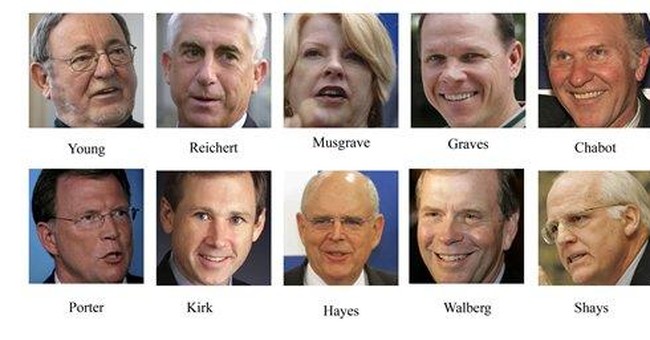 College football season is well underway, and fan forums are already abuzz with a litany of heated debates: Which is the strongest BCS conference?  Should the NCAA institute a playoff system to determine the national champion? Is major conference expansion over?  For those who prefer politics to pigskin, the more salient questions focus on the balance of power in Washington, DC and statehouses across the US.  Will Republicans win back the House?  What are the odds the Senate changes hands?  Could Democrats squander their advantage in governorships?

The answers to these questions will ultimately be determined by voters on November 2nd.  As political judgment day approaches, one factor appears increasingly clear:  For Republicans pull off a clean sweep in all three categories, they will need to run up the score in regions of the country that have been inhospitable to the GOP brand in recent election cycles.  Which brings us to Big Ten Country.

The Big Ten conference is a tradition-rich league and is home to some of the most storied collegiate football programs of all time: Michigan, Ohio State, Penn State (and soon, Nebraska).  Geographically, ‘Big Ten Country’ occupies a large swath of Middle America, including much of the rust belt—which has trended heavily Democratic in recent elections.  In 2008, for instance, all eight states voted for Barack Obama over John McCain, including the perennial Republican stronghold of Indiana.  Since President Obama took office, however, the rust belt’s economy has been battered to a pulp   The GOP is now poised for a possibly dominant election night performance in the land of “three yards and a cloud of dust.”  If, on November 2nd, Republicans can effectively exploit their Midwestern moment, they face a real shot at running up the score by such a wide margin that Democrats may struggle to make up the difference elsewhere.

Here’s a state-by-state breakdown of the midterm election picture within the Big Ten footprint:

Senate: Barack Obama’s old Senate seat is no longer up for sale, but it is up for grabs.  Democrats have nominated a young failed mob banker named Alexi Giannoulias to defend the seat, while Republicans selected moderate Navy veteran Mark Kirk to try to pick it off.  Both candidates have significant flaws, but one will emerge victorious—right now, Kirk appears to have a narrow edge.  If Republicans want to win back the Senate in 2010, this race is a must-have.

House: There are five hotly contested House races in the Prairie State, four of which feature Democratic incumbents.  Recent polls have shown Democrats Debbie Halvorson of IL-11 (challenged by a dynamic young Air Force pilot, Adam Kinzinger), Bill Foster of IL-14 (opposed by well-respected State Senator Randy Hultgren), and Phil Hare of IL-17 (who’s being attacked by Republican restaurateur Bobby Schilling for his infamous on-camera admission that he “didn’t care” about the constitutionality of Obamacare) all in hot water.  Melissa Bean in IL-08 appears to be on more solid footing for re-election, but could get caught up in the undertow in a wave election.  If it’s a tsunami election, IL-09’s Jan Schakowski could also fall victim, considering the strength of her opponent, Joel Pollack.  The only potential Democratic pick-up is in IL-10, Mark Kirk’s vacant seat.  Polls show a dogfight between two-time Democratic loser Dan Seals, who hasn’t held a fulltime job in five years, and Republican small businessman, Robert Dold.

Governor: No 2010 election, although it’s worth noting that popular GOP Governor Mitch Daniels was re-elected by 18 points on the same night Barack Obama pulled off a shocker in the Hoosier state.  Daniels cleaned up in nearly every demographic, including young voters, and ran 14 points ahead of John McCain among Hispanics.

Senate: When incumbent Evan Bayh (D) announced his retirement, citing disgust with the climate in Washington, this race immediately changed complexion, shifting from a fairly safe Democratic seat to a near-certain Republican pick-up in the blink of an eye.  Faux “moderate Democrat” Brad Ellsworth is trying desperately to distract voters from his “yes” votes on Obamacare and the stimulus, but his flim-flammery doesn’t appear to be working.  Former Republican Senator Dan Coats will soon become current Republican Senator Dan Coats.

House: Three House seats are vulnerable in Indiana, all of which are currently held by Democrats.  In IN-02, Joe Donnelly is engaged in an Ellsworthesque song and dance routine, touting his supposed moderation in campaign ads that could easily be mistaken for NRCC spots.  GOP challenger Jackie Walorski is inviting voters to choose the actual Republican, rather than the “born-again Conservative” poseur.  With Brad Ellsworth running for higher office, his IN-08 seat is ripe for the picking, and Medical Doctor Larry Buschon appears ready to pluck the seat back into Republican hands.  Over in IN-09, Rep. Baron Hill (D) is fighting for his political life against political newcomer Todd Young in a district carried by President Bush in 2004 and John McCain in 2008.

Projection: With voter anger Boiling Up, Republicans will net a Senate seat and two House seats—and will fight the urge to ask Indiana Democrats, “Hoosier Daddy?”

Governor: Former Governor Terry Branstad (R) wants his old job back from embattled Democratic incumbent Chet Culver.  Culver’s approval rating hovers in the 30s, as Iowans have not taken kindly to his social liberalism and tax increases. Barring a major game changer, Branstad will get his wish and return to the Governor’s mansion after a 12-year hiatus.

Senate: Republican incumbent Chuck Grassley will hold this seat in a laugher over former US Attorney Roxanne Conlin.  “Who,” you may ask?  Exactly.

House: Polls show single-digit margins in three Iowa House contests, each of which appear to be “lean Democrat” seats that could flip.  Young family man Ben Lange sits within striking distance of Democrat Bruce Braley in IA-01, but remains the underdog.  Down the road in IA-02, Republican Mariannette Miller-Meeks has pulled to within one point of incumbent Dave Loebsack, who will partially depend on strong youth support from Iowa City to secure re-election.  Conflicting polls in IA-03 spell a toss-up between Democratic incumbent Leonard Boswell and challenger Brad Zaun, who’s trumpeting a poll that puts him ahead by ten points, while staying mum on another that says he’s trailing by a similar margin.  Iowa insiders say Boswell’s seat is the likeliest pick-up (he’s getting hammered on Cap and Trade), but believe all three races are winnable.  One well-placed source notes that zero Democratic polls have been publicly released in any of the three districts, which may indicate Iowa Dems are keeping some ugly internal numbers to themselves.

Projection: Even if you confine Iowa Republicans to a pink locker room, they’ll still net the Governorship, hold a Senate seat, and perhaps pick off a House seat or two.

Governor: Michigan’s Governorship is open following the cataclysmic tenure of Jennifer Granholm, who prepares to leave office with a 61% job disapproval rating.  Republican Rick Snyder, the former CEO of Gateway, is salivating at the opportunity to replace her—and leads Lansing Mayor Virg Bernero (D) by, well, 8 Miles.  Michigan will have its first Republican Governor since 2002.

House: Infamous “Blue Dog” Democrat Bart Stupak activated his political ejector seat after brokering an epic sellout on Obamacare, leaving MI-01 an open contest.  Dr. Dan Benishek, the Republican, leads by double digits.  Former Congressman Tim Walberg (R) is well positioned to win back his old seat in MI-07*, comfortably leading Democratic incumbent Mark Schauer (who ousted him in 2008).  The district is a major political barometer; it was carried narrowly by George W. Bush in 2004, and Barack Obama in 2008.  Over in MI-09 Democratic Congressman Gary Peters is in danger of losing his seat to Republican challenger Rocky Raczkowski, a successful businessman and military veteran.  The race is nip-and-tuck, with one recent poll showing Raczkowski slightly ahead.

Projection:  Go Blue?  Not this year.  A red tide will consume the banks of the Red Cedar and beyond, netting Republicans the Governor’s mansion, and three House seats.

PART II of this feature, including Minnesota, Nebraska, Ohio, Pennsylvania, and Wisconsin will be available tomorrow.

Editors' note: the district where Tim Walberg is running against Mark Schauer was originally noted as being Michigan's 2nd district. Their race is in Michigan's 7th district.