The Curious Case of Rod Blagojevich: A Review 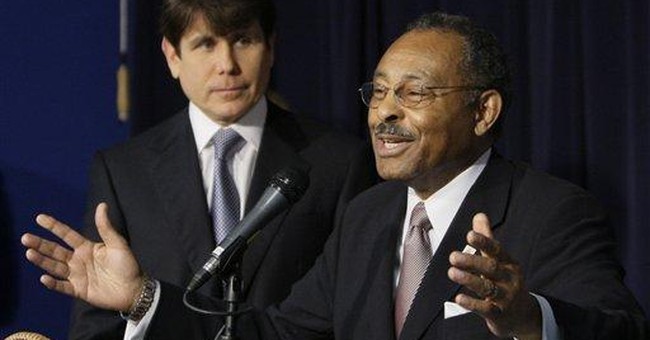 As far as bizarre, borderline-surreal political theater goes, this critic gives two enthusiastic thumbs-up to last week's hilarious press conference starring disgraced Illinois Governor Rod Blagojevich, his appointment to the US Senate, Roland Burris, and various supporting characters. Set in Chicago, this "dramedy" was a smash hit with most audiences, despite testing poorly with some Congressional leaders and the quasi-fictional "Office of the President Elect."

Blagojevich appeared to relish his role in this masterpiece, appearing to delight in jarring this wacky train right off the predictable tracks of a standard political announcement. His opening salvo featured an unexpected appeal to certain targeted demographic audiences in which he extended holiday wishes in both English and Spanish. A "Feliz Navidad" in the first ten seconds? Pure gold. Before the audience could fully process this epic pander, Blago dazzled them again, turning conventional wisdom on its head by referring to his high-profile arrest and cratering public support as life in "the limelight," which he insisted he's thoroughly enjoyed. Three cheers for this visionary courage to discard the tired politico-drama cliché of fake contrition.

The wonders continued. Summoning laudable levels of cognitive dissonance, Blagojevich introduced his co-star (Burris) as a "good and honest man" of "unquestioned integrity." These lines were delivered so convincingly that one could be forgiven for momentarily ignoring Blagojevich's utter incapacity to recognize or appreciate any of the qualities he ascribed to Burris. Pivoting cleanly from the blockbuster announcement, Blago injected subtlety and depth to his performance by coolly citing the rule of law to justify his actions—without the slightest discernible trace of irony. Bravo.

Alas, it then was time to cede the spot/lime-light, albeit temporarily, to Burris. Though the former state comptroller, Illinois attorney general, and failed Gubernatorial/Senatorial/Mayoral candidate's performance was insufficiently nuanced to upstage the leading man, he certainly proved himself a serviceable supporting character. Burris began his portion of the program by rattling off some talking points about the great people of the great state of Illinois deserving and demanding full representation in Washington, DC. Luckily for the great people of his great state, Burris selflessly (heroically?) offered himself up as the public servant prepared to fill that void.

Burris' performance was nonetheless mixed. While his feigned ignorance regarding alleged past donations to Blagojevich was fairly impressive, his "I-sort-of-realize-this-situation-is-preposterous" smirk betrayed some underlying sense of propriety that was distractingly incongruous with the rest of the production. Also, he presided over the Q&A scene like a schoolchild doing his best impression of how he imagined adults might interact with the press. He would have benefited immensely from some expert direction on this front. ("Just cut them off and say, 'don't waste your question,' then move on"). Speaking of the press, the Chicago media did an exceptional job of roping Blagojevich back into the fray, despite his original intention to avoid questions. Audiences were undoubtedly grateful for the chance to see this master once again in his element. Who knew Blagojevich could so effortlessly transition into improv?

Just when you thought the plot had reached its climax and the credits were about to roll, an extended cameo by Congressman Bobby Rush (D-IL) stole the show. Rush's exquisite portrayal of an aging machine politician clinging to the last vestiges of his favored brand of racial politics was matched only by the unexpected nature of his appearance. Without forewarning, Rush meandered to the podium from the back of the room, compelled to speak on behalf of his embattled friend, Burris. He lit up the screen by casting opponents of Burris' appointment to the US Senate as a lynch mob—a bold choice, even for Rush. His subsequent challenge to the entire Senate, daring any member to obstruct Burris' path to the Upper Chamber, added another dramatic wrinkle to the plot while inviting the potential for even more characters to join the fracas before all is said and done.

Fortunately for fans of the first installment, Rush's challenge and Blagojevich's intractability heavily indicate that an undetermined number of sequels are already in the works. Blagojevich's attorney agent has been fairly tight-lipped about his client's future plans (a rival studio, Fitzgerald Pictures, is also said to be pursuing the rising star), but audiences can rest assured that this series is far from over.

Is that laughter I hear...or the sweet sound of Oscar buzz? At the very least, this film deserves some consideration for Best Hair and Makeup.