Obama: Living in the Past on Iraq 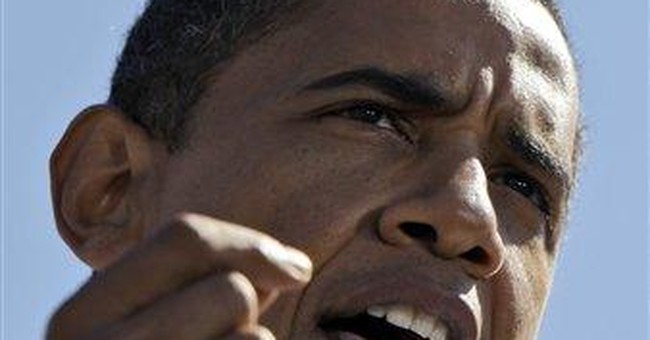 Barack Obama's lectures on Iraq are insufferable.  If you ask Obama, every social ill, international crisis, economic hardship, or spilt glass of milk is somehow traced back to a war that "should never have been authorized, and never been waged."  Compounding conservatives' frustration is the reality that John McCain never seems interested in defending America's original effort to topple the Hussein regime.  McCain's reluctance to do so is understandable to a point, considering the current unpopularity of that decision, but his unwillingness to expose Obama's credibility gap on the larger question is vexing.

The heroic sage mantle Obama has claimed on this issue is absurd.  He was neither courageous nor prescient on the war in Iraq.  When the war resolution passed Congress in 2002, Obama was a part-time state senator representing an overwhelmingly liberal, antiwar district.  It seems obvious that a man in his position condemning a controversial war initiated by a Republican administration was not even remotely a profile in political courage, his repeated self-congratulation about his “courage” notwithstanding.  Are we really to believe that a man whose local political career was launched at the home of an unrepentant leftist terrorist was really sticking his neck out in opposing the Iraq war?  It's remarkable Obama's managed to get away with this self-serving fairy tale for more than a year.

This storyline ultimately led Obama to publicly proclaim that opposing the war was the single most "gut-wrenching" decision he's ever made in his entire life.  If that's so, how is he remotely qualified for an office that demands far more difficult choices on a daily basis?  Apparently we're supposed to admire him for agonizing over whether to rhetorically condemn a Congressional war resolution on which he had absolutely no vote.  What bravery!  The notion that a community organizer-cum-local politician somehow had the geopolitical expertise to identify and reject the faulty intelligence that fooled Washington's best and brightest—including his running mate—is laughable.  But don't let common sense get in the way of a good narrative.  His pristine judgment is not to be questioned.

As he campaigns across the land seeking the presidency mere years after his valiant stand, Obama harshly criticizes "George Bush's war" at every opportunity.  When John McCain points out the obvious—that he's infinitely more knowledgeable about world affairs than a freshman Senator with no substantial accomplishments–Obama throws McCain’s Iraq war vote back in his face as if it's the ultimate trump card.  John McCain's judgment got us into this war, Obama intones, so why should Americans trust him?  McCain ought to return fire:

"Senator Obama is hopelessly stuck in the past on this issue.  It is no longer relevant whether his running mate, Joe Biden, Hillary Clinton, and dozens of Congressional Democrats exercised poor judgment by voting to liberate the people of Iraq.  That vote occurred way back when my opponent was showcasing his impeccable judgment in Chicago in dealing regularly with Tony Rezko, who's now a convicted felon.  This is the 2008 election, not the 2004 election.  Let's not fight years-old political battles while our troops are in harm's way, especially with victory within our grasp—no thanks to my opponent, by the way."

McCain is right to hammer away at the surge.  Unlike the original vote, over which Obama had zero influence, this issue offers a genuine apples-to-apples comparison.  Both McCain and Obama were members of the US Senate when the surge was proposed and voted upon.  McCain championed the strategy; Obama predicted it would not only fail, but would increase violence on the ground.  What a visionary.   This is a candidate who steadfastly refuses to admit he was wrong on the surge.  This is a candidate who selected a running mate who voted against the first Gulf War, in favor of the 2003 conflict, then against the spectacularly successful troop surge (in other words, 0-for-3 as far as prevailing conventional wisdom is concerned).  This is a candidate who, after wrongly forecasting a catastrophic failure of the surge, is now calling for the same basic strategy to quell violence in another country—while still denying it worked in Iraq. Yet, incredibly, this is a candidate who lectures John McCain about judgment.

On foreign policy, Obama is a one-trick pony.  At the tedious "townhall" debate in Nashville, he managed to turn his responses to nearly every foreign affairs question into a diatribe against the decision to authorize the war:

Q. Is it wise for a presidential candidate to publicly announce his intention to launch incursions into the sovereign territory of an ostensibly friendly nation like Pakistan?

A: Well, we wouldn't have to worry about Al Qaeda's leadership setting up shop in that mountainous region if we hadn't gotten "distracted" in Iraq.

Q: Should we send more US forces to Afghanistan?

A: Yes, especially once we get them out of Iraq, where we took our "eye off the ball."

Q: How should we deal with Iran's nuclear ambitions?

A: They must not be allowed to attain such weapons, but it's really too bad that their influence has increased considerably due to our reckless invasion of a neighboring country.

A: Cookies & Cream, which would taste even more delicious if we hadn't rushed to war in Iraq, thus straining our alliances all over the world.

Obama even squeezed in a shot at the Iraq war when answering a question about Russian aggression in Georgia.

To his credit, Tom Brokaw managed to pry Obama away from his thoroughly-flogged talking points on one fleeting occasion.  He asked what the “Obama Doctrine” might look like on the issue of US intervention designed to prevent or halt genocide abroad.  Obama replied, “When genocide is happening, when ethnic cleansing is happening …and we stand idly by, that diminishes us.”  He also cited America’s “moral obligation” to get involved in such situations.  This position is defensible and reasonable, but it doesn’t square with his previous words and actions on Iraq.  As Boston Globe columnist Jeff Jacoby points out, Obama himself said last July that preventing genocide in Iraq was not a sufficient reason to keep US troops in that country.  Evidently, he believes the war in Iraq is so uniquely terrible that the total withdrawal of our forces from that specific country trumps any possible human costs—not matter how grotesque.

Now is the time for John McCain to put an end to this nonsense about Obama’s supposed “judgment to lead.”