The Myth of Moral Neutrality 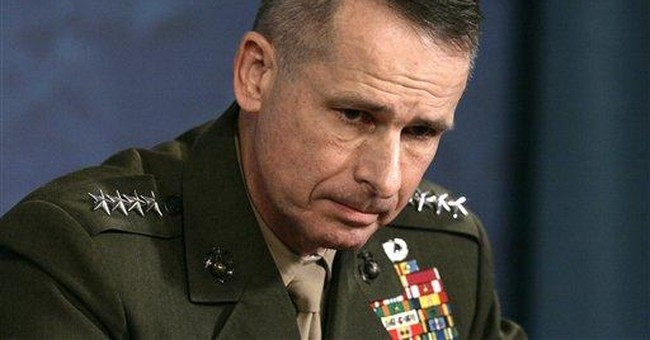 Gen. Peter Pace was vehemently denounced and condemned earlier this week for expressing a personal moral judgment that homosexuality is immoral. The criticisms excoriated Pace for making a value judgment, while implying that the denunciations themselves were morally neutral. In reality, Pace’s critics expressed a moral judgment, too. They declared his comments wrong, not just factually but morally – and their moral outrage was palpable.

Let me make this clear up front: All people regardless of their sexual orientation or other differences should be treated fairly. We all have equal intrinsic value and dignity. But the goal of gay rights advocates isn't so much to gain rights they are being denied as to gain societal approval. Thus the loud denunciations when Pace made a moral judgment. All the while, these advocates claim that that theirs is the neutral moral position. It isn't, and really can't be. But their objection conveys a fundamental assumption of many in our society today that one side of the public debate is "pushing its morality" on society, when in fact that is what the nature of their advocacy accomplishes.

This reflects one of the most entrenched assumptions of moral relativism in our society today: that there is such a thing as morally neutral ground, a place of complete impartiality where no judgments nor any forcing of personal views are allowed. Each of us takes a neutral posture towards the moral convictions of others. This is the essence of tolerance, or so the argument goes.

Moral neutrality, though, is a myth, as the following illustration shows.

One of the alleged virtues of relativism is its emphasis on tolerance. An extremely articulate example of this point of view was written by Faye Wattleton, the former President of Planned Parenthood. The piece is called, "Self-Definition: Morality."

Like most parents, I think that a sense of moral responsibility is one of the greatest gifts I can give my child. But teaching morality doesn't mean imposing my moral values on others. It means sharing wisdom, giving reasons for believing as I do--and then trusting others to think and judge for themselves.

My parents' morals were deeply rooted in religious conviction but tempered by tolerance--the essence of which is respect for other people's views. They taught me that reasonable people may differ on moral issues, and that fundamental respect for others is morality of the highest order.

"I have devoted my career to ensuring a world in which my daughter, Felicia, can inherit that legacy. I hope the tolerance and respect I show her as a parent is reinforced by the work she sees me doing every day: fighting for the right of all individuals to make their own moral decisions about childbearing.

Seventy-five years ago, Margaret Sanger founded Planned Parenthood to liberate individuals from the 'mighty engines of repression.' As she wrote, 'The men and women of America are demanding that...they be allowed to mold their lives, not at the arbitrary command of church or state but as their conscience and judgment may dictate.'

I'm proud to continue that struggle, to defend the rights of all people to their own beliefs. When others try to inflict their views on me, my daughter or anyone else, that's not morality: It's tyranny. It's unfair, and it's un-American.

This is impressively and persuasively written, one of the finest expressions of this view available in the space of five short paragraphs. It sounds so sensible, so reasonable, and so tolerant, but there's a fundamental flaw.

Faye Wattleton's assessment is based on the notion of neutral ground, a place that implies no moral judgment. Wattleton is not neutral, however, as her own comments demonstrate.

In her article, Wattleton in effect argues that each of us should respect another's point of view. She then implies, however, that any point of view other than this one is immoral, un-American, and tyrannous. If you disagree with Wattleton's position that all points of view are equally valid, then your point of view is not valid. Her argument commits suicide; it self-destructs*.

In fact, Wattleton has her own absolute she seeks to impose on other people: "Fundamental respect for others is morality of the highest order." This is a personal moral position she strives to mandate politically. She writes, "I have devoted my career to ensuring a world in which my daughter, Felicia, can inherit that legacy." What legacy? Her point of view. How does she ensure this? By passing laws. Faye Wattleton has devoted her career to ensuring a world in which her point of view is enforced by law.

I don't object to anyone seeking to use the political process to enforce his or her particular point of view in this way. In our system, everybody gets a voice, and everybody gets a vote. We each get to make our case in the public square, and may the best idea win. Because we each can vote, no one can inflict the majority with his point of view (unless, of course, he's a judge).

What is disturbing in Wattleton's article is her implication she is neutral, unbiased, and tolerant, when she is not. She is entitled to her point of view, but she's not neutral. The only place of true neutrality is silence. Speak up, give your opinion, contend for your view, and you forfeit your claim to neutrality.

As a case in point, in May, 1994, Congress passed a law making it a federal offense to block an abortion clinic**. Pamela Maraldo, then president of Planned Parenthood, commented to the press, "This law goes to show that no one can force their viewpoint on someone else." The self-contradiction of her statement is obvious: All laws force someone's viewpoint.

Moral neutrality seems virtuous, but there's no benefit, only danger. In our culture we don't stop at "sharing wisdom, giving reasons for believing as [we] do--and then trusting others to think and judge for themselves," as Wattleton says, nor should we. This leads to anarchy. Instead we use moral reasoning, public advocacy, and legislation to encourage virtue and discourage dangerous or morally inappropriate behavior.

Faye Wattleton is offering an ethic which, although it sounds fair and tolerant, turns out to be the most bankrupt of all moral systems. It's called moral relativism. It's not even tolerant, as Ms. Wattleton makes clear when she condemns those who disagree with her. It sounds persuasive, but it's also misleading and fallacious.

It’s important to have an informed and civil public dialogue about public policy, and homosexual rights is a delicate subject made more difficult when one side is accused of moral judgment. Both sides are making moral judgments; it’s the nature of the issue. The question we should be discussing is which moral judgment makes the best public policy? It’s not possible to be morally neutral so it would be much more productive if everyone owned up to their moral values.

*I wonder if she takes this approach with her daughter. Does she "inflict" Felicia with moral obligations about bedtimes, homework, drugs, cheating, etc., or is she "tolerant" of Felicia's divergent opinions on these issues?