The Confusing Moral Logic of ESCR 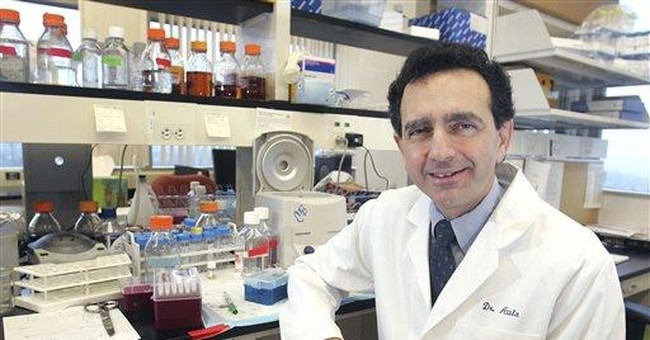 The embryonic stem cell research debate is remarkable because neither side—pro-life nor pro-abortion—seems to fully understand the moral logic of its views.

Presumably, people who are pro-life hold their views for a reason and are not just emoting or idealogues. The same could be said of pro-choicers. I’ve long suspected that’s not always the case, though. The recent debate about embryonic stem cell research (ESCR) confirms my doubts.

ESCR is an amazing effort on the leading edge of medical science that some suggest offers promise of effective treatment for Alzheimer’s, diabetes, Parkinson’s, and a host of other tragic and debilitating diseases. Human embryos in the first two weeks of gestation are comprised entirely of unique stem cells that have the remarkable ability of transforming into a wide variety of spare cellular parts.

There’s a limited supply of these embryos currently available that are destined for the trash can: the frozen remnants of over-ambitious in vitro fertilization (IVF) attempts. Though ESCR destroys these living human zygotes, in the minds of many this research is ethically permissible. “The embryos are going to die anyway. Why not make good use of them?”

Two questions in this debate need to be carefully considered and not dismissed with name calling, histrionics, or political posturing. First, is it reasonable to expect that the scientific community can fulfill its buoyant (and as yet thoroughly unsubstantiated) claims of future medical miracles from embryonic cells? Second, even if ESCR proponents’ wildest dreams were realized, is research on human embryos right?

I’m concerned here with the second question. Is it justified to take the life of some human beings to bring benefit to others?

The ESCR debate of the moral question is remarkable to me for two reasons. First, how could those who are pro-abortion feel the need to defend the act of cutting up a human embryo to farm it for its cells? Second, how could those who are pro-life countenance the thought? The answer to both is the same: To a large degree, neither side seems to understand the moral logic of its views.

An action is unethical when it violates a moral rule. Car theft is wrong because it violates a larger principle: It’s wrong to steal another’s property. That same rule has other applications, however. The moral principle covering car theft equally covers plagiarism. If someone objects to car theft, but condones her own theft of another’s ideas, it’s fair to question her commitment to the broader principle: Stealing is wrong. It begins to look like emotions and personal preferences are driving her choices, not moral thinking.

The moral logic pertaining to any pre-born human life can be stated simply. It’s wrong to kill innocent human beings. Both abortion and ESCR kill innocent human beings. Therefore, both abortion and ESCR are wrong. Pro-lifers, presumably, affirm this moral equation. Pro-choicers, by and large, deny it because of the second premise. To them, no bona fide human being is sacrificed, just a “blob of cells.” (That everyone is just a blob of cells seems to have escaped their notice).

Only one question needs to be answered to resolve what many think is a complex moral problem. That question is, “What is it?” Both abortion and ESCR kill something that is alive. In fact, both destroy the same thing at different stages of development. Whether it’s right or not to take that life depends entirely on what it is we’re killing.

Here’s why. We do not justify harming any other human beings for the reasons people routinely give for abortion. And we don’t carve up innocent human beings on the hope that it might benefit someone else who is sick.

The pro-life view stands or falls on this moral equation. So does the pro-choice view, it seems to me, which makes the conduct of many on both sides confusing.

If abortion itself is morally acceptable—if it’s legitimate to destroy fully-formed human children right up to the point of birth (and even during delivery, in the case of partial-birth abortion)—why would anyone flinch at the idea of carving up a week-old embryo? Why the compulsion to defend destroying a lump of cells the size of a pinhead for medical benefit when it’s completely legal and acceptable to destroy a fully-formed human fetus for any reason what so ever?

Equally incomprehensible to me, a stunning number of pro-lifers have rallied in support of ESCR for the very same reasons pro-choicers classically have justified abortion: It doesn’t look human; it’s in the wrong location (a petri dish, not a uterus); it’s too small to be of moral consequence; it’s alive, but not a life; it’s human, but not a human being; it’s a human being, but not a person; others will gain tremendous benefit.

When pro-lifers embrace a pro-choice rationale in support of ESCR, they undermine their entire moral enterprise.

Click to read "The Confusing Moral Logic of ESCR: Part II or III"