A Cure for Character 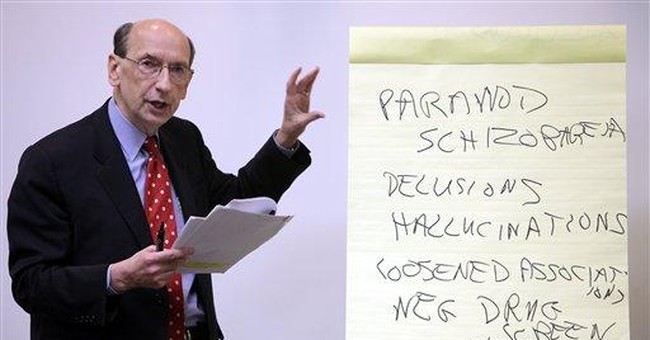 WASHINGTON -- Peter De Vries, America's wittiest novelist, died 17 years ago but his discernment of this country's cultural foibles still amazes. In a 1983 novel, he spotted the tendency of America's therapeutic culture to medicalize character flaws:

"Once terms like identity doubts and midlife crisis become current," De Vries wrote, "the reported cases of them increase by leaps and bounds." And: "Rapid-fire means of communication have brought psychic dilapidation within the reach of the most provincial backwaters, so that large metropolitan centers and educated circles need no longer consider it their exclusive property, nor preen themselves on their special malaises."

Life is about to imitate De Vries' literature, again. The fourth edition of the Diagnostic and Statistical Manual of Mental Disorders (DSM), psychiatry's encyclopedia of supposed mental "disorders," is being revised. The 16 years since the last revision evidently were prolific in producing new afflictions. The revision may aggravate the confusion of moral categories.

If every character blemish or emotional turbulence is a "disorder" akin to a physical disability, legal accommodations are mandatory. Under federal law, "disabilities" include any "mental impairment that substantially limits one or more major life activities"; "mental impairments" include "emotional or mental illness." So there might be a legal entitlement to be a jerk. (See above, "antisocial personality disorder.")

The revised DSM reportedly may include "binge eating disorder" and "hypersexual disorder" ("a great deal of time" devoted to "sexual fantasies and urges" and "planning for and engaging in sexual behavior"). Concerning children, there might be "temper dysregulation disorder with dysphoria."

This last categorization illustrates the serious stakes in the categorization of behaviors. Extremely irritable or aggressive children are frequently diagnosed as bipolar and treated with powerful antipsychotic drugs. This can be a damaging mistake if behavioral modification treatment can mitigate the problem.

Another danger is that childhood eccentricities, sometimes inextricable from creativity, might be labeled "disorders" to be "cured." If 7-year-old Mozart tried composing his concertos today, he might be diagnosed with attention-deficit hyperactivity disorder and medicated into barren normality.

Furthermore, intellectual chaos can result from medicalizing the assessment of character. Today's therapeutic ethos, which celebrates curing and disparages judging, expresses the liberal disposition to assume that crime and other problematic behaviors reflect social or biological causation. While this absolves the individual of responsibility, it also strips the individual of personhood, and moral dignity.

James Q. Wilson, America's pre-eminent social scientist, has noted how "abuse excuse" threatens the legal system and society's moral equilibrium. Writing in National Affairs quarterly ("The Future of Blame"), Wilson notes that genetics and neuroscience seem to suggest that self-control is more attenuated -- perhaps to the vanishing point -- than our legal and ethical traditions assume.

The part of the brain that stimulates anger and aggression is larger in men than in women, and the part that restrains anger is smaller in men than in women. "Men," Wilson writes, "by no choice of their own, are far more prone to violence and far less capable of self-restraint than women." That does not, however, absolve violent men of blame. As Wilson says, biology and environment interact. And the social environment includes moral assumptions, sometimes codified in law, concerning expectations about our duty to desire what we ought to desire.

It is scientifically sensible to say that all behavior is in some sense caused. But a society that thinks scientific determinism renders personal responsibility a chimera must consider it absurd not only to condemn depravity but also to praise nobility. Such moral derangement can flow from exaggerated notions of what science teaches, or can teach, about the biological and environmental roots of behavior.

Or -- revisers of the DSM, please note -- confusion can flow from the notion that normality is always obvious and normative, meaning preferable. And the notion that deviations from it should be considered "disorders" to be "cured" rather than stigmatized as offenses against valid moral norms.