Congress Out of Its League on BCS 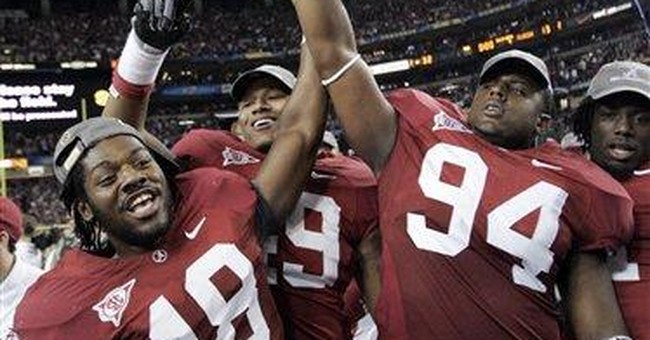 WASHINGTON -- Two Saturdays ago, the nation was one tick of a Texas clock away from a cultural crisis. Nebraska led Texas 12-10 in the Big 12 Conference championship football game in Cowboys Stadium in Arlington. Texas had the ball on Nebraska's 29-yard line when time expired. Or so it seemed.

Texas was unbeaten entering the game and was third in the Bowl Championship Series ranking. But that Saturday, Alabama, which was ranked second, defeated top-ranked Florida. Because, however, 3,600 seconds had elapsed in Arlington, a defeated Texas would not be playing Alabama Jan. 7 in the BCS game to determine the national champion.

But Texas was resuscitated by football's excruciating mania for perfection. A game is 60 minutes of actual football sliced into slivers and scattered among almost that many minutes of officials standing around brooding about whether they called the last play correctly.

A replay official in Cowboys Stadium consulted videotape and decided that when the previous play ended, only 3,599 seconds of the game had elapsed. So one second was put back on the clock, Texas kicked a field goal and will play Alabama after all. And the nation will be spared the culture shock of seeing one of three other teams -- Texas Christian, Cincinnati or Boise State -- play Alabama. These upstarts are undefeated, which is admirable, but they also are unglamorous, which is unforgivable: It might mean fewer television viewers for the beer and pickup truck commercials that will be broadcast during replay delays on the Jan. 7 telecast.

Rep. Joe Barton, who considers the BCS part of the axis of evil, is incandescent, and prepared. Last January, this 13-term Republican, whose district includes Cowboys Stadium and nearly nuzzles TCU in Fort Worth, introduced the College Football Playoff Act of 2009, which says: It shall be unlawful to "promote, market, or advertise" a postseason Division I football game as a national championship game unless it is "the final game of a single elimination post-season playoff system" for which all Division I teams are, at the beginning of the season, equally eligible.

Barton believes in limited government, but not so limited that it cannot right outrageous wrongs, such as the absence of a playoff.

Bipartisanship lives: Barack Obama, who wants to fix everything -- health care, the climate, the pothole on your street, college football -- also wants a playoff.

"They keep trying to tinker with the current system," Barton says, "and to me it's like -- and I don't mean this directly -- it's like communism. You can't fix it." He would toss the BCS into the ashcan of history where, arguably, it belongs. "It is," he says, "simply a cartel, much like OPEC." It uses an "arbitrary computer system" and "complicated algorithms" to determine who gets to play in the "mythical championship game." He has a point.

January's game will be the 12th since the BCS system was created in 1998, and Alabama will be just the 12th different university represented in the decisive game. (Texas won it in 2006.) By giving the winners of six major football conferences automatic bids to one of the four most lucrative bowl games (Rose, Fiesta, Sugar, Orange) plus the national championship game, the BCS virtually guarantees that the rich get richer -- and get the television exposure that attracts blue-chip recruits.

Occasionally a declasse team crashes the BCS party: Undefeated Utah was allowed into the 2005 Fiesta Bowl. Then Utah lost its coach, Urban Meyer, to Florida, a school in the Southeastern Conference, whose winner always plays in a BCS bowl.

If congressional pressure leads to, say, a four-team playoff, half a dozen other teams will call that "arbitrary" and will pressure Congress to press for an eight-team playoff. Eventually the season will end when spring practice begins.

The BCS has effectively created a two-tier bowl system -- the big four bowls plus the national championship game, with their gigantic television contracts, and the 29 much less profitable bowls -- which is unfair. It also is none of Congress' business.

Barton's bill makes the usual perfunctory nod to the Constitution, finding that college teams travel in interstate commerce, and college games "involve and affect" such commerce and therefore -- the usual non sequitur -- it is fine for Congress to meddle.

Barton's bill, which should draw a 15-yard penalty for unnecessary roughness to the idea of limited government, demonstrates how Congress' power to regulate interstate commerce has become an end run around that idea.