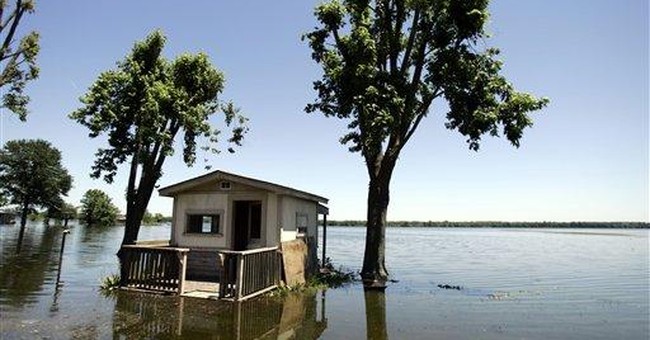 WASHINGTON -- With 20,000 delegates, advocates and journalists jetting to Copenhagen for planet Earth's last chance, the carbon footprint of the global warming summit will be the only impressive consequence of the climate change meeting. Its organizers had hoped it would produce binding caps on emissions, global taxation to redistribute trillions of dollars, and micromanagement of everyone's choices.

China, nimble at the politics of pretending that is characteristic of climate change theater, promises only to reduce its "carbon intensity" -- carbon emissions per unit of production. So China's emissions will rise.

Barack Obama, understanding the histrionics required in climate change debates, promises that U.S. emissions in 2050 will be 83 percent below 2005 levels. If so, 2050 emissions will equal those in 1910, when there were 92 million Americans. But there will be 420 million in 2050, so Obama's promise means that per capita emissions then will be about what they were in 1875. That. Will. Not. Happen.

Disclosure of e-mails and documents from the Climate Research Unit in Britain -- a collaborator with the U.N.'s Intergovernmental Panel on Climate Change -- reveals some scientists' willingness to suppress or massage data and rig the peer review process and the publication of scholarly work. The CRU materials also reveal paranoia on the part of scientists who believe that in trying to engineer "consensus" and alarm about warming, they are a brave and embattled minority. Actually, never in peacetime history has the government-media-academic complex been in such sustained propagandistic lockstep about any subject.

The Washington Post learns an odd lesson from the CRU materials: "Climate scientists should not let themselves be goaded by the irresponsibility of the deniers into overstating the certainties of complex science or, worse, censoring discussion of them." These scientists overstated and censored because they were "goaded" by skepticism?

Were their science as unassailable as they insist it is, and were the consensus as broad as they say it is, and were they as brave as they claim to be, they would not be "goaded" into intellectual corruption. Nor would they meretriciously bandy the word "deniers" to disparage skepticism that shocks communicants in the faith-based global warming community.

Skeptics about the shrill certitudes concerning catastrophic manmade warming are skeptical because climate change is constant: From millennia before the Medieval Warm Period (800 to 1300), through the Little Ice Age (1500 to 1850), and for millennia hence, climate change is always a 100 percent certainty. Skeptics doubt that the scientists' models, which cannot explain the present, infallibly map the distant future.

The Financial Times' peculiar response to the CRU materials is: The scientific case for alarm about global warming "is growing more rather than less compelling." If so, then could anything make the case less compelling? A CRU e-mail says: "The fact is that we can't account for the lack of warming at the moment" -- this "moment" is in its second decade -- "and it is a travesty that we can't."

The travesty is the intellectual arrogance of the authors of climate change models partially based on the problematic practice of reconstructing long-term prior climate changes. On such models we are supposed to wager trillions of dollars -- and substantially diminished freedom.

Some climate scientists compound their delusions of intellectual adequacy with messiah complexes. They seem to suppose themselves a small clerisy entrusted with the most urgent truth ever discovered. On it, and hence on them, the planet's fate depends. So some of them consider it virtuous to embroider facts, exaggerate certitudes, suppress inconvenient data, and manipulate the peer review process to suppress scholarly dissent and, above all, to declare that the debate is over.

Consider the sociology of science, the push and pull of interests, incentives, appetites and passions. Governments' attempts to manipulate Earth's temperature now comprise one of the world's largest industries. Tens of billions of dollars are being dispensed, as by the U.S. Energy Department, which has suddenly become, in effect, a huge venture capital operation, speculating in green technologies. Political, commercial, academic and journalistic prestige and advancement can be contingent on not disrupting the (postulated) consensus that is propelling the gigantic and fabulously lucrative industry of combating global warming.

Copenhagen is the culmination of the post-Kyoto maneuvering by people determined to fix the world's climate by breaking the world's -- especially America's -- population to the saddle of ever-more-minute supervision by governments. But Copenhagen also is prologue for the 2010 climate change summit in Mexico City, which will be planet Earth's last chance, until the next one.