Out Stranger in Kabul 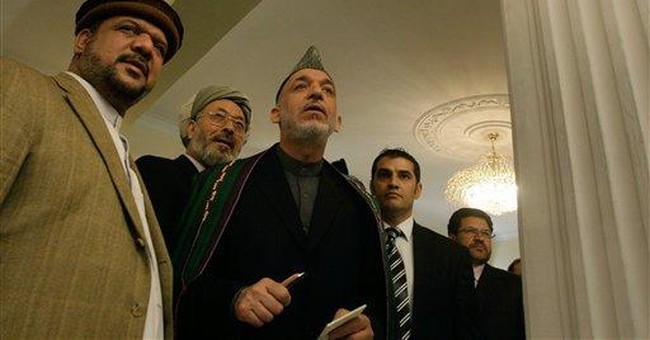 WASHINGTON -- Actress Cate Blanchett, who has played Queen Elizabeth I, is performing here, portraying someone less than regal -- flurried, anxious Blanche DuBois, in Tennessee Williams' "A Streetcar Named Desire." If Obama administration officials involved in formulating Afghanistan policy see her, they should wince when she speaks DuBois' signature line: "I have always depended on the kindness of strangers."

The U.S. mission -- whatever it is; stay tuned -- in that fractured semi-nation depends on substantially increased competence and radically reduced corruption among the strangers governing in, if not much beyond, Kabul. One stranger is Afghanistan's president. We are getting to know him well.

On Jan. 29, 2002, just 114 days after the U.S. intervention in Afghanistan, President George W. Bush, during his State of the Union address, introduced to a joint session of Congress and to a national television audience a man in the gallery of the House chamber -- "the distinguished interim leader of a liberated Afghanistan, Chairman Hamid Karzai." Interim no more, he has won -- or at least secured -- another five years in office. Abdullah Abdullah, whom Karzai defeated in Aug. 20's ruinous election -- fraudulent ballots, bogus polling places, one third of Karzai's votes disallowed -- has decided not to participate in a runoff, partly because it was to be conducted by those who supervised the first election. When it was reported that Abdullah was thinking about withdrawing, Secretary of State Hillary Clinton's response was inane: "We see that happen in our own country where, for whatever combination of reasons, one of the candidates decides not to go forward. I don't think it has anything to do with the legitimacy of the election." So, Afghanistan is just like America -- candidates decide "not to go forward."

After hearing that Abdullah would withdraw, Clinton said, "I do not think it affects the legitimacy. ... When President Karzai accepted (the runoff) without knowing what the consequences and outcome would be, that bestowed legitimacy from that moment forward." So, the U.S. government chooses to believe that legitimacy descends upon Karzai simply because he agreed to another election controlled by his operatives. Such desperate sophistry is dismaying evidence of the mentality of the Obama administration as it contemplates the military's request for a substantial increase of U.S. forces, just eight months after the last increase.

Remember the reason given for that one? In March President Obama increased U.S. forces in Afghanistan. In September he said: "I did order 21,000 additional troops there to make sure that we could secure the election, because I thought that was important." The election was indeed important.

Last Sunday, on "This Week," Valerie Jarrett, one of the president's confidants, was asked if Karzai's demolition of the process that was supposed to legitimize him will "cast a cloud over President Karzai and make it more difficult ... to implement (the president's) strategy." Jarrett replied:

"We don't think that it's going to add a complication to the strategy. ... We're going to work with the leader of the Afghan government and hopefully that's going to improve the state of conditions for the people in Afghanistan, and also help us as we try to bring this war to a close."

Hopefully? Talk about the audacity of hope. Jarrett perhaps signaled the goal that the president's strategy, which is a work in progress, is to serve -- bringing the war "to a close." Barack Obama has no intention of being a war president.

Already the annual cost of America's errand in Afghanistan is larger than that country's GDP. U.S. success depends on Afghans perceiving the central government as legitimate, which they will not do for at least five more years. Americans, led by a commander in chief whose heart is not in it, will not sustain the years of casualties and other costs necessary to create self-sufficient Afghan security forces beneath a corrupt regime.

On July 24, 2008, in Berlin, Obama stressed the need to "defeat the Taliban." Then, however, he spoke as a "citizen of the world," not as president. Now he is being presidential by reconsidering some implications of the politically calculated rhetoric that helped make him president. He is rightly ignoring those who cannot distinguish thinking from dithering.

President Woodrow Wilson, looking censoriously at some nations to America's south, reportedly vowed, "We will teach them to elect good men." Whatever strategy Obama adopts, its success cannot depend on America teaching Afghans to do that. If he is looking for a strategy that depends on legitimacy in Kabul, he is looking for a unicorn.