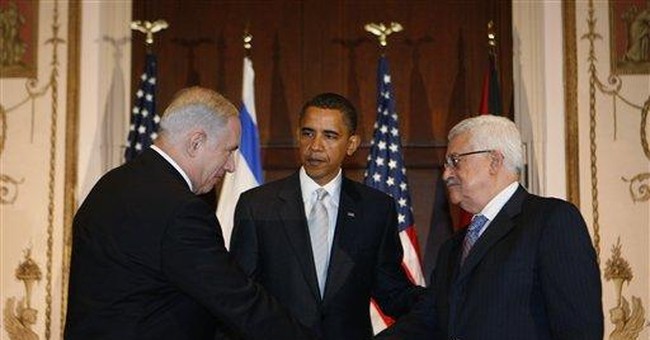 WASHINGTON -- While in Pittsburgh, a sense of seemliness should prevent President Barack Obama from again exhorting the G-20, as he did April 2 in London, to be strong in resisting domestic pressures for protectionism. This month, invertebrate as he invariably is when organized labor barks, he imposed 35 percent tariffs on imports of tires that China makes for the low-price end of the market. This antic nonsense matters not only because of trade disruptions it may cause, but also because it is evidence of his willowy weakness under pressure from his political patrons.

In 2000, as a price of China's admission to the World Trade Organization, Congress enacted a provision for "relief from market disruption" to American industries from surges of Chinese imports. Actually, American consumers cause "disruption" in American markets when their preferences change in response to progress -- better products and bargains. Never mind. Congress said disruption exists whenever imports of a product "like or directly competitive with" a U.S. product increase "rapidly" and threaten "significant" injury to a U.S. industry. Evidence of disruption includes the volume of imports of a particular product, the effect of imports on the prices of competing U.S. goods, and the effect on the U.S. industry.

Notice that China need not be guilty of any wrongdoing: It can be punished even if it is not "dumping" -- not selling goods below the cost of manufacturing and distributing them. (That we consider it wrongdoing for a nation to sell us things we want at very low prices is a superstition to be marveled at another day.) And China need not be punished: Presidential action is entirely discretionary. So Barack Obama was using the sort of slippery language that increasingly defines his loquacity when he said he was simply "enforcing" a trade agreement.

None of the 10 manufacturers who comprise the domestic tire industry sought this protectionism. Seven of the 10 also make tires in other countries. Most U.S. manufacturers have stopped making low-end tires, preferring the higher profit from more expensive models. (Four U.S. companies make low-end tires in China.)

The president smote China because a single union, the United Steelworkers, asked him to. It represents rubber workers, but only those responsible for 47 percent of U.S. tiremaking. The president's action will not create more than a negligible number of jobs, if any. It will not restore a significant number, if any, of the almost 5,200 jobs that were lost in the tire industry between 2004 and 2008. Rather, the president will create jobs in other nations (e.g., Mexico, Indonesia) that make low-end tires. They make them partly because some U.S. firms have outsourced the manufacturing of such tires to low-wage countries so the U.S. firms can make a small profit, while making high-end and higher-profit tires here in high-wage America.

The 215 percent increase in tire imports from China is largely the fault, so to speak, of lower-income Americans, many of whom will respond to the presidential increase in the cost of low-end tires by driving longer on their worn tires. How many injuries and deaths will this cause? How many jobs will it cost in tire replacement businesses, or among longshoremen who handle imports? We will find out. The costs of the president's sacrifice of the national interest to the economic illiteracy of a single labor union may also include injuries China might inflict by imposing retaliatory protectionism or reducing its purchases of U.S. government debt, purchases that enable Americans to consume more government services than they are willing to pay for.

Obama was silent when Congress, pleasing the Teamsters union, violated the North American Free Trade Agreement by stopping Mexican trucks from delivering goods north of the border. And although he is almost never silent about anything, he did not protest "Buy American" provisions in the stimulus legislation. And he has not denounced the idea many Democratic climate tinkerers have of imposing "border adjustment mechanisms" -- tariffs -- on imports from countries that choose not to burden their manufacturers, as the Obama administration proposes burdening American manufacturers, with restrictions on carbon emissions. And he allows unratified trade agreements with Colombia, South Korea and Panama to languish. Nevertheless, he says he favors free trade.

He must -- or so he thinks -- say so much about so many things, perhaps he cannot keep track of the multiplying contradictions in his endless utterances. But they -- and the tire tariffs -- are related to the sagging support for his health care program.