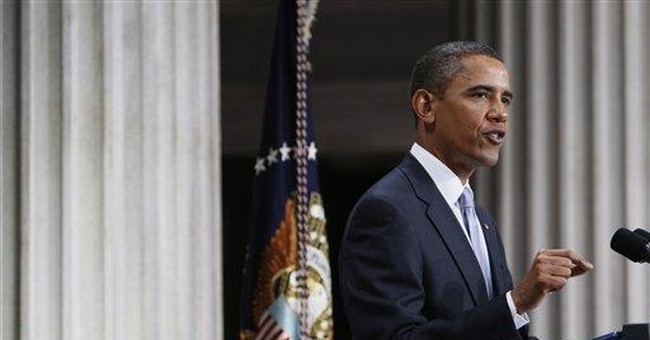 WASHINGTON -- "This is just the beginning," said Yosi Sergant to participants in an Aug. 10 conference call that seems to have been organized by the National Endowment for the Arts and certainly was joined by a functionary from the White House Office of Public Engagement. The call was the beginning of the end of Sergant's short tenure as NEA flack -- he has been reassigned. The call also was the beginning of a small scandal that illuminates something gargantuan -- the Obama administration's incontinent lust to politicize everything.

Sergant's comments, made to many individuals and organizations from what is vaguely and cloyingly called "the arts community," continued: "This is the first telephone call of a brand-new conversation. We are just now learning how to really bring this community together to speak with the government." Wrong preposition. Not "with" the government, but for the government.

Did the White House initiate the conference call-cum-political pep rally? Or, even worse, did the NEA, an independent agency, spontaneously politicize itself? Something that reads awfully like an invitation went from Sergant's NEA e-mail address to a cohort of "artists, producers, promoters, organizers, influencers, marketers, tastemakers, leaders or just plain cool people."

They were exhorted to participate in a conference call "to help lay a new foundation for growth, focusing on core areas of the recovery agenda." The first core area mentioned was "health care."

The NEA is the nation's largest single source of financial support for the arts, and its grants often prompt supplemental private donations. He who pays the piper does indeed call the tune, and in the four months before the conference call, 16 of the participating organizations received a total of nearly $2 million from the NEA. Two days after the call, the 16 and five other organizations issued a plea for the president's health care plan.

The automobile industry and much of the financial sector have been broken to the saddle of the state. Ninety percent of new mortgages and 80 percent of student loans -- the average family's two most important financial transactions -- are financed or guaranteed by the federal government. Now the Obama administration is tightening the cinch on subsidized artists, conscripting them into the crusade to further politicize the 17 percent of the economy that is health care.

Time was, artists were proudly adversarial regarding authority, the established order, etc. "Epater le bourgeois!" and all that. Now they are just another servile interest group seeking morsels from the federal banquet. Are they real artists? Sure, because in this egalitarian era, government reasons circularly: Art is whatever an artist says it is, and an artist is whoever produces art. So, being an artist is a self-validating vocation.

Advocates of government subsidies for "the arts" usually speak rhetorical cotton candy, sugary air about how art is a Good Thing, therefore public spending on it is a Good Deed. (Try this: For the word "art," substitute "surfing" or "religion.") Government should not be subsidizing corn either, but at least it can say what corn is. For government today, "art" is a classification so capacious it does not classify.

Under the last Democratic administration, the NEA said art is ... almost everything. The NEA democratically decreed that "art includes the expressive behaviors of ordinary people," including "dinner-table arrangements." The head of the National Endowment for the Humanities believed: "Today the lives of ordinary American people have assumed a place beside volumes of European classics in the humanities."

Invoking a utilitarian principle -- the greatest self-esteem for the greatest number -- the two endowments effectively said: We hear America singing and everyone sings equally well. Napoleon advocated a society of careers open to talents. By subsidizing artists, broadly -- very broadly -- defined, government creates careers open to the untalented. It had better.

In 1980, Robert Hughes, who then was Time magazine's excellent art critic, dryly noted, "Every five years, the art schools of America alone produce as many graduates as there were people in Florence in the last quarter of the 15th century." Today, when arts graduates are still plentiful, the cheerful if loopy assumption is that art is like artichokes -- increase the financial demand, the supply will increase.

That assumption is right as rain regarding another commodity -- lobbyists. Which is what the portion of the "arts community," including the "just plain cool people," who participated in the conference call has become. But, then, lobbying is, Lord knows, "expressive behavior," and therefore it is ... art.