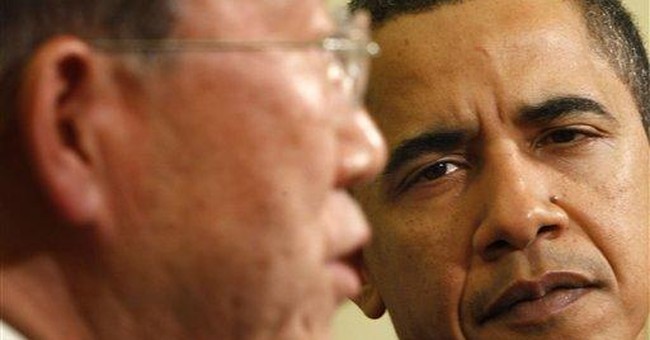 WASHINGTON -- Charles Dickens, who visited in 1842, described Washington as a "city of magnificent intentions" because of the incongruity between the city's grand aspirations and muddy, swampy actuality. Today Washington's discrepancy is not architectural but political. It is between the extraordinary powers and competences the administration claims it has, and the administration's inability to be clear or plausible about what it is doing.

Improvisation is understandable when confronting the unprecedented, but protracted improvisation precludes a prerequisite for recovery -- investors' certainty about the relationship between the government and the economy. One year ago this weekend, that relationship began changing when the Bush administration decided that Bear Stearns, the nation's fifth largest investment bank, was too big, or too connected -- too something -- to be allowed to fail. Seven months later, with the financial system frozen, Congress passed the Troubled Asset Relief Program, fresh proof that the titles of legislation, like the titles of Marx Brothers movies ("Duck Soup"; "Horse Feathers"), are uninformative about the contents.

Quicker than you can say "toxic assets," which TARP was supposedly designed to quarantine, TARP was subsidizing the manufacture of automobiles partially designed by Washington. Which recent government adventure in enterprise justifies such government confidence? Fannie Mae? Freddie Mac? Amtrak? Ethanol? The government has subsidized ethanol, protected it with tariffs, mandated levels of production and authorized 10 percent ethanol in gasoline blends, and now the shrinking ethanol industry wants government to authorize 15 percent.

Five months after enactment of TARP, a plan for unfreezing the credit system remains, like Atlantis, rumored but unseen. Twelve months after the government brokered the marriage of Bear Stearns and JPMorgan Chase, the government is recapitalizing financial institutions that the market has said should be shuttered. Lawrence H. White, economics professor at the University of Missouri, St. Louis, denies that financial institutions ever were "unregulated." Hitherto, such institutions were "regulated by profit and loss":

"The failure of Lehman Brothers and the near-failure of Merrill Lynch raised the interest rate at which profit-seeking lenders were willing to lend to highly leveraged investment banks. The market thereby forced Goldman Sachs and Morgan Stanley to change their business models drastically and to convert to commercial banks. If that isn't effective regulation, what is? Protecting firms from failure (Bear Stearns, AIG, Fannie Mae, Freddie Mac, Goldman Sachs, Citibank) and mitigating their losses with bailouts renders this most appropriate form of regulation much less effective."

The president's confidence in his capacities is undermining confidence in his judgment. His way of correcting what he called the Bush administration's "misplaced priorities" has been to have no priorities. Mature political leaders know that to govern is to choose -- to choose what to do and thereby to choose what cannot be done. The administration insists that it really does have a single priority: Everything depends on fixing the economy. But it also says that everything depends on everything: Economic revival requires enactment of the entire liberal wish list of recent decades.

The implausibility of this opportunistic hypothesis is deepened by Obama's rhetoric, which says "catastrophe" impends unless everything is done simultaneously. But his budget, in effect, says the danger will soon be gone and the new risk will be whiplash from the economy's sudden acceleration. Although only a small fraction of the supposedly countercyclical stimulus will be spent by the end of the year, the budget assumes that by then the economy will have perked up, and that it will grow robustly -- 3.2 percent, 4 percent and 4.6 percent -- in the next three years. Growth supposedly will cut the deficit in half -- growth and the $1.6 trillion "saved" by first assuming, and then "canceling," a 10-year continuation of the surge in Iraq. Why, one wonders, not "save" $5 trillion by proposing to spend that amount to cover the moon with yogurt, and then canceling the proposal?

The first president whose campaign was his qualification for office continues to campaign. And he is overexposed. His schedulers should remember what a contemporary said of Thomas Babington Macaulay, a prodigiously articulate but oppressively constant talker: "He has occasional flashes of silence that make his conversation perfectly delightful."

One afternoon last week, cable news viewers saw, at the top of their screens, the president launching yet another magnificent intention -- the disassembly and rearrangement of the 17 percent of the economy that is health care. The bottom of their screens showed the Dow plunging 281 points. Surely the top of the screen partially explained the bottom.