What Is It About August? 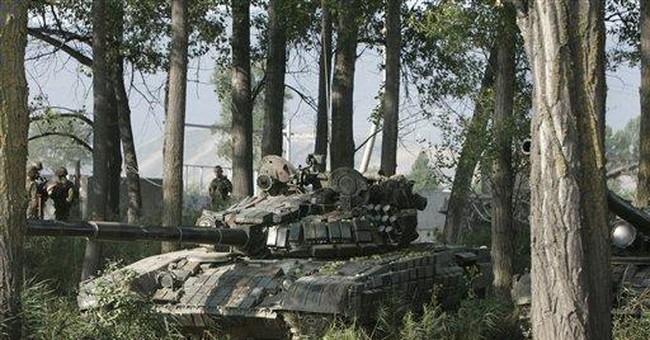 WASHINGTON -- Asked in 1957 what would determine his government's course, Harold Macmillan, Britain's new prime minister, replied, "Events, dear boy, events." Now, into America's trivializing presidential campaign, a pesky event has intruded -- a European war. Russian tanks, heavy artillery, strategic bombers, ballistic missiles and a naval blockade batter a European nation. We are not past such things after all. The end of history will be postponed, again.

Russia supports two provinces determined to secede from Georgia. Russia, with aspiring nations within its borders, generally opposes secessionists, as it did when America, which sometimes opposes secession (e.g., 1861-65), improvidently supported Kosovo's secession from Russia's ally Serbia. But Russia's aggression is really about the subordination of Georgia, a democratic, market-oriented U.S. ally. This is the recrudescence of Russia's dominance in what it calls the "near abroad." Ukraine, another nation guilty of being provocatively democratic near Russia, should tremble because there is not much America can do. It is a bystander at the bullying of an ally that might be about to undergo regime change.

Vladimir Putin, into whose soul President George W. Bush once peered and liked what he saw, has conspicuously conferred with Russia's military, thereby making his poodle, "President" Dmitry Medvedev, yet more risible. But big events reveal smallness, such as that of New Mexico's Gov. Bill Richardson.

On ABC's "This Week," Richardson, auditioning to be Barack Obama's running mate, disqualified himself. Clinging to the Obama campaign's talking points like a drunk to a lamppost, Richardson said this crisis proves the wisdom of Obama's zest for diplomacy, and that America should get the U.N. Security Council "to pass a strong resolution getting the Russians to show some restraint." Apparently Richardson was ambassador to the U.N. for 19 months without noticing that Russia has a Security Council veto.

This crisis illustrates, redundantly, the paralysis of the U.N. regarding major powers, hence regarding major events, and the fictitiousness of the European Union regarding foreign policy. Does this disturb Obama's serenity about the efficacy of diplomacy? Obama's second statement about the crisis, in which he tardily acknowledged Russia's invasion, underscored the folly of his first, which echoed the Bush administration's initial evenhandedness. "Now," said Obama, "is the time for Georgia and Russia to show restraint."

John McCain, the "life is real, life is earnest" candidate, says he has looked into Putin's eyes and seen "a K, a G and a B." But McCain owes the thug thanks, as does America's electorate. Putin has abruptly pulled the presidential campaign up from preoccupation with plumbing the shallows of John Edwards and wondering what "catharsis" is "owed" to disappointed Clintonites.

McCain, who has called upon Russia "to immediately and unconditionally ... withdraw all forces from sovereign Georgian territory," favors expelling Russia from the G-8, and organizing a league of democracies to act where the U.N. is impotent, which is whenever the subject is important. But Georgia, whose desire for NATO membership had U.S. support, is not in NATO because some prospective members of McCain's league of democracies, e.g. Germany, thought that starting membership talks with Georgia would complicate the project of propitiating Russia. NATO is scheduled to review the question of Georgia's membership in December. Where now do Obama and McCain stand?

If Georgia were in NATO, would NATO now be at war with Russia? More likely, Russia would not be in Georgia. Only once in NATO's 59 years has the territory of a member been invaded -- the British Falklands, by Argentina, in 1982.

What is it about August? The First World War began in August 1914. The Molotov-Ribbentrop pact effectively announced the Second World War in August 1939. Iraq, a fragment of the collapse of empires precipitated by August 1914, invaded Kuwait in August 1990.

This year's August upheaval coincides, probably not coincidentally, with the world's preoccupation with that charade of international comity, the Olympics. For only the third time in 72 years (Berlin 1936, Moscow 1980), the games are being hosted by a tyrannical regime, the mind of which was displayed in the opening ceremony featuring thousands of drummers, each face contorted with the same grotesquely frozen grin. It was a tableau of the miniaturization of the individual and the subordination of individuality to the collective. Not since the Nazi's 1934 Nuremberg rally, which Leni Riefenstahl turned into the film "Triumph of the Will," has tyranny been so brazenly tarted up as art.

A worldwide audience of billions swooned over the Beijing ceremony. Who remembers 1934? Or anything.

'No One F***s With a Biden': POTUS' Trip to Florida Goes As Expected
Townhall
Tweeter risks wrath of some of America's most privileged lib journos in order to expose their efforts to hide their backgrounds from the public; UPDATED
Twitchy
Watch: Joe Biden Arrives in Florida but One Moment With Ron DeSantis Stole the Show
Redstate
5 Years After Las Vegas Concert Shooting, an FBI Whistleblower Reveals Probable Motive
PJ Media