Politics and a "Time Horizon" 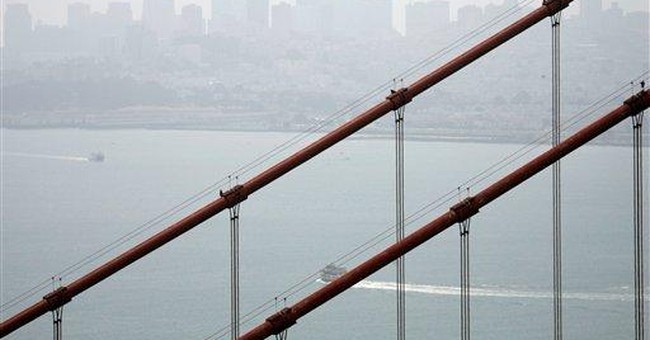 SAN FRANCISCO -- California's former and perhaps future governor, Jerry Brown, says it took him 13 minutes to get here from Oakland, where he was mayor for eight years and now lives. He came on BART, the transit system launched by his father Pat, who was Democratic governor for two terms until beaten by Ronald Reagan in 1966, which ended a political career that began in 1928 when Pat ran unsuccessfully, as a Republican, for the state Assembly.

For 80 years a Brown has been active in California politics, and if Sen. Dianne Feinstein, who will be 77 in 2010, does not run for governor, Jerry Brown, who is now attorney general, probably will, although he says being governor "is an impossible task and anyone will leave discredited." Then why try? Because, he says, he is, in the formulation of the Italian Communist Antonio Gramsci, a pessimist of the intellect but an optimist of the will. He was 36 when he replaced a congenital optimist, Reagan, as governor, and will be twice that age when Gov. Arnold Schwarzenegger limps back to Los Angeles.

Feinstein is wealthy, well-known and popular, so she can wait until 2010 to decide, thereby paralyzing other possible Democratic candidates. If she then does not run, Brown's name recognition will make him the front-runner. His last year as governor was 1982, when there were 24.5 million Californians. Now there are 38 million, most of whom have only vague, if any, memories of him as governor. But in this megastate, becoming known can cost a fortune, and his name is known from Oregon's border to Mexico's. That is why he says he may become the last gubernatorial nominee not rich enough to personally finance his campaign. Besides, he says, in a "TiVo world," where people watch only what they select and "political news is not as salient as it used to be," a famous name becomes more salient.

Brown, who was 7 when the Second World War ended, remembers rationing and sometimes -- when the former seminarian is in a San Francisco frame of mind, fretting about "unsustainable" growth and celebrating monastic asceticism -- he seems to regret the end of it. But the realist in him dryly notes that the dreamy legislation Schwarzenegger signed that requires greenhouse gas emissions to be reduced to 1990 levels by 2020 -- when there will be 16 million more Californians than there were in 1990 -- does not begin to bite until 2012, when Schwarzenegger will be gone.

Brown, a Catholic in everything but theology, regrets the end of the Latin Mass and three years ago had Gregorian chants and medieval music at his wedding. But he is dubious about certain important dogmas -- the incarnation, Heaven, etc. -- and it is difficult to discern his political beliefs, beyond a weary acceptance of the fact that in this megastate, which is planted thick with factions fiercely protective of the status quo, whoever becomes governor at the sufferance of those factions can only nibble at the edges of problems. The state government, which is hemorrhaging red ink, is heavily dependent on income taxes, which are volatile, and thanks to the state's populist tradition, initiatives promoted by the public education lobby and other factions have restricted budget flexibility.

When as Oakland's mayor he launched a military school for low-income children, he endured protesters who were, he says, suffering "misplaced concreteness." These gray-bearded "remnants" of the anti-Vietnam War movement "were looking for a war to protest." He preserved the school, promoted condominiums "to bring disposable income" back to the inner city, increased the number of charter schools from three to 24, expanded the police force and subsidized the arts to make Oakland attractive.

BART helped, by making San Francisco an easy commute, although he says the construction of BART "devastated" Oakland for a while. The moral of the story, he says, is that politics requires a long "time horizon" -- to fix California, 40 years. Meanwhile, he fumes that the proposed $50 million net to deter suicidal jumpers from the Golden Gate Bridge is an unaffordable "luxury."

In "The Unbearable Lightness of Being," a novel Brown admires, Milan Kundera writes: "Human time does not turn in a circle; it runs ahead in a straight line. That is why man cannot be happy: happiness is the longing for repetition." Brown, with Sacramento on his mind, happily heads back to Oakland, using a BART fare card purchased, he notes, with a senior citizen's discount.