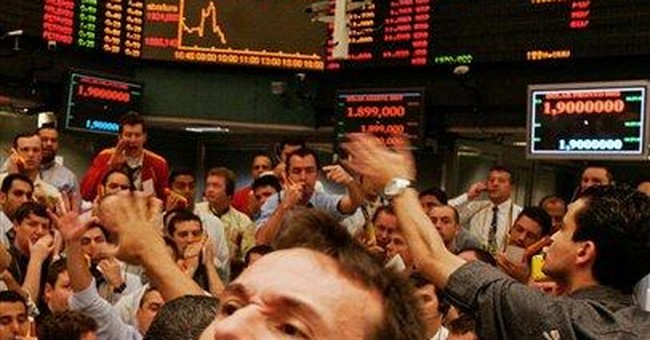 WASHINGTON -- Exactly a century ago, panic seized financial markets. The collateral for perhaps half the bank loans in New York was securities whose values had been inflated by speculation. Then on Saturday night, Nov. 2, 1907, a 70-year-old man gathered some fellow financiers at his home at 36th and Madison in Manhattan. The next morning, a New York Times headline proclaimed:

"BANKERS CONFER WITH MR. MORGAN
Long Discussion in His Library
Not Ended Until 4 O'Clock"

Both the Times and The Washington Post ("BANKERS IN CONFERENCE: Money Stringency and Remedial Measures Discussed in Morgan's Library") noted that bankers shuttled between meetings at Morgan's mansion and the Waldorf-Astoria (then at 5th Avenue and 33rd Street) in a newfangled conveyance -- an automobile. Working 19 hours a day, and restricting himself on doctor's orders to 20 cigars a day, J.P. Morgan seemed so heroic that the president of Princeton University, Woodrow Wilson, said the financier should chair a panel of intellectuals who would advise the nation on its future.

Six years later, however, under Wilson as the nation's president, the Federal Reserve System was created, ending the era when a few titans of finance could be what central banks now are -- the economy's "lenders of last resort." Central banks have been performing that role during today's turmoil in the market for subprime mortgages -- those granted to the least creditworthy borrowers.

The ill wind blowing through that market has blown two goods: The public mind has been refreshed regarding the concept of moral hazard. And the electorate has been reminded of just how reliably liberal Hillary Clinton is.

Moral hazard exists when a policy produces incentives for perverse behavior. One such existing policy is farm price supports that reduce the cost to farmers of overproduction, and even encourage it. Another is the policy of removing tens of millions of voters from the income tax rolls, thereby making government largesse a free good for them.

And this would be such a policy: the Federal Reserve lowering the cost of money whenever risky lending to a sector of the economy (e.g., housing) makes that sector desperate for lower interest rates. Many banks, hedge funds and other institutions have pocketed profits from their dealings in the subprime market. The losses are theirs, too.

Clinton leapt to explain the subprime problem in the terms of liberalism's master narrative -- the victimization of the many by the few. In a speech favorably contrasting a "shared responsibility" society with an "on your own" society, she said, in effect, that distressed subprime borrowers are not responsible for their behavior. "Unsavory" lenders, she said, had used "unfair lending practices." Doubtless there are as many unsavory lenders as there are unsavory politicians. So, voters and borrowers: caveat emptor.

But this, too, is true: Every improvident loan requires an improvident borrower to seek and accept it. Furthermore, when there is no penalty for folly -- such as getting a variable-rate mortgage that will be ruinous if the rate varies upward -- folly proliferates. To get a mortgage is usually to commit capitalism; it is to make an investment in the hope of gain. And if lenders know that whenever they go too far and require inexpensive money the Federal Reserve will provide it with low interest rates, then going too far will not really be going too far.

In 2008, as voters assess their well-being, several million households with adjustable-rate home mortgages will have their housing costs increase. Defaults, too, will increase. That will be a perverse incentive for the political class to be compassionate toward themselves in the name of compassion toward borrowers, with money to bail out borrowers. If elected politicians controlled the Federal Reserve, they would lower interest rates. Fortunately, we have insulated the Federal Reserve from democracy.

The Federal Reserve's proper mission is not to produce a particular rate of economic growth or unemployment, or to cure injuries -- least of all, self-inflicted ones -- to certain sectors of the economy. It is to preserve the currency as a store of value -- to contain inflation. The fact that inflation remains a worry is testimony to the fundamental soundness of the economy, in spite of turbulence in a small slice of one sector.

Ron Chernow, in his book "The House of Morgan: An American Banking Dynasty and the Rise of Modern Finance" (1990), says Morgan's 1907 rescue was the last time private bankers "loomed so much larger than regulators in a crisis. Afterward, the pendulum would swing decidedly toward government financial management." Happily, Chairman Ben Bernanke's Federal Reserve remains committed to minimal management, which is what government does best.