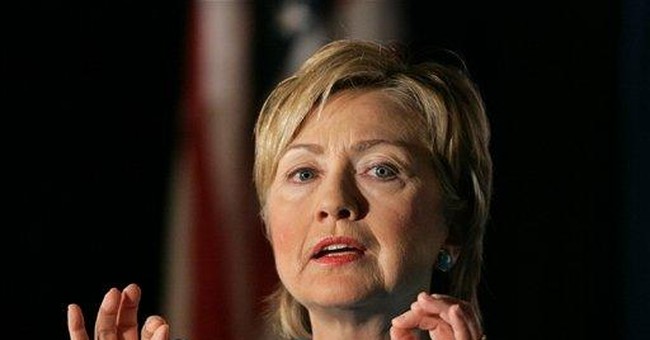 WASHINGTON -- Some mornings during the autumn of 1933, when the unemployment rate was 22 percent, the president, before getting into his wheelchair, sat in bed, surrounded by economic advisers, setting the price of gold. One morning he said he might raise it 21 cents: "It's a lucky number because it's three times seven." His treasury secretary wrote that if anybody knew how gold was priced "they would be frightened."

The Depression's persistence, partly a result of such policy flippancy, was frightening. In 1937, during the depression within the Depression, there occurred the steepest drop in industrial production ever recorded. By January 1938 the unemployment rate was back up to 17.4 percent. The war, not the New Deal, defeated the Depression. Franklin Roosevelt's success was in altering the practice of American politics.

This transformation was actually assisted by the misguided policies -- including government-created uncertainties that paralyzed investors -- that prolonged the Depression. This seemed to validate the notion that the crisis was permanent, so government must be forever hyperactive.

In his second inaugural address Roosevelt sought "unimagined power" to enforce the "proper subordination" of private power to public power. He got it, and the fact that the federal government he created now seems utterly unexceptional suggests a need for what Amity Shlaes does in a new book. She takes thorough exception to the government he created.

Republicans had long practiced limited interest-group politics on behalf of business with tariffs, gifts of land to railroads and other corporate welfare. Roosevelt, however, made interest-group politics systematic and routine. New Deal policies were calculated to create many constituencies -- labor, retirees, farmers, union members -- to be dependent on government.

Before the 1930s, the adjective "liberal" denoted policies of individualism and individual rights; since Roosevelt it has primarily pertained to the politics of group interests. So writes Shlaes, a columnist for Bloomberg News, in "The Forgotten Man: A New History of the Great Depression." She says Roosevelt's wager was that, by furiously using legislation and regulations to multiply federally favored groups, and by rhetorically pitting those favored by government against the unfavored, he could create a permanent majority coalition.

In the process, says Shlaes, Roosevelt refined his definition of the "forgotten man." This man had been thought of as a general personality, compatible with the assumption that Americans were all in it together. "Now, by defining his forgotten man as the specific groups he would help, the president was in effect forgetting the rest -- creating a new forgotten man. The country was splitting into those who were Roosevelt's favorites and everyone else."

Acting with what Shlaes calls "the restlessness of the invalid," Roosevelt implemented the theory that (in her words) "spending promoted growth, if government was big enough to spend enough." In only 12 months, just one Roosevelt improvisation, the National Recovery Administration, "generated more paper than the entire legislative output of the federal government since 1789."

Before Roosevelt, the federal government was unimpressive relative to the private sector. Under Calvin Coolidge, the last pre-Depression president, its revenues averaged 4 percent of GDP, compared to 18.6 percent today. In 1910, Congress legislated height limits for Washington buildings, limits that prevented skyscrapers, symbols of mighty business, from overshadowing the Capitol, the symbol of government.

In 1936, for the first time in peacetime history, federal spending exceeded that of the states and localities combined. Roosevelt said modern "civilization" has tended "to make life insecure." Hence Social Security, which had the added purpose of encouraging workers to retire, thereby opening jobs to younger people. Notice the assumptions of permanent scarcity, and that the government has a duty to distribute scarce things, such as work.

In 1938, when the New Deal's failure to spark recovery made Roosevelt increasingly frantic, he attempted to enlarge the Supreme Court so he could pack it with compliant justices. He said Americans had the right to "insist that every agency of popular government" respond to "their will." He included the court among "popular," meaning political and representative, institutions.

Roosevelt's overreaching called forth an opponent whom Shlaes rescues from obscurity. Wendell Willkie, who would be Roosevelt's opponent in a 1940 election overshadowed by war, called upon Roosevelt to "give up this vested interest you have in depression" as the justification for a "philosophy of distributed scarcity."

War, as has been said -- and as George W. Bush's assertion of vast presidential powers attests -- is the health of the state. But as Roosevelt demonstrated and Shlaes reminds us, compassion, understood as making the "insecure" securely dependent, also makes the state flourish.