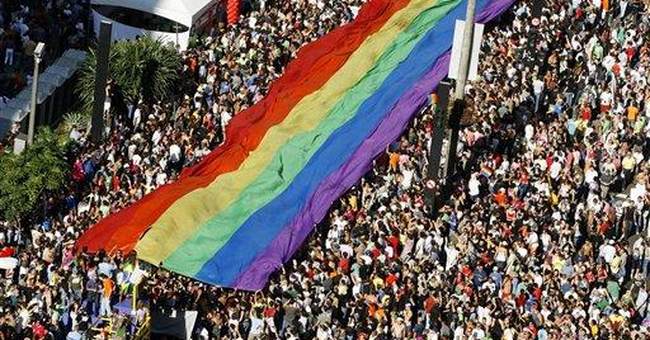 WASHINGTON -- Marriage is the foundation of the natural family and sustains family values. That sentence is inflammatory, perhaps even a hate crime.

At least it is in Oakland, Calif. That city's government says those words italicized here constitute something akin to hate speech, and can be proscribed from the government's open e-mail system and employee bulletin board.

When the McCain-Feingold law empowered government to regulate the quantity, content and timing of political campaign speech about government, it was predictable that the right of free speech would increasingly be sacrificed to various social objectives that free speech supposedly impedes. And it was predictable that speech suppression would become an instrument of cultural combat, used to settle ideological scores and advance political agendas by silencing adversaries.

That has happened in Oakland. And, predictably, the ineffable 9th U.S. Circuit Court of Appeals has ratified this abridgement of First Amendment protections. Fortunately, overturning the 9th Circuit is steady work for the U.S. Supreme Court.

Some African-American Christian women working for Oakland's government organized the Good News Employee Association (GNEA), which they announced with a flier describing their group as ``a forum for people of Faith to express their views on the contemporary issues of the day. With respect for the Natural Family, Marriage and Family Values.''

The flier was distributed after other employees' groups, including those advocating gay rights, had advertised their political views and activities on the city's e-mail system and bulletin board. When the GNEA asked for equal opportunity to communicate by that system and that board, they were denied. Furthermore, the flier they posted was taken down and destroyed by city officials, who declared it ``homophobic'' and disruptive.

The city government said the flier was ``determined to promote harassment based on sexual orientation.'' The city warned that the flier and communications like it could result in disciplinary action ``up to and including termination.''

Effectively, the city has proscribed any speech that even one person might say questioned the gay rights agenda and therefore created what that person felt was a ``hostile environment.'' This, even though gay rights advocates used the city's communication system to advertise ``Happy Coming Out Day.'' Yet the terms ``natural family,'' ``marriage'' and ``family values'' are considered intolerably inflammatory.

The treatment of GNEA illustrates one technique by which America's growing ranks of self-appointed speech police expand their reach: They wait until groups they disagree with, such as GNEA, are provoked to respond to them in public debates, then they persecute them for annoying those to whom they are responding. In Oakland, this dialectic of censorship proceeded on a reasonable premise joined to a preposterous theory.

The premise is that city officials are entitled to maintain workplace order and decorum. The theory is that government supervisors have such unbridled power of prior restraint on speech in the name of protecting order and decorum that they can nullify the First Amendment by declaring that even the mild text of the GNEA flier is inherently disruptive.

The flier supposedly violated the city regulation prohibiting ``discrimination and/or harassment based on sexual orientation.'' The only cited disruption was one lesbian's complaint that the flier made her feel ``targeted'' and ``excluded.'' So anyone has the power to be a censor just by saying someone's speech has hurt his or her feelings.

Unless the speech is ``progressive.'' If GNEA claimed it felt ``excluded'' by advocacy of the gay rights agenda, would that advocacy have been suppressed? Of course not -- although GNEA's members could plausibly argue that the city's speech police have created a ``hostile workplace environment'' against them.

A district court affirmed the city's right to impose speech regulations that are patently not content neutral. It said the GNEA's speech interest -- the flier -- is ``vanishingly small.'' GNEA, in its brief asking the U.S. Supreme Court to intervene, responds that some of the high court's seminal First Amendment rulings have concerned small matters, such the wearing of a T-shirt, standing on a soapbox, holding a picket sign and ``other simple forms of expression.''

Congress is currently trying to enact yet another ``hate crime'' law that would authorize enhanced punishments for crimes committed because of, among other things, sexual orientation. A coalition of African-American clergy, the High Impact Leadership Coalition, opposes this, fearing it might be used ``to muzzle the church.'' The clergy argue that in our ``litigation prone society'' the legislation would result in lawsuits having ``a chilling effect'' on speech and religious liberty. As the Oakland case demonstrates, that, too, is predictable.