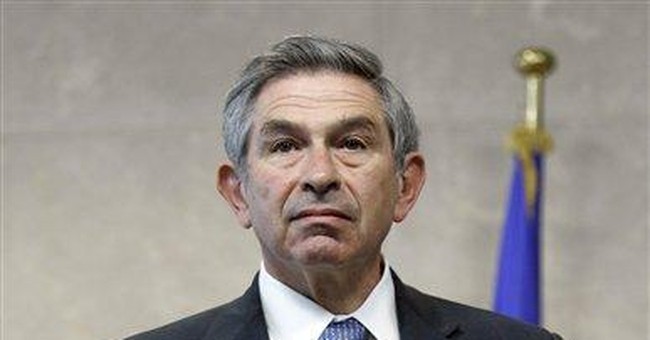 The kerfuffle over whether Paul Wolfowitz, the World Bank's president, behaved badly regarding the contract for his companion to facilitate her departure from the bank involves no large issue. The bank's existence does. The bank's rationale, never strong, has evaporated.

Born in 1944, at the apogee of confidence in governments and international governmental organizations, the bank's mission is ``to fight poverty with passion and professionalism.'' The great prerequisite for curing poverty is, however, economic growth, and the world has learned, during a 63-year retreat from statism, that the prerequisite for growth is free markets allocating private capital to efficient uses.

Much of what recipient countries save by receiving the bank's subsidized loans they pay in the costs of ``technical assistance,'' the euphemism for being required to adopt the social agendas of rich nations' governments that fund the bank. Those agendas focus on intrusive government actions on behalf of fashionable causes -- the empowerment of women, labor, environmentalists, indigenous peoples, etc.

The bank argues, incoherently, that its clients value the ``technical assistance,'' but that the clients would not adopt it unless bribed -- unless it were a condition of receiving subsidized loans. So the bank subsidizes projects that the client countries do not deem worth financing with money borrowed at market interest rates. As Allan Meltzer of Carnegie Mellon University says, money is fungible: Projects with the highest social or economic return are often dangled in front of the bank to get its loans -- but these projects would have been funded anyway. So, in effect, the bank's loans support marginal projects that would not have been funded without the loans.

It is difficult to demonstrate that World Bank loans have produced growth, let alone as much growth as private capital would have produced. Furthermore, when the bank provides debt relief, it creates what economists call moral hazard, an incentive for perverse behavior -- particularly, improvident borrowing. The bank's transactions with nongovernmental organizations are, strictly speaking, irresponsible: To what, or whom, are NGOs, or for that matter the bank, truly accountable?

``We are facing ... competition (from the capital markets). I think it's important that we effectively compete. Increasingly ... if the fight against poverty is successful, more and more countries will be in this middle-income category, and if this institution is going to remain relevant to the world, it obviously needs to be relevant to the middle-income countries.''

Wolfowitz's words are those of a man who has been in government much too long. He says private capital markets have become competitive with the bank's functions. But when those markets are not ``competitive,'' that means only that they question the value added by loans the World Bank has wanted to make. That is the meaning of the capital markets' supposed bias against developing countries. If those markets are now eager to compete with the World Bank for clients, it is time for the bank to get out of the way.

The World Bank's problem, as Wolfowitz seems to see it, is humanity's blessing: Middle-income countries are proliferating. This means that the bank is losing its battle to retain whatever relevance it once had. The bank's real mission statement is the non sequitur that makes government undertakings immortal: We were created for a reason, therefore there must forever be a reason for us to exist.

When the bank was born, a war-shattered world was haunted by memories of the collapse of global trade in the 1930s. Capital markets in the late 1940s were small and risk-averse. Today the problems the bank was created to address are long gone. The world is awash in capital available at low rates. For example, China's central bank has $1.2 trillion in foreign reserves and more than $60 billion arrives annually in direct investment by investment bankers flush with cash.

It is said that the Wolfowitz matter might damage the bank's reputation. But its reputation that matters concerns the waste and corruption that inevitably attend the political yet unaccountable distribution of many billions of dollars.

It is said that unless Wolfowitz goes, some donor governments might withhold funds. At the bank, the right thing, even done for a silly reason, would be an improvement.