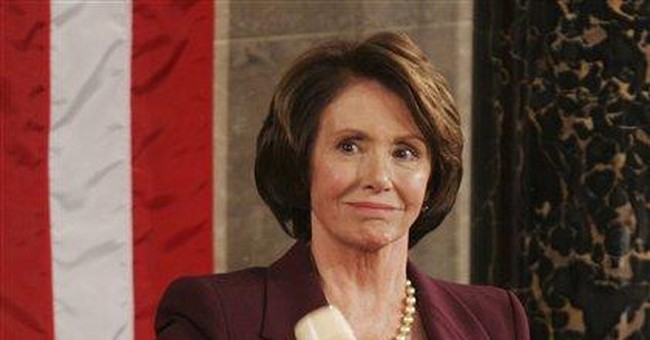 Tom Cole earned a Ph.D. in British history from the University of Oklahoma, intending to become a college professor, but he came to his senses and to a zest for politics and now, in just his third term in the House of Representatives, he is chairman of the National Republican Congressional Committee. As such, he is charged with recruiting the candidates and honing the tactics that will transform Speaker Nancy Pelosi back to House minority leader. ``We are looking,'' says Cole, speaking unminced words about the Republican Party, ``like a beaten down stock.'' Nevertheless, he is sanguine regarding 2008: ``The positioning is good for us'' because ``we don't have to conquer new territory, we have to reclaim old territory.''

That is, 61 Democrats represent districts that George W. Bush carried in 2004. A 16-seat gain in 2008 would restore Republican control to the House.

Consider the second district in Kansas. Jim Ryun held the seat easily for five terms. In 2006, he lost to Nancy Boyda, who won with just 50.6 percent. In 2008, President George W. Bush will not be, as he was in 2006, a burden at the top of the ticket. And Kansas' popular Republican senator, Pat Roberts, will be on the ticket. And Kansas' popular Democratic governor, Kathleen Sebelius, who helped Democrats down the ballot in 2006, will be in the middle of her second term.

Might Democrats gain some seats they nearly won in 2006 -- for example, the then-open Chicago-area seat previously held for 16 terms by Republican Henry Hyde? The Democrats' novice candidate, Tammy Duckworth, who lost both legs in the Iraq War, got 48.65 percent against Republican Peter Roskam. Cole says he hopes the Democrats will throw resources at that seat because they will be wasting dollars, given that they could not win it as an open seat. He is too polite to add that they could not win it with Bush as a weight in Republican saddles.

Although Cole is playing to win, and expects to win, in 2008, retaking the House may be, he says, ``a two-step dance for us.'' He thinks Republicans have a good chance of winning control, even if they do not win the White House. He notes that after Republicans lost 48 House seats in 1958, they gained 21 seats in 1960, when John Kennedy was narrowly elected president. And if Republicans do not win control of the House in 2008 and a Democrat is elected president, Republicans have a really excellent chance of capturing the House in 2010, because the party that wins the presidency usually loses House seats in the next midterm election.

Cole wishes he ``could make every (Republican) donor watch C-SPAN,'' to see what House Democrats are doing. He can't, but he savors such attention-riveting events as Pelosi's trip to Syria, which he thinks was so ``wonderful'' for Republicans he would gladly finance a trip by her to Iran.

The last time House Republicans suffered a defeat as large as they did in 2006 (30 seats lost) was in the 1974 post-Watergate election (48 seats lost). That was the year their third-ranking leader was born -- Florida's Adam Putnam, the House Republican Conference chairman.

Still, Democrats have their smallest House majority since 1955. And Republicans still hold 10 more seats than they did at their peak during Ronald Reagan's presidency. This, in spite of the fact that Bush lost the popular vote in 2000, and his winning margin of 2.5 points in 2004 was the smallest in history for a re-elected president.

Americans seem to like the government at least somewhat divided. They are apt to have that for a while.

The Coma Before the Storm
Townhall
'You are the ones with the perversions': Stand-up comic wants to know why Matt Walsh doesn't find joy in a young girl twerking
Twitchy
HOT TAKES: CNN's Chris Cillizza Tries Giving Rand Paul a U.S. History Lesson, Probably Now Regrets It
Redstate
BREAKING: The Babylon Bee Scores a Major Victory Over The New York Times
PJ Media