Federal Aid to the Southern Plains 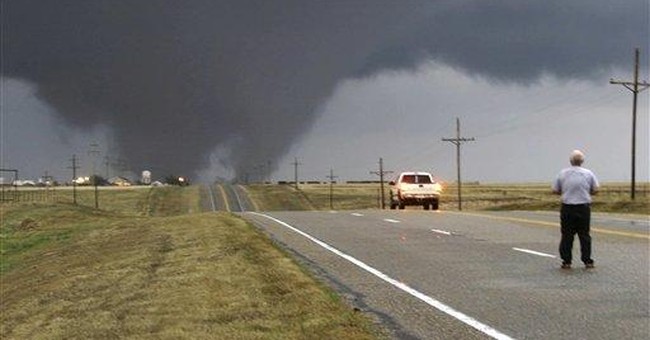 ``The soil is the one indestructible, immutable asset that the nation possesses. It is the one resource that cannot be exhausted.''

Seventy-five years ago, America's southern plains were learning otherwise. Today, amid warnings of environmental apocalypse, it is well to recall the real thing. It is a story about the unintended consequences of technological progress and of government policies. Above all, it is an epic of human endurance.

Who knew that when the Turks closed the Dardanelles during World War I, it would contribute to stripping the topsoil off vast portions of Texas, Oklahoma, Colorado and Kansas? The closing cut Europe off from Russian grain. That increased demand for U.S. wheat. When America entered the conflict, Washington exhorted farmers to produce even more wheat, and guaranteed a price of $2 a bushel, more than double the 1910 price. A wheat bubble was born. It would burst with calamitous consequences recounted in Timothy Egan's astonishing and moving book, ``The Worst Hard Time: The Untold Story of Those Who Survived the Great American Dust Bowl.''

After the war, the price plunged and farmers, increasingly equipped with tractors, responded by breaking up more prairie, plowing under ever more grassland in desperate attempts to compensate for falling wheat prices with increased volume. That, however, put additional downward pressure on the price, which was 40 cents a bushel by 1930.

The late 1920s had been wet years, and people assumed that the climate had changed permanently for the better. In that decade, another 5.2 million acres -- equivalent, Egan says, to the size of two Yellowstone Parks -- were added to the 20 million acres previously in cultivation. Before the rains stopped, 50,000 acres a day were being stripped of grasses that held the soil when the winds came sweeping down the plain.

In 1931, the national harvest was 250 million bushels, perhaps the greatest agricultural accomplishment in history. But Egan notes that it was accomplished by removing prairie grass, ``a web of perennial species evolved over 20,000 years or more.'' Americans were about to see how an inch of topsoil produced over millennia could be blown away in an hour.

On Jan. 21, 1932, a cloud extending 10,000 feet from ground to top -- a black blizzard with, Egan writes, ``an edge like steel wool'' -- looked like ``a range of mountains on the move'' as it grazed Amarillo, Texas, heading toward Oklahoma. At the end of 1931, a survey found that of the 16 million acres cultivated in Oklahoma, 13 million were seriously eroded.

On May 10, 1934, a collection of dust storms moved over the Midwest carrying, Egan says, ``three tons of dust for every American alive.'' It dumped 6,000 tons on Chicago that night. By morning, the storm was 1,800 miles wide -- ``a great rectangle of dust'' weighing 350 million tons -- and was depositing the surface of the Great Plains on New York City, where commerce stopped in the semi-darkness.

On the southern plains, dust particles, one-fifth the size of the period at the end of this sentence and high in silica content, penetrated lungs, jeopardizing newborns and causing ``dust pneumonia'' in others. Houses were so porous that the only white part of a pillow in the morning was the profile of the sleeper. Storms in March and April 1935 dumped 4.7 tons of dust per acre on western Kansas, denting the tops of cars. During one storm, the wind blew at least 40 miles per hour for 100 hours Egan reports that it would have required a line of trucks 96 miles long, hauling 10 loads a day for a year -- 46 million truckloads -- to transport the dirt that had blown from western to eastern Kansas.

In Washington, in a Senate hearing room, a man was testifying to bored legislators about the need for federal aid for the southern plains. A senator suddenly exclaimed, ``It's getting dark outside.'' The sun vanished and the air turned copper-color, thanks to red dust that the weather bureau said came from the western end of Oklahoma's panhandle. The aid was approved the next day.

The southern plains got what Egan calls frenzied skies of grasshoppers -- sometimes 14 million per square mile -- because the insects' natural predators were gone. Eventually, however, rain fell on the convulsed land and on the tenacious people who never left it, and the government devised soil conservation measures. The Earth turned out to be more durable, and the people who wrested their livings from the earth more resilient, than had been thought.