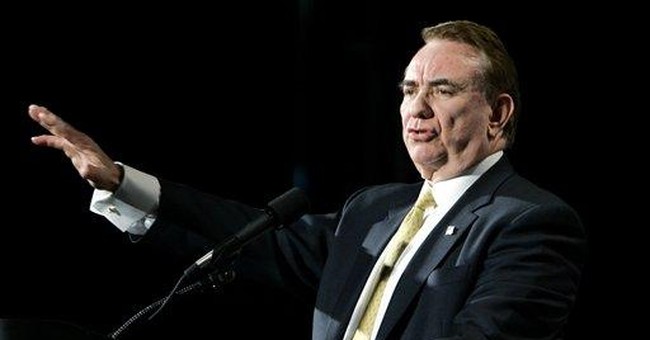 WASHINGTON -- In the last 24 elections, since 1912, winners of the presidency won a plurality of the states along the Mississippi. Today the Republican presidential candidate with perhaps the most impressive resume says:

Republicans should assume that in 2008 they will lose Ohio (20 electoral votes), where the state party's corruption and incompetence cost it the governorship, a U.S. Senate seat and a House seat in 2006. So the GOP candidate must carry Iowa, Wisconsin and Minnesota (27 electoral votes). In 2004, George W. Bush narrowly carried Iowa and narrowly lost Wisconsin and Minnesota, the only state that has voted Democratic in eight consecutive elections.

The man with the impressive resume is Tommy Thompson, who says he can carry those three Midwestern states. He served four terms as Wisconsin's governor, and four years (2001-2005) as secretary of health and human services, where he presided over a $580 billion budget, larger than the combined budgets of the eight largest states.

Regarding Iraq, he would challenge that country's government to re-legitimize the U.S. presence by voting to ask U.S. forces to remain. If the government does not, the U.S. would leave. If it does, it should then encourage voluntary ethnic rearrangements by establishing federalism -- strong governments in all 18 provinces -- where Sunnis, Shiites and Kurds can cluster under governments of their kind. Then it should divide oil revenues, one-third to the national government, one-third to the provincial governments and one-third to Iraqi individuals, much as Alaska does with its oil trust fund.

As governor, Thompson was the progenitor of what became the greatest social policy success of the 1990s, the national welfare reform of 1996 that has reduced the states' welfare rolls an average of 60 percent. He is even prouder of his efforts for school choice. He announced his presidential campaign at Messmer High School in Milwaukee, an inner-city Catholic institution that has flourished in the competition for students and in its freedom from educational bureaucracy: 90 percent of its graduates continue their education at college or vocational or technical schools. Do Iowans ask him about education? With characteristic bluntness, he says: ``No, but I talk about it.''

In seven years, health care will, he says, devour $4 trillion annually, which will be 21 percent of GDP. It is, he argues, irrational to spend just 7 percent on prevention of sickness and 93 percent on treatment of sickness. Seventy-five percent of health spending goes to treat the 125 million Americans who have one or more chronic illnesses, such as type 2 diabetes, which is related to the epidemic of obesity. In five years, or sooner, such diabetes may involve 62 million Americans and cost $400 billion. Sixty percent of these cases could, he says, be prevented by walking 30 minutes a day and losing 5 percent to 10 percent of body weight.

He has not yet lost much weight raising money, but expects to have the $2.5 million he thinks will enable him to win Iowa. It, he thinks, will be a slingshot that hurls him toward Feb. 5, when perhaps 21 states will vote. Win Iowa, he says, and New Hampshire becomes winnable. Then, propelled by free media attention, on Feb. 5 he can be leading the few surviving candidates. He says he would bet $100 to $5 that his better-financed Republican rivals would swap their money for his organization in Iowa, where he has visited 33 of 99 counties and will concentrate most of his energies, leaving the remainder for New Hampshire and South Carolina.

Still, Thompson is confident the Republican nominee will become president. The Clintons' machine, he says, will whittle Barack Obama down to size, deflect John Edwards and secure Hillary Clinton's nomination, and she, he insists, is unelectable. He says he already has 1,800 Iowa supporters promising to bring five friends each to the straw poll in Ames on Aug. 11, so he is confident he will easily top the 7,418 votes George W. Bush won there in 1999.

Then there is the Sturgis Factor. Thompson, who rides a Milwaukee-made Harley, is a member of the Sturgis Motorcycle Hall of Fame in Sturgis, S.D. (population 6,260). Every August about half a million motorcyclists gather there to enjoy the pleasure of one another's company. This year's gathering (Aug. 6-12) coincides with Iowa's straw poll. It would be a mere 660-mile ride for some Iowa bikers to get from Sturgis to Ames.

We Have Another School Board Hot Mic Fiasco. Want to Guess What Was Said? Hint: It's Full-Blown Woke.
Townhall
Sen. Rand Paul 'launches into transphobic rant' against Dr. Rachel Levine about her support for gender transition surgery for minors
Twitchy
'A Man is a Man and a Woman is a Woman': New York College Student Suspended for Violating Students' Dignity
Redstate
Remember These Names: Three House Republicans Join Dems in Voting to Gut Religious Freedom
PJ Media